Yesterday morning when I went to feed the critters, I noticed Polly wasn't among them. I found her in an adjacent pen, looking miserable. Though she was facing away from me, something seemed unusual about her head. 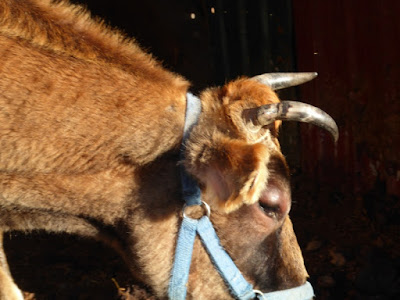 I entered the pen and was horrified to find her face entirely puffed up, her eyes like slits and her jaw with a huge soft bulge. I ran into the house and placed calls to every large-animal vet in the region, only to find none available. 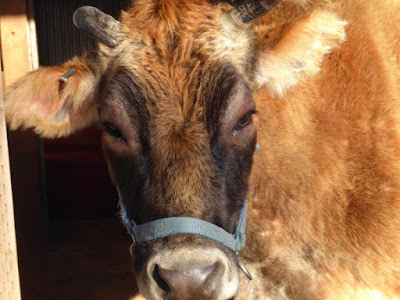 Meanwhile a man stopped by to visit some neighbors. Luis has something of a local reputation as a "horse whisperer" -- he's magic with equines -- and as it turns out, he's highly experienced with cattle as well. He looked at Polly and said she had a large infection, and recommended we get an antibiotic called LA 200.

We ran a string around Polly's midsection, a method for estimating weight in cattle. By this determination, we guessed she weighs 927 lbs. 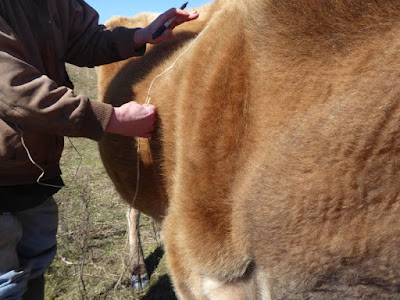 I went into town and purchased the antibiotic. Luis promised to come out this morning to show us the best way to administer it. 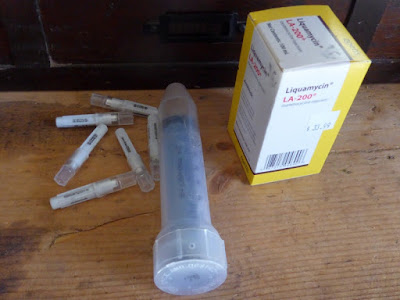 This morning Polly's swollen face looked better, but she kept hunching over and passing bloody urine. Not good. 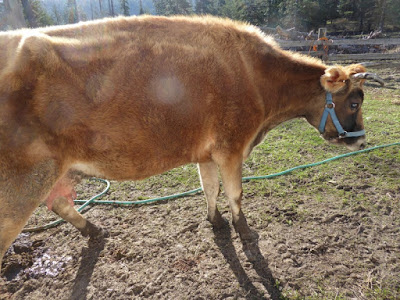 At least she's on her feet. A cow off her feet is very seriously ill indeed. But she's off her food, lethargic, and often just stands slumped.

Luis arrived this morning, and I walked Polly into the squeeze chute. LA-200 supposedly stings going in, and I didn't want anyone (bovine or human) getting hurt in the process. 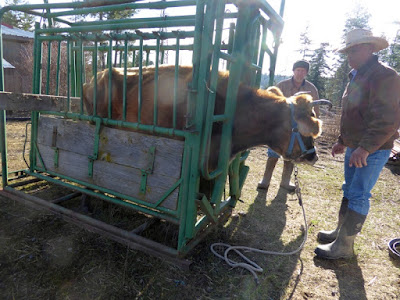 Based on Polly's weight and the recommended dosage, Luis filled the syringe... 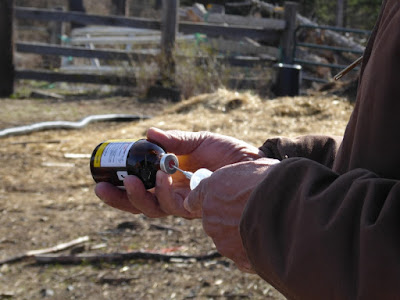 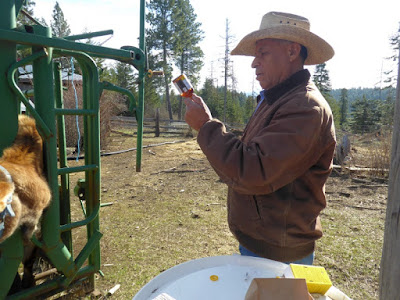 ...then he injected her intramuscularly in three different places (apparently the medicine is best administered spread around). Polly jerked a bit, but she's lethargic and didn't fight. I backed her out of the chute without a problem and returned her to the corral.

We'll give her the next few shots ourselves, repeating the dosage for the next couple of days. According to LA-200 information, she should show "marked improvement" in the next 24 to 48 hours.

I don't want to lose Polly so soon after losing Matilda. We'll be watching her like a hawk.
Posted by Patrice Lewis at 11:05 AM