So many people have offered prayers, consolation, and advice concerning our sick Jersey cow Polly -- thank you all! I'm happy to report she seems much better.

She still had me worried yesterday afternoon. I stepped out into the woods and watched her -- she was nibbling the still-short grass, which was a good sign -- but she was still hunching and passing bloody urine on a frequent basis. (Don't be alarmed by how bony she looks -- that's just a "Jersey" thing.) 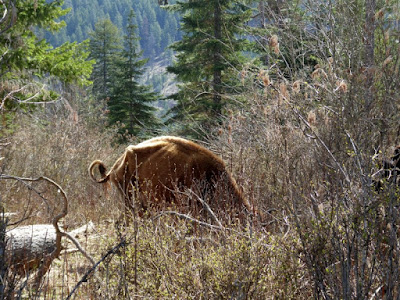 Last evening when Don went to feed, all the other animals bellied up to the feed boxes -- except Polly. At least, at first. After a few minutes and some calling from us, she made her way under the awning and, to our delight, began eating. (That's her calf Anna with her.) 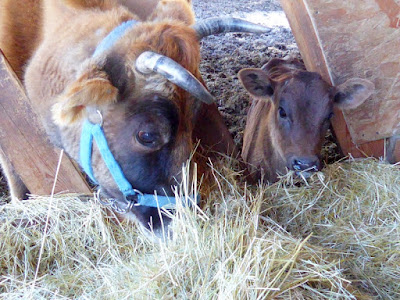 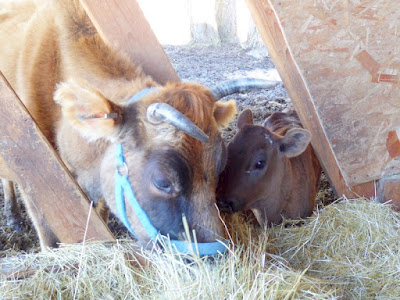 This morning I went to feed the animals, and saw only four cows with their heads in the feed boxes. Four cows, not five. My heart sank a little -- where was Polly? But to my delight, she was right there with the rest of them, eating vigorously, at the far end where I didn't see her at first. 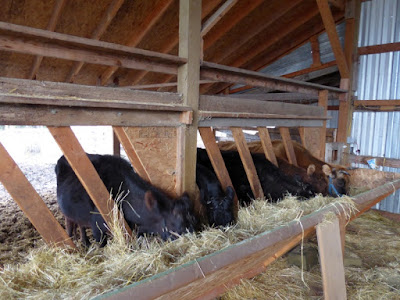 A couple hours later, I hooked her up to the lead rope and put her into the squeeze chute again. This time Don administered the antibiotic shots, and a very fine job he did of it too. After that, I backed Polly out and returned her to the herd. Her eyes are clear and the swelling in her jaw is down, and her urine looks much more normal. 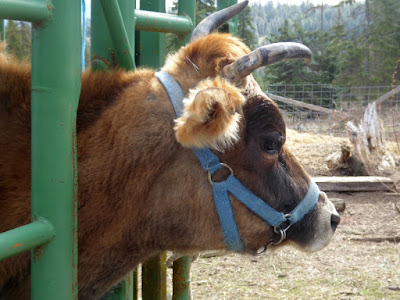 We'll finish out the bottle of antibiotics on her tomorrow and keep an eye on her, but it looks like the crisis is over. She seems well on the road to recovery, thanks to the awesome power of modern medicine.

And reader support.
Posted by Patrice Lewis at 12:11 PM