With our crop of winter calves, we'd been watching Polly, who frankly looked ready to POP. Jerseys get all misshapen just before giving birth, so we're usually not caught by surprise.

So every night I cleaned out the pen and prepared it with soft, fluffy hay, a sort of birthing chamber. Each night I tucked Polly (or whatever pregnant cow looked ready to pop) inside, the logic being I'd rather a middle-of-the-night calf be born on dry hay than outside where the snow is deep. 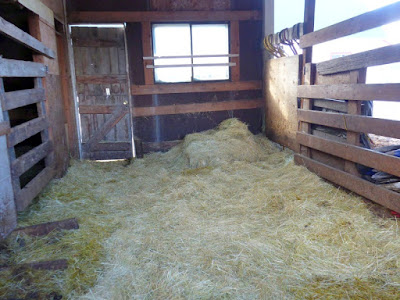 Polly was so huge and her udder so swollen, that during the day when she was out with the rest of the herd, I checked her every couple of hours.

Yesterday morning when I let her out of the barn pen, she was fine and not in labor...but I happened to notice her tail was a bit kinked. Sigh. I should have known that was a sign of early labor, but I didn't follow my instinct.

So a couple hours later when I heard her telltale soft mooing, I checked and saw she had a long strand of mucus hanging out her back end. "Into the barn you go, sweetheart," I told her as I clipped her halter to a lead rope. She followed me docilely enough until I tried to put her in the pen. Then she balked and backed out. That's when I realized -- she wasn't in labor, she'd already dropped her calf. But where was it?

Turns out she had somehow managed to squeeze into the narrow spot between the tractor and the feedboxes, and dropped her calf there. 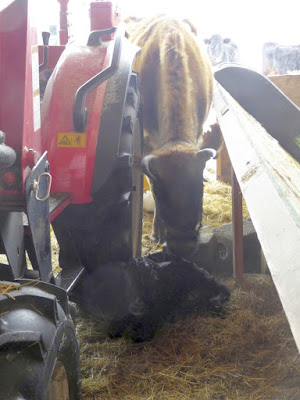 And now she could barely reach it, much less lick it dry. So I picked up the calf and carried it into the pen, while Don clipped Polly to the lead rope and walked her behind. Soon mama and baby were safely ensconced on the dry hay in the sheltered pen, and she got right to work licking her new baby dry. 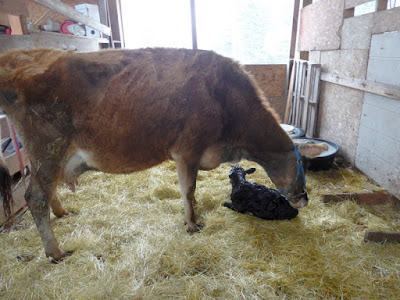 The weather has been snowy though not particularly cold (about 29F), but having the newborn sheltered is important. 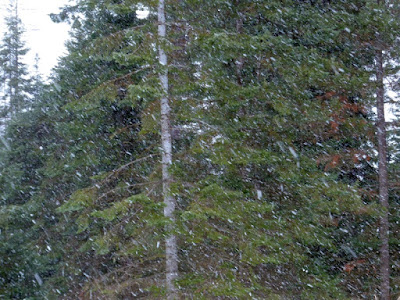 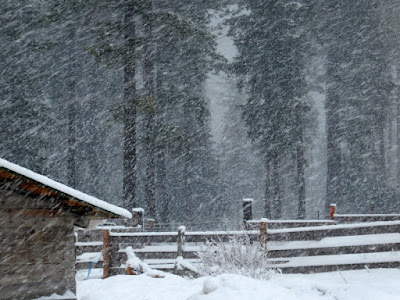 The baby is a heifer, and when I asked Don what we should name her, he said "Anna." Why Anna? "Because she's Polly's Anna," he replied. 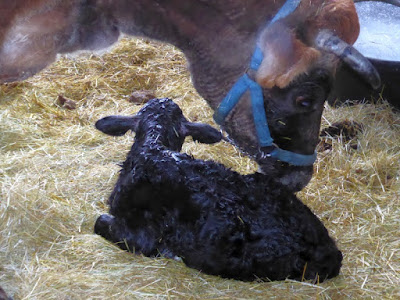 The chickens wandered through to peck at whatever goo Polly dropped in the straw. 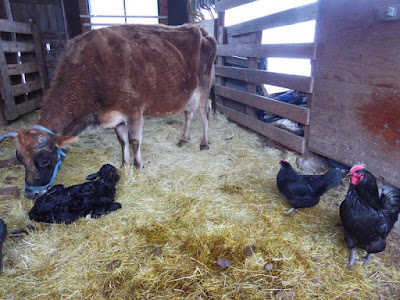 Polly is an excellent mother. It's always wise to be wary with a new mama cow since hormones can do funny things to their behavior, but she was calm as I moved around, taking photos. 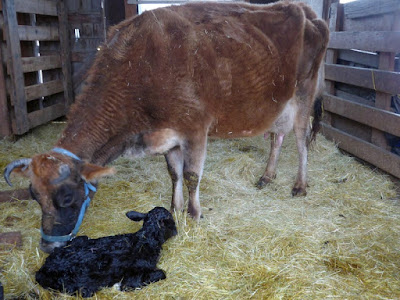 Pretty soon little Anna tried to struggle to her feet, but of course had the usual "crash and burn" tumbles until she got the hang of it. 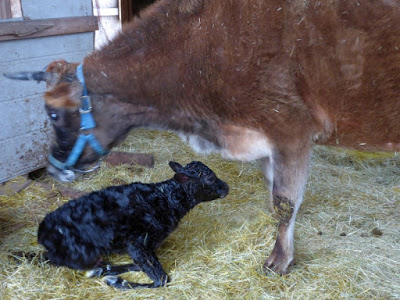 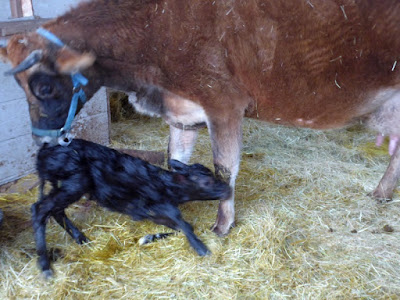 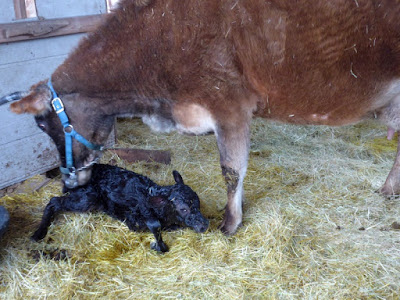 Eventually she made it to her feet. 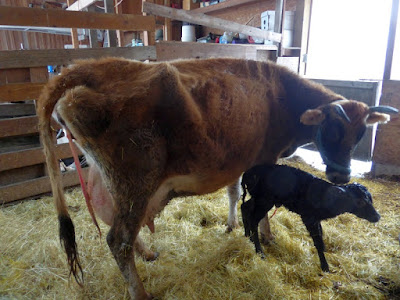 Meanwhile the other cows kept staring at the pen doors, knowing something interesting was going on inside -- even the calves. 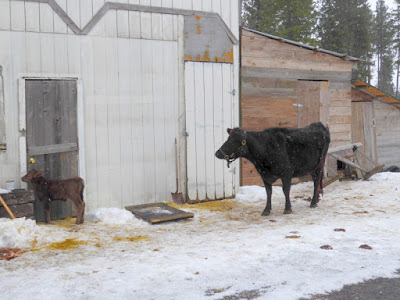 Chickens love hanging around newborn calves because they love the resulting muck. 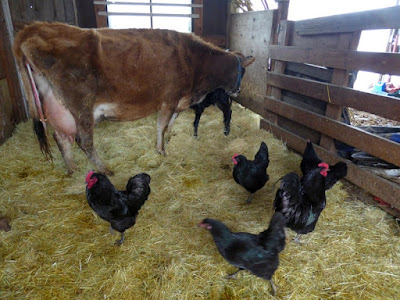 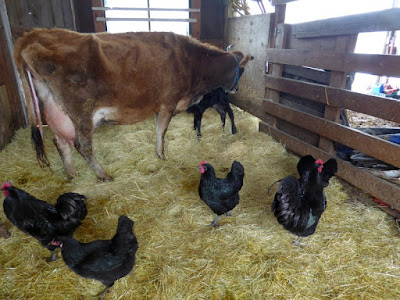 Soon little Anna was nuzzling Polly in all the wrong places, trying to figure out where the udder was. ("I know it's around here somewhere!") It's fascinating to watch instinct at work. 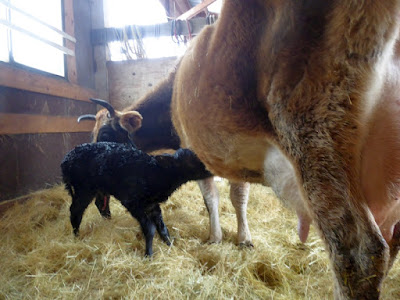 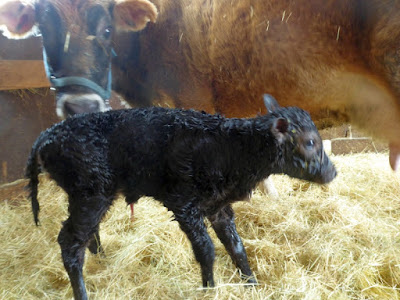 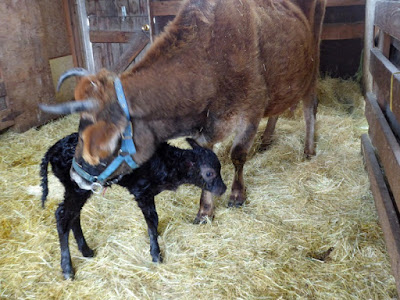 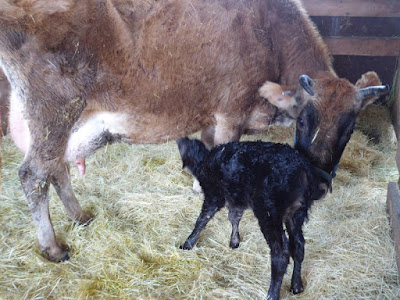 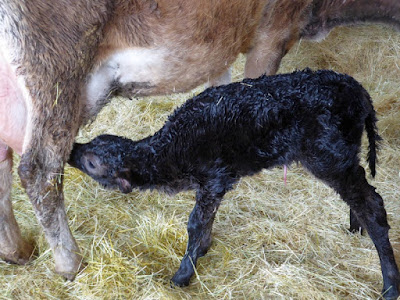 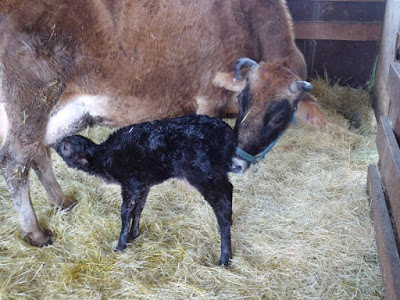 When I checked in later, Polly had dropped the placenta and was in the process of eating it. 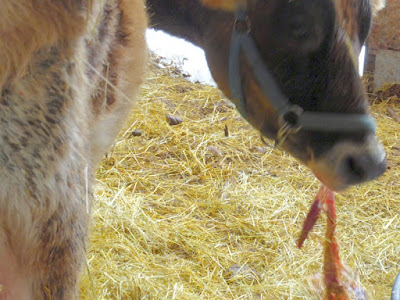 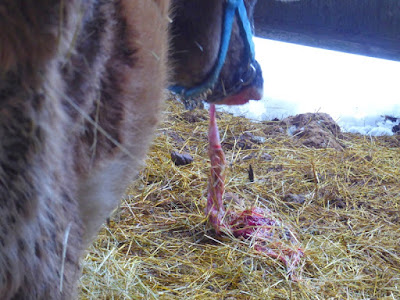 Anna is such a pretty little calf. 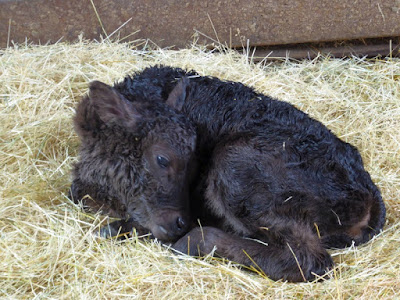 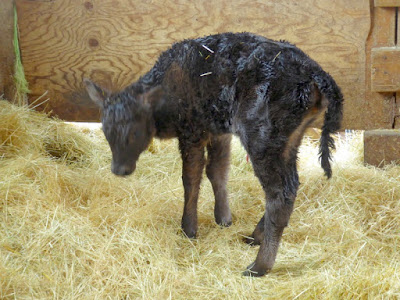 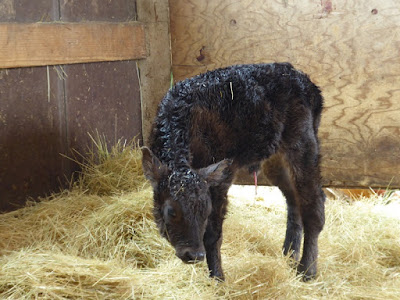 The weather is fairly beastly today, but tomorrow should be much improved and we'll spring Polly from the barn then, and let Anna meet her herd-mates.

Four out of five babies so far. We're keeping an eye on Pixie, Polly's adult calf, who's last.
Posted by Patrice Lewis at 9:43 AM