This was a long journey that began in June when we planted 16 tomato plants. 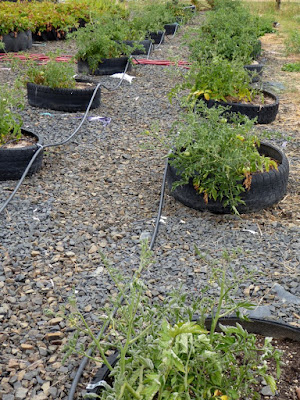 We harvested a few tomatoes here and there, and as I harvested them I used the food strainer to purée them, then froze the purée. 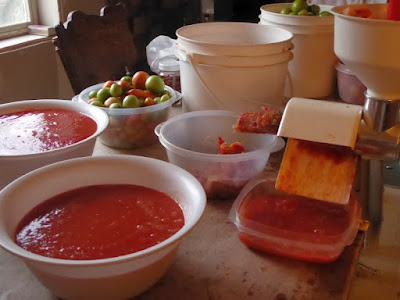 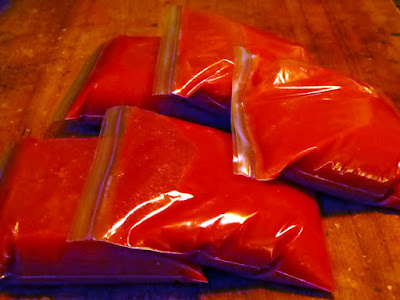 After ripening all the green tomatoes... 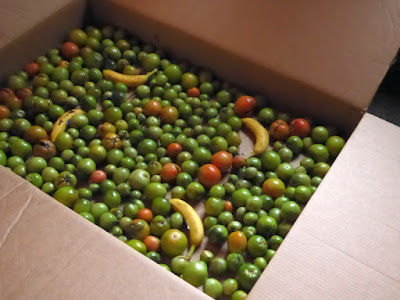 ...and puréeing them, the freezer was stuffed with purée. 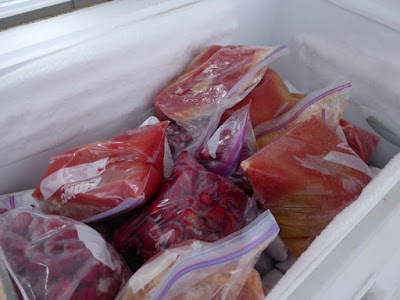 I didn't want to start cooking down the purée into tomato sauce until two things happened: One, all the green tomatoes had ripened; and two, the cookstove was in constant use (as opposed to letting it go out during the day). As December's temperatures dropped and the cookstove was always hot, I started processing the purée.

I defrosted four bags at a time. By letting the frozen bags defrost overnight, some of the watery portions leaked out of the bag and into the bowl. Just that much less to cook down. 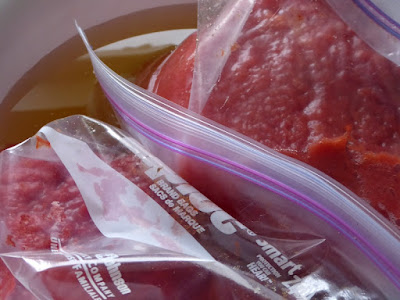 Then it was time to pour it into a large stock pot. 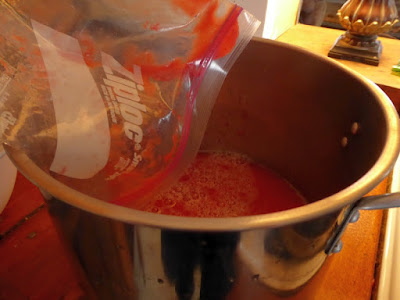 I nested two pots double-boiler style and parked them on the stove. About three times a day, I topped off the water in the lower pot so it wouldn't boil dry. I didn't use a lid, since I wanted the liquid to cook down. 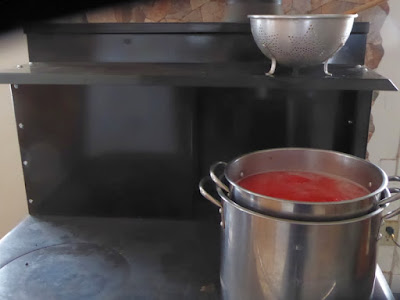 I stirred the purée a few times a day. After one night of cooking, you can see how far down it reduced. 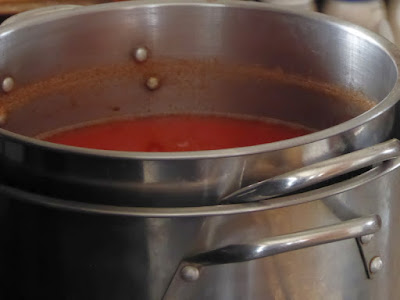 It took about three days for each pot of purée to reduce to sauce consistency. 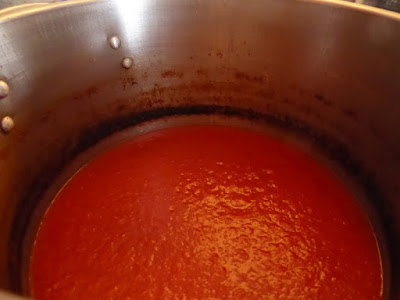 And while it made the house smell rich and tomato-y during this process, I had to repeat it three times to use up all the purée in the freezer. Nine days of smelling cooking tomatoes got to be a bit much. You can also understand why I wanted to use the passive heat from the cookstove to make the sauce. Nine days of cooking the sauce on our propane stove would have used a lot of propane.

I re-froze the first batch of tomato sauce, figuring I'd defrost and can all the sauce at once; but that was the wrong thing to do since I had to re-defrost the sauce and heat it thoroughly (tomato sauce should be hot-packed), plus I could only process so many jars at a time. So from then on I just canned each batch of sauce after it cooked down and while it was still hot, and this worked out far better. 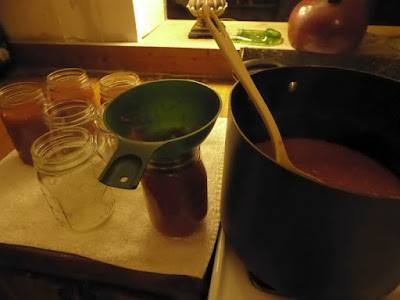 Tomatoes can be water-bath canned (unless there are additives like onions or bell peppers). I never flavor my tomato sauce because I like it to be "generic." That way I can take a jar and flavor it however I like, such as Mexican or Italian or whatever.

Because the acid content of tomatoes, even heirloom varieties, is never assured, it's necessary to add an acidifier. 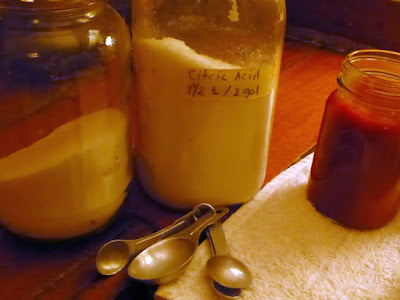 In this case, I added a quarter-teaspoon of citric acid to each pint. (I also added a half-teaspoon of salt to each jar.) 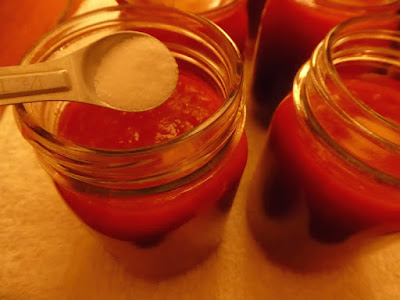 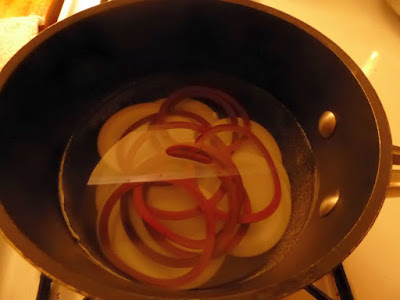 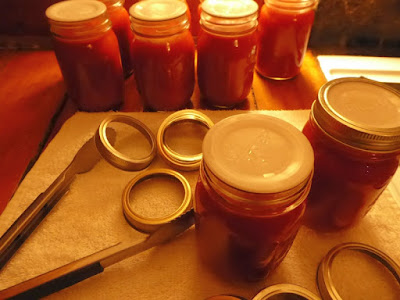 Into the water bath for 30 minutes (actually, about 35 minutes adjusted for our elevation). 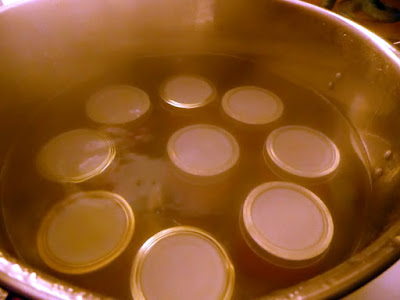 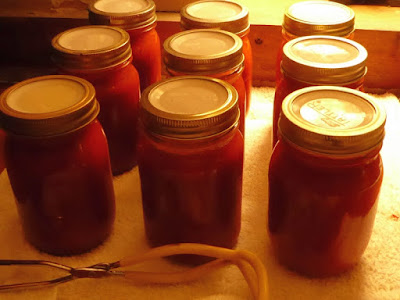 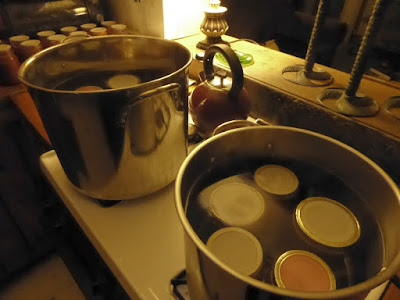 By the time the third and final batch was cooked down and canned up, I was thoroughly sick of tomatoes. 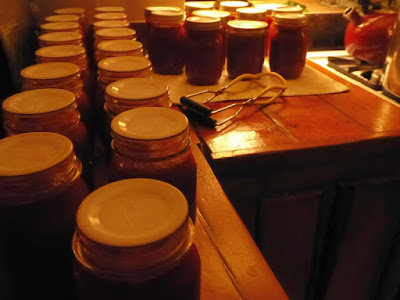 Fortunately that feeling is tempered by the utter satisfaction that comes from concluding a project which was home-grown, from beginning to end, on our farm. 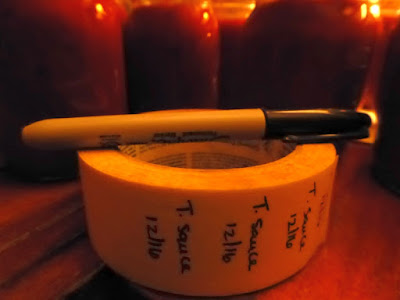 One of the many reasons I love canning. 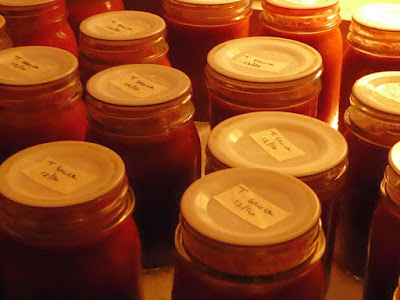