Part of the reason for this is a neighbor's cow had escaped and was happily wandering the road during a time the neighbors were away on an extended trip. This lady is massive -- I want to say she's an Angus but don't quote me on that -- and is not halter broken, so we were unable to hook her up to a lead rope and return her home. For a week she alternated between her home pasture and the rest of the neighborhood, visiting the other bovines over the fence and being social. 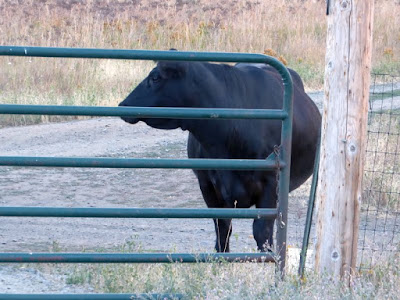 The nice part about living waaaaay off-road is a stray cow is not an emergency. Cowbella (yes, that's her name) was causing no harm and was in no danger of straying into a dangerous spot, so our neighbor said (via phone) not to worry about her and he'd take care of her when he got home. We made sure she had water, but otherwise left her alone except to close our driveway gate to keep her from teasing our bull.

In fact, her wanderings may have to do with being in heat, and our neighbor would like her in with the bull at some point, but that will wait. Meanwhile they got back from their trip and Cowbella is back where she belongs.

Right now the cows are on a neighbor's 20 acre parcel which we lease every year for extra grazing. However due to the unusually hot dry summer we've been having, no grass has regenerated and the grazing is pretty much gone. It's times like this that cows like to reach over fences (where, as you know, the grass is always greener) and this often leads to escaped beasties.

Sure enough, yesterday morning Don was driving to town and noticed a cow out, but was too far away to see who it was. He turned around for home, and we all went into Maximum High-Alert Cow-Roundup mode.

We weren't sure how many cows were on the wrong side of the fence, so the first thing I did was open the gate to our pasture and give our universal cattle call, named after our very first cow: "Bossy bossy bossy bossy BOSSY!!"

In moments, the herd came thundering. A good sign -- it meant not too many had escaped over the fence. 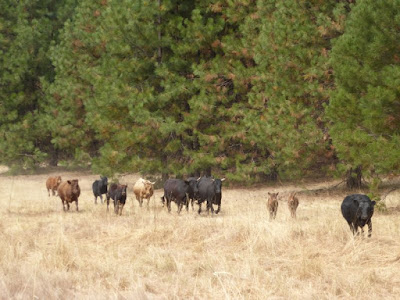 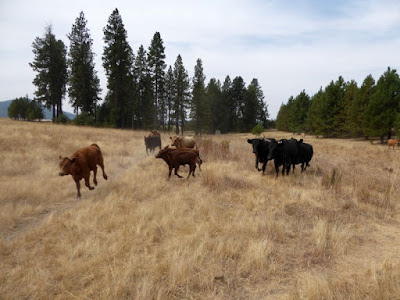 We counted as they poured through the gate: fourteen. This meant only one was where it shouldn't be. 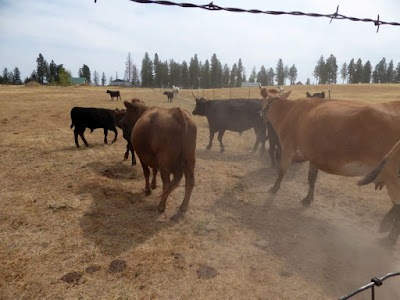 So who was our stray? Ah, Lucy. No surprise there. 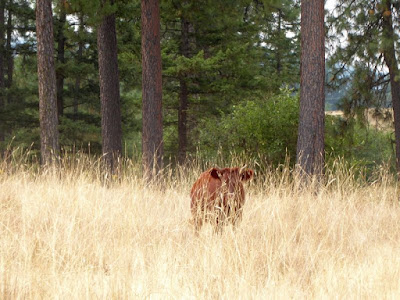 This little girl is a doll and one of my favorite heifers, but there's no question she's an escape artist. Thankfully "escapism" works both ways. She wasn't where she was supposed to be earlier, but when I gave the cattle call she "escaped" back inside the fence and followed the herd. Phew. (Next step: walk the fence line again to try and figure out where she got through.)

At any rate, she came docilely through the gate and joined everyone else. 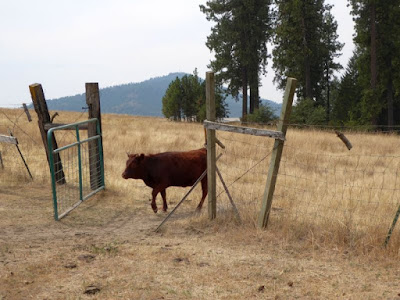 However we couldn't keep the cows in the pasture -- there was nothing for them to eat, and we're also embarking on yet another heat wave (the pasture has no shade).

The obvious solution was to put the animals in the woods for a few days. Younger Daughter and I kept them corralled for a few minutes while Don went around and opened some gates and closed others. 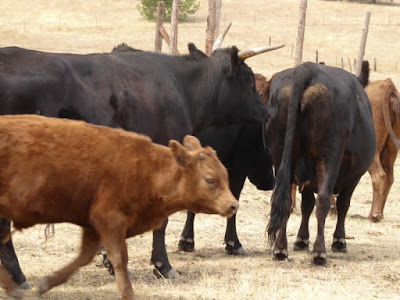 They milled about restlessly, knowing what was up. 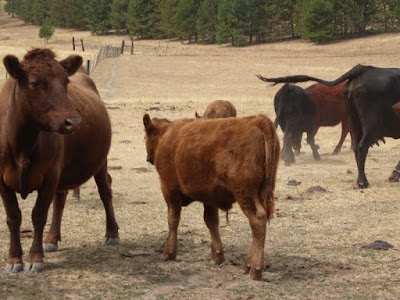 All except Matilda, who stood aside patiently. 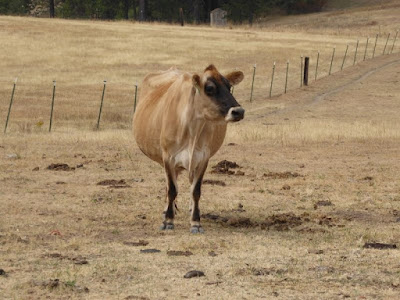 My favorite cow is looking round as a tub, so let's hope she has a successful pregnancy. She's older and hasn't conceived in the last two years, but it looks like the breeding "took" this year. She's due in September, and I fully anticipate having to bottle-feed the baby at first, just as we did when Amy was born. 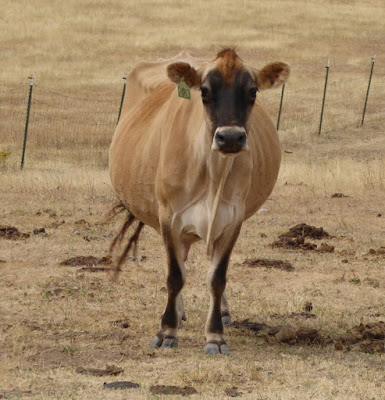 At last we were ready to spring the animals. I opened the gate and they poured through. Yeehaa! 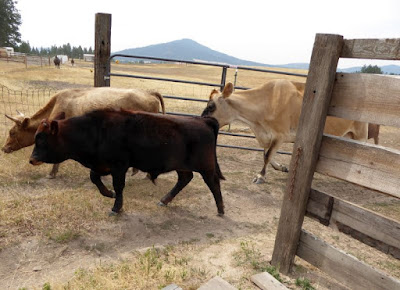 They knew just where to go, and within two minutes, tops, they were in the woods eating what grass they could find. 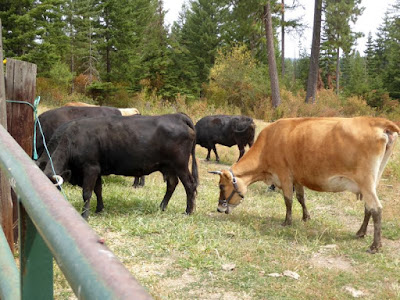 This is Curly and Dina. They've become great friends and often hang around together. 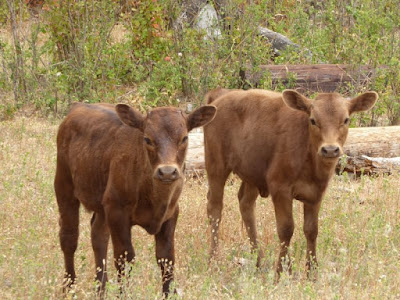 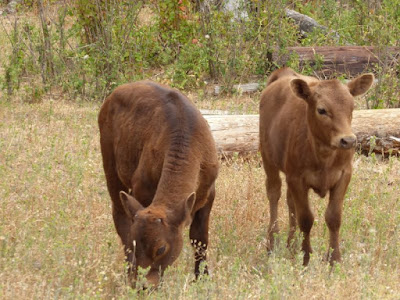 The only complication with this new arrangement -- having the livestock in the woods -- was the bull. With all the ladies suddenly and enticingly outside the fence, we knew he stood an excellent chance of escaping (particularly as he was in the feedlot, not the much-stronger bull pen, where Don is building an addition to his shed).

And, to top things off, both Jet and Raven were in heat. Both ladies took the opportunity to stand by the feedlot fence and wave their bottoms seductively at Samson.

This was too much for our bully-boy, and within an hour he had forced his way through the cattle panel closing off the feedlot and was happily cavorting with the babes. 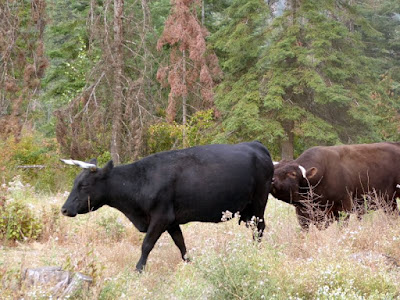 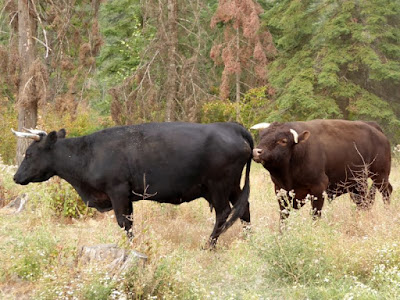 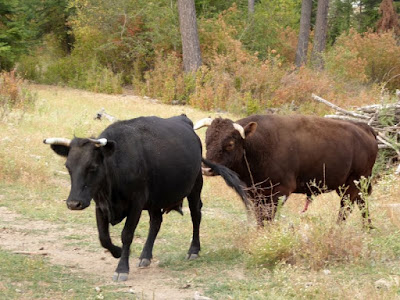 We weren't overly concerned. This is the season we like to breed anyway -- it means calves will be born in warmer weather next year, as opposed to the middle of winter -- so we just opened up the feedlot gate and let everyone mingle. There isn't a single cow or heifer we wouldn't mind Samson breeding, including little Lucy (she's small, but she's just barely old enough). This summer's heifer calves are far too young and haven't yet come into heat, so they won't be a temptation.

We'll let the bull cavort free for a couple of days before closing him back into the feedlot with a couple of animals (probably Lucy and her mom Sparky).

Little Ninja, though a steer, found Raven (in heat) irresistible. She didn't appreciate the attention from the young whippersnapper. 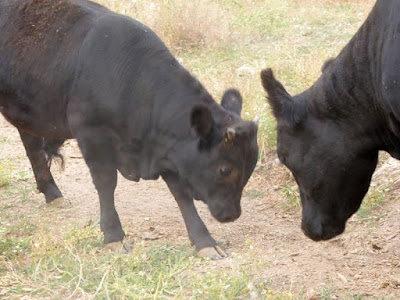 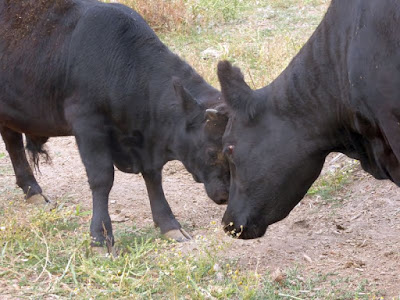 They went head-to-head for awhile, kicking up clouds of dust, until Raven convinced Ninja to leave her alone. 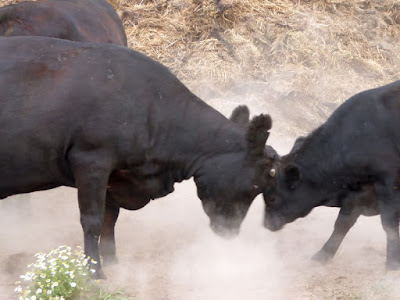 Victor immediately declared himself King of the Mountain of Compost. All hail the king. 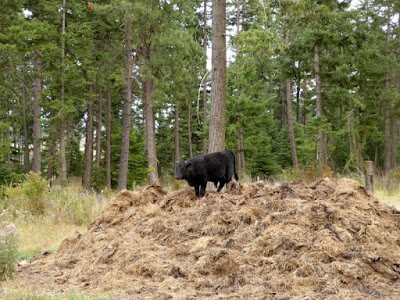 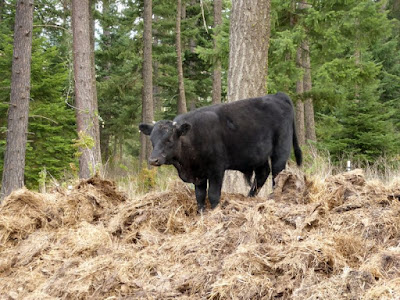 Young cows are like goats -- they just can't resist a high spot. 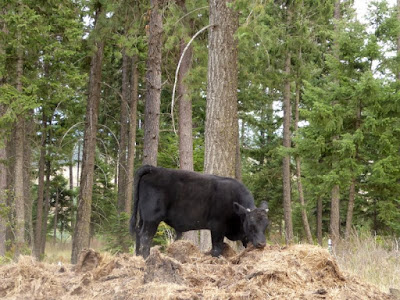 There's not a lot of grazing in the woods, since we've had no rain this summer. We're going to have to accept the fact that we'll be feeding the livestock weeks earlier than we normally would. Such is life. It's a good thing we got 30 tons of hay in.

But meanwhile, all is peaceful.
Posted by Patrice Lewis at 7:50 AM