Last June when I was getting much of the garden planted, I was using some old rotten hay for mulch when I came across two volunteer seedlings of mysterious origin. 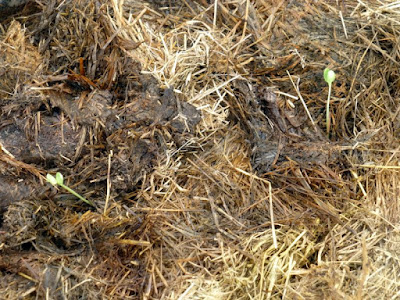 I didn't have the heart to uproot these brave little plants, so I transplanted them into a tire to see what they would grow into.

When I gently removed the seedlings from the rotting hay bale to transplant, I noticed a whole bunch of pumpkin seeds around them, so I confidently expected the seedlings were pumpkins. Logical conclusion, right?

Wrong. Or maybe wrong. The plants grew and thrived, but they didn't sprawl like pumpkins or produce the enormous leaves like pumpkins do. Yet they had pumpkin-like flowers. Weird. 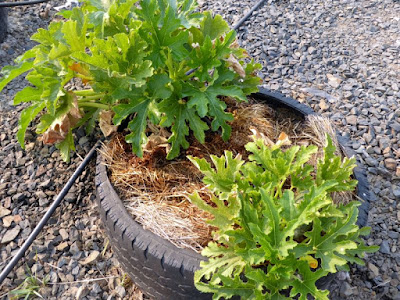 They're also not producing great numbers of fruits. So far this is the only one that's growing. It's elongated and looks rather like a zucchini, doesn't it? 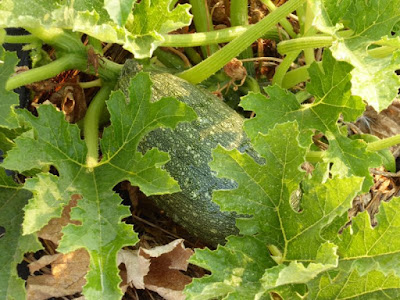 But zucchini grows uber-fast, and this fruit has been slow and steady. Also, zucchinis produce with comical abundance, whereas this is, so far, the only fruit between the two plants. Plus the seeds around the seedlings back in June were decidedly NOT zucchini seeds. So what could these plants be? 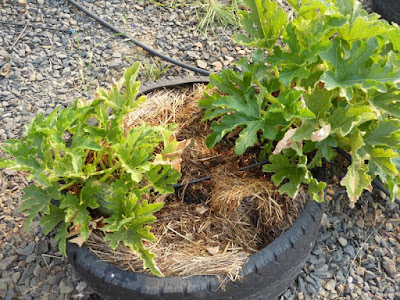 I was clueless until Younger Daughter wandered out to the garden yesterday evening just as I was photographing these plants. "They're oilseed pumpkins," she said casually.

Head clunk. Of course. I had grown some experimental oilseed pumpkins a couple years ago but never did anything with them. In fact, I vaguely remember one or two rotting in the barn on top a hay bale, so this made sense. Oilseed pumpkins don't turn fully orange like regular pumpkins, they still have a lot of green on them even when mature.

Yet even my oilseed pumpkins from two years ago sprawled more than these plants are doing; and produced more fruit; and produced rounded fruit, not the elongated thing growing now. So while Younger Daughter is quite likely correct, I'm still puzzled over the mysterious aspects of the plants.

But time will tell. I sincerely hope they ARE oilseed pumpkins, as it would be nice to have a fresh stash of seeds.
Posted by Patrice Lewis at 7:08 AM