A calf for Raven

I've been watching Raven carefully for her impending birth. Yesterday morning she tried to make a dash for it -- jumping over the fence into the woods -- which isn't unusual for a cow who really wants to be alone to birth her baby. So we closed her into the barn, to her great annoyance.

This morning when I went out to feed, Raven was restless. She wandered all over the barn -- including getting in the way as I was pitchforking hay into the feed bins -- kept stamping her back feet, and was lashing her tail. All classic signs of very early labor. 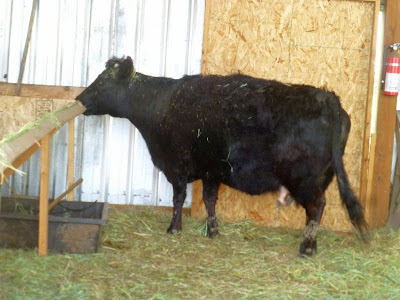 I checked on her every fifteen or twenty minutes after that. Sure enough, around 10 am, she was in active labor, straining with an arched back. 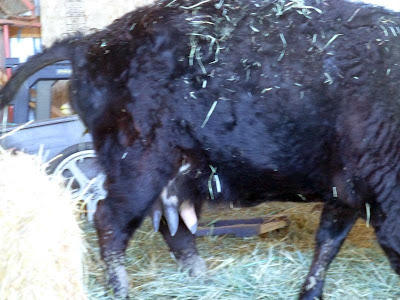 She frequently laid down and rested for a few moments between contractions. 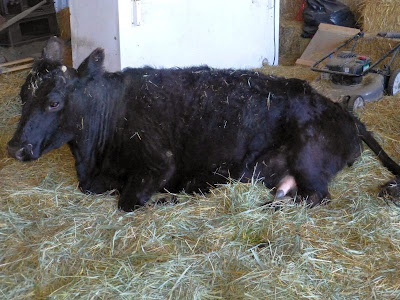 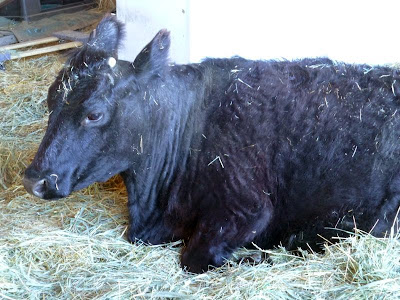 As strong contractions hit, she would heave over on her side, groaning and straining. 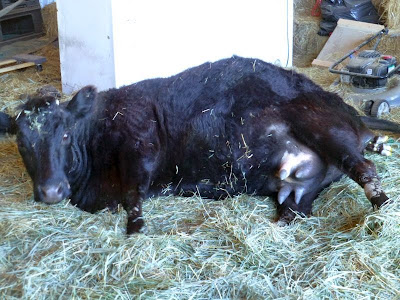 You can see the little front hooves making an appearance. They came and went a few times. 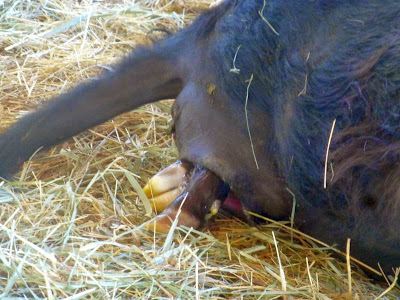 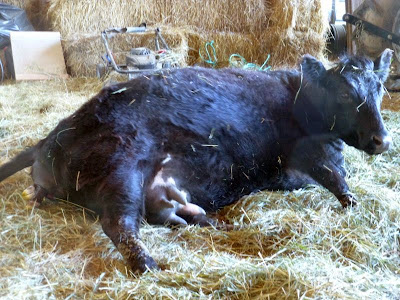 Finally the tip of the nose and mouth was visible. 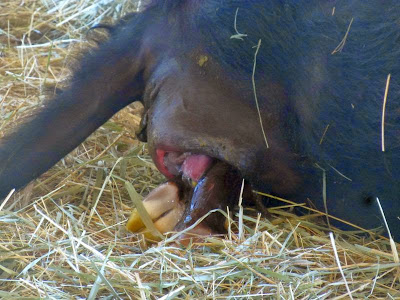 With a mighty heave, Raven pushed out the head and forequarters. 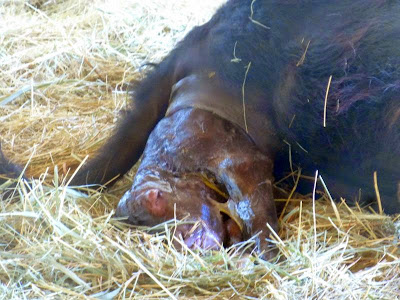 Even while still half-born, the little calf was sneezing fluids from its nose and even shaking its head. 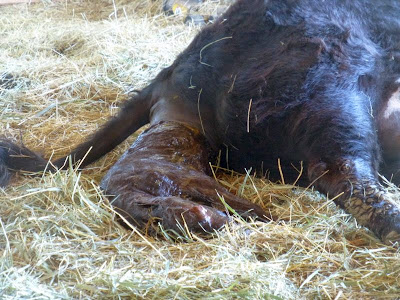 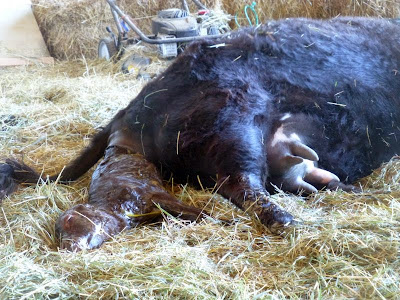 One last solid push, and the calf was out. 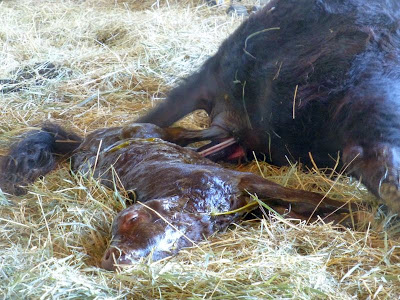 Within seconds, Raven was on her feet and licking. 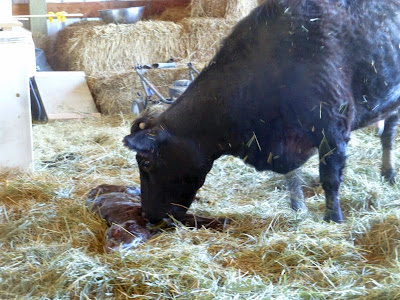 I caught a glimpse of the genitals -- another boy! Heavens, that makes four little bull calves so far this spring. 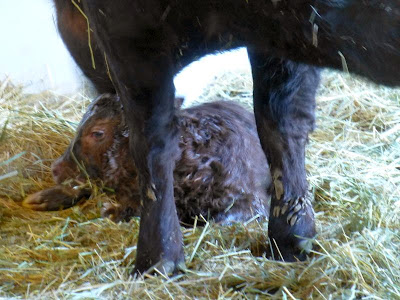 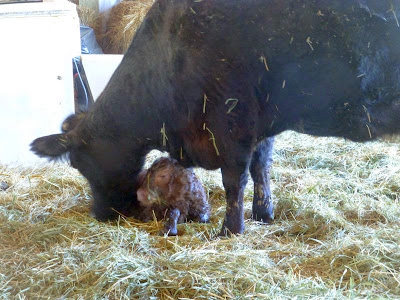 He's a strong little guy, and started struggling to his feet within minutes. (Sorry for the blurry photos, it was kind of dim in the barn.) 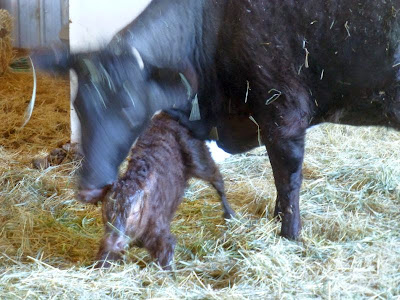 The calf is chestnut-brown. For no particular reason I named him Curly. 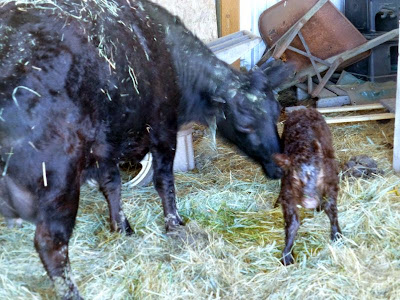 It didn't take Curly long to figure out which end of mama was which, although of course he got a few false starts. 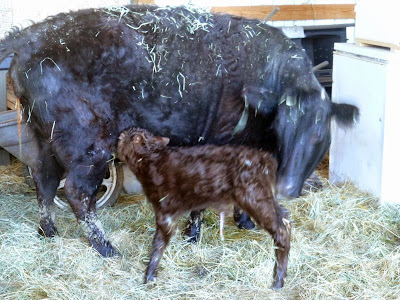 Raven is an experienced mama, calm and attentive. 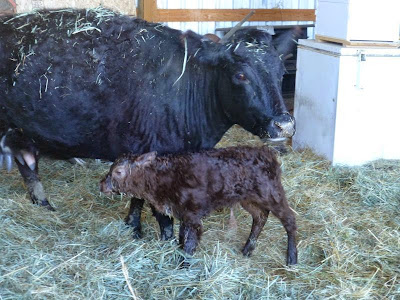 Other critters came and went, peeking at the excitement through the feedbox slats and mooing in sympathy. 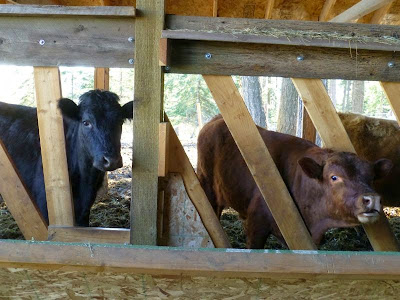 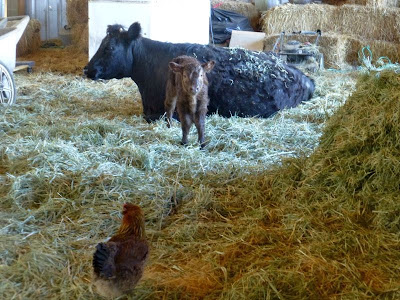 He's a strong nurser, this boy! 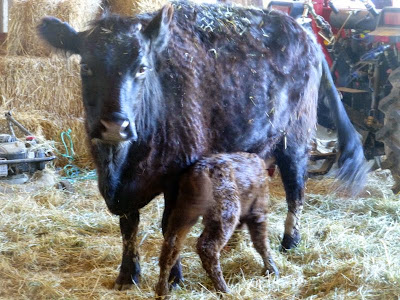 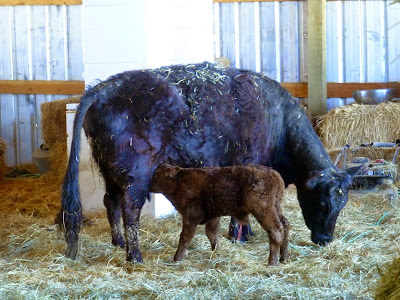 One thing's for certain -- after the harsh quasi-blizzard we had two days ago, today couldn't have been more glorious -- sunny and warm. Good birthing weather!

By evening everything was quiet and calm once again. 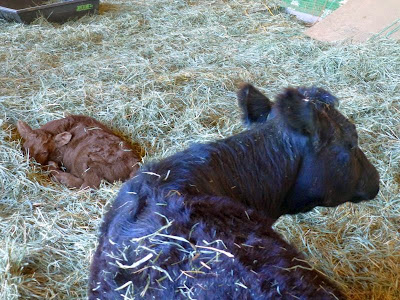 A quartet of little boys so far. Get ready for rowdiness! 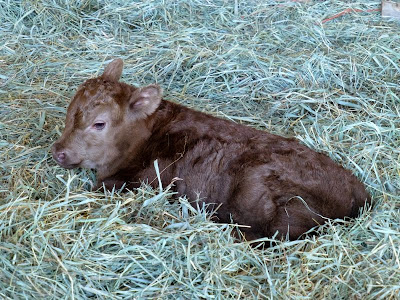 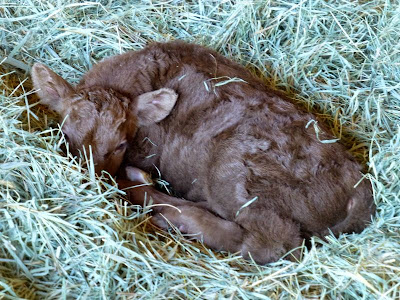 Posted by Patrice Lewis at 5:53 PM