Last week, after Don completed the fence around the pond, it was time to put the cows down in the pasture. Besides being the right time of year, part of the decision was because we need to reserve our remaining hay for the bull and cow remaining in the bull pen.

The animals milled around in the feed lot. They knew something was up. 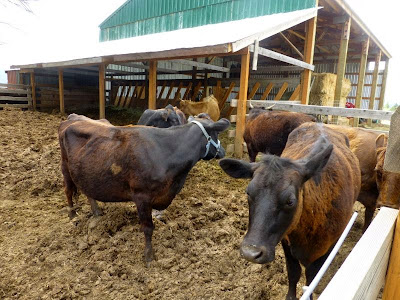 When we were ready to open gates, everyone made it down to the pasture except three of the babies (Curly, Ninja, and Lucy) who weren't sure where to go. 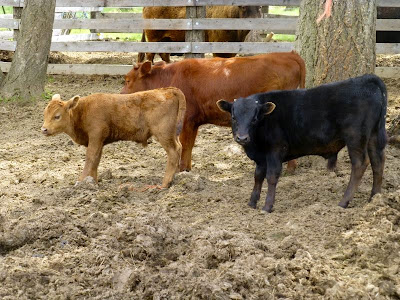 When it came time to direct themselves toward the pasture gate, instead they popped through the neighbor's fence. Ladies and gentlemen, I'd like to introduce you to the world's most useless fence -- for cows. Our neighbor (who has horses) installed this several years ago in lieu of some ratty-looking field fence. These strands are elastic and are supposed to be electrified, and when the electricity is on, it works splendidly to keep horses where they're supposed to go. 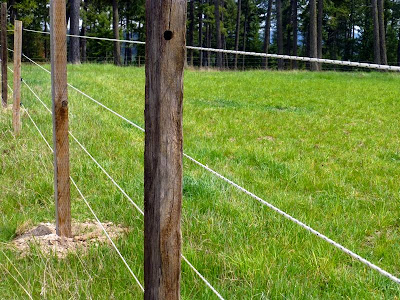 But let me tell you, it does squat to keep cattle in -- particularly calves. Even when the power is on and the strands are electrified, they just pop through quick enough that it's only a minor shock. We've spent years dealing with cattle popping through these durn strands, after which we all have to round them up off our neighbor's property back onto our side.

So a couple weeks ago, Don and I drilled holes and inserted posts to install a supplemental fence on our side, designed to keep cattle in. The posts were in place but not the fencing material, so when we tried to move the calves, they just popped through the elasticized strands onto the neighbor's land and led us on a merry chase. Grrrr.

So we managed to get the calves back in the feed lot, then we stopped and stretched field fencing (hard to see in the below photo, but it's there). 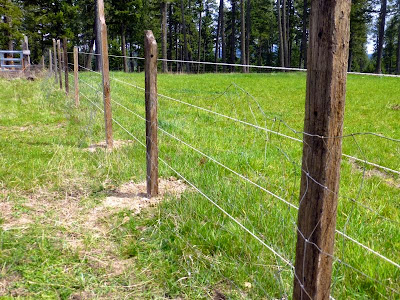 Then we released the calves and once more herded them around to where the pasture gate was. What followed was absolutely hilarious and had us rolling on the ground laughing. The calves, thinking things were just the same as before, headed straight for the neighbor's fence... and literally bounced off the newly-installed field fencing. They tried several times -- "Hey, this worked a few minutes ago!" -- and got nowhere. So they gave up and went where we wanted them to go, namely into the pasture. Man, we should have done this years ago.

Soon everyone was happily grazing. 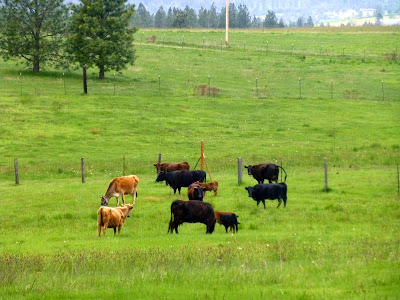 By the way, remember our herd matron Jet whose surprise calf provided her with a stay of execution (from the freezer)? Of the many excellent names you all suggested for the calf, we chose Victor (since he was born on Good Friday and he provided his mother a temporary victory over the freezer).

This was Victor's first time out of the bull pen. When he hit the field, he ran and ran and ran. (That's him on the left.) 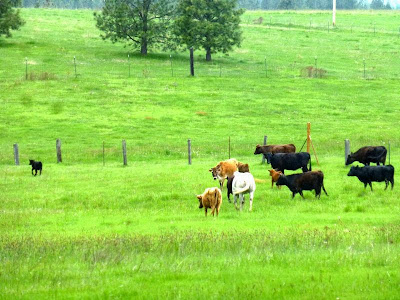 Everyone appreciates a mineral block. 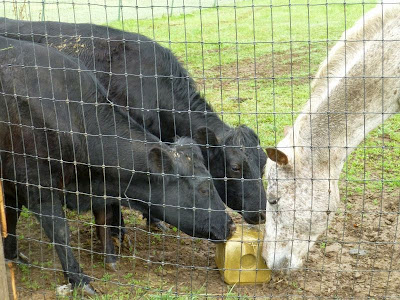 Yes, some fat and happy cows. 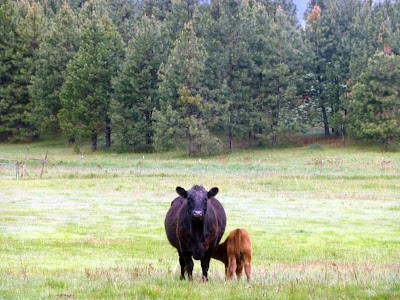