Well the anticipated bitterly-cold temperatures in the wake of the Aleutian Islands typhoon have arrived with a vengeance. We've had lows of 10F and highs of 22F. 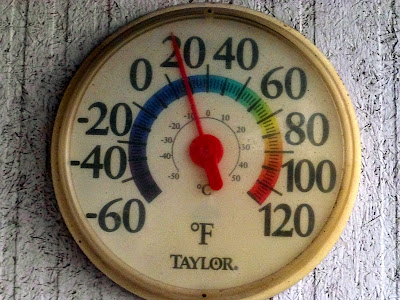 It's not that it's really that cold -- we've had colder weather in terms of absolute temperatures -- but it was (a) a sudden plunge after a stretch of relative balminess; and (b) it was accompanied by a nasty north wind that added a wind chill factor hovering around 0F.

Additionally, 99% of the time our prevailing wind direction is from the southwest. Accordingly we've built animals shelters (bull pen stall, barn awning, etc.) to provide shelter from the prevailing wind. However this was a contrary wind, and it chilled the poor animals badly.

On Tuesday morning (about 12F and windy) I went out to feed everyone. Polly, who was in the bull pen with her calf and a few other critters, was reluctant to come out of the shed. When she finally did, she had an arched back and looked sunken, and she was trembling. But she was eating, at least. I told Don it was time to get her and her calf out of the bull pen, so we gathered the troops and scooted her and her baby out. She immediately began feeding from the feed boxes.

A couple of hours passed by and I was bundled up and working outside since snow is expected later in the week. All of a sudden I heard a terrific commotion of stampeding livestock crashing through the woods, and from inside the bull pen our bull was bellowing. I dashed into the house and grabbed the cell phone and ran down to the woods.

To my horror I saw Polly, flat on the ground. Flat. She wasn't dead but she looked like she was dying. The other animals were stampeding around her. I grabbed a stick and straddled Polly's head and started aggressively whacking noses, while punching in the house phone number. When Don answered, I screamed into the phone, "Polly's down! She's flat on her side in the woods!" I almost added that he should bring the shotgun, because I honestly didn't think she would make it.

Poor Don hadn't heard the commotion in the woods (he was inside the house when it happened), so to suddenly have a hysterical wife on the phone was alarming, to say the least. He was there within two minutes and grabbed a stick as well, to ward off the other cows who seemed determined (for some reason) to trample Polly (I think out of excitement, not aggression). We shouted and whacked noses and scattered the herd. Polly managed to rise to a lying position. Then to my surprise she was able to get slowly to her feet, albeit shakily.

I didn't have a lead rope, but I took the ring on Polly's halter and slowly led her up the slope toward the barn. I was astounded and grateful she was walking, and we made it without incident into the corral, where I shut her into the barn.

From somewhere, Don produced a horse blanket (don't know where he got it, a yard sale or something, but God bless him for it) and we draped it over Polly's still-trembling body. It was far too big for her, of course, but we buckled and tied it as best we could. 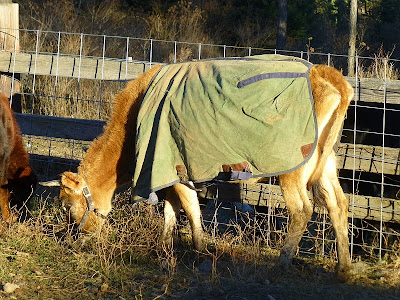 The fact that she didn't fight it meant it clearly was doing her some good. It cut the wind, at any rate.

We managed to scoot Chuck, her calf, in with her as well, and the animals curled up in the barn for the remainder of the day. Matilda and her yearling calf Amy, who usually stay in the barn, shared the space as well. 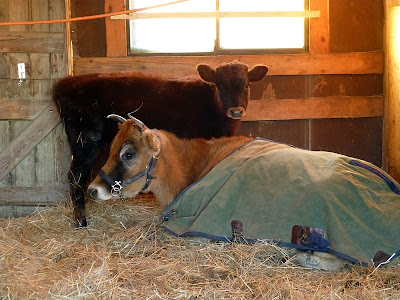 Don stapled a tarp against an open side to the barn in order to cut the wind. 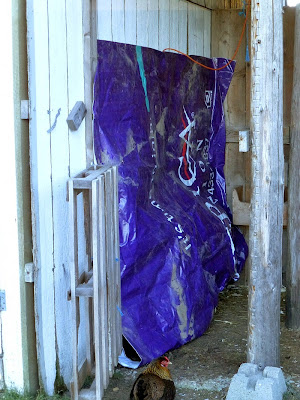 Polly's been eating well and chewing her cud, both critical indicators of a cow's health, so I think she'll make it. I don't know if she was suffering from hypothermia or what, but it frightened me to death to see one of my favorite animals in such desperate condition.

(As an aside, a neighbor with extensive livestock experience came over to get his horses from our pasture, where they'd spent the fall. When I told him about Polly, he said "Let me know if you need help with anything." His meaning was clear. If Polly needed to be dispatched out of her misery, he was volunteering to do the job. I was more grateful than I could say.)

We're going to keep Polly and Matilda and their calves in the corral until the cold snap breaks. Jerseys aren't as cold-hardy as Dexters, so a little extra pampering may help. 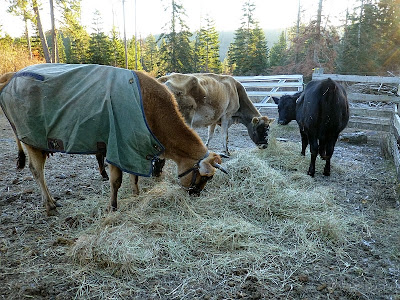 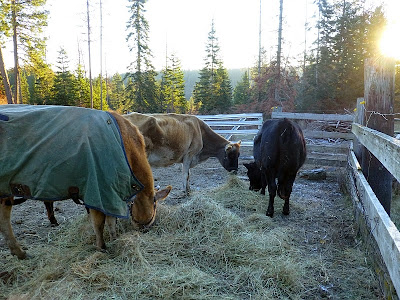 We haven't neglected the other animals either. We've made sure the feed boxes are full (digestion is a significant factor in keeping livestock warm). 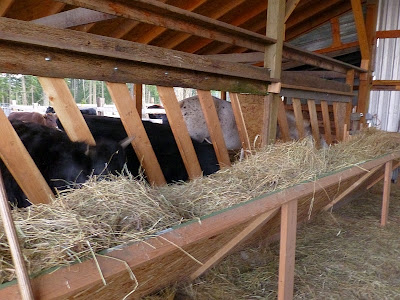 I spread a bale of older (non-edible) hay in the bull pen shed for extra warmth (the flash picked up the debris in the air in this photo). 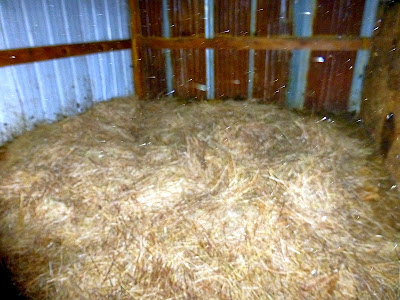 The chickens have straw, heat lamps, and insulation in their coop. 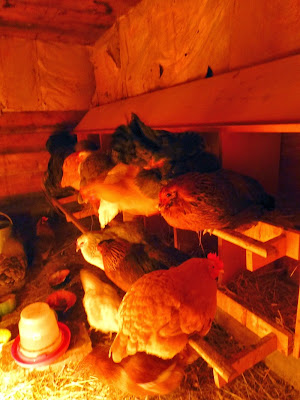 We've had clear skies despite (well actually, because of) the cold. Here's some alpine glow. 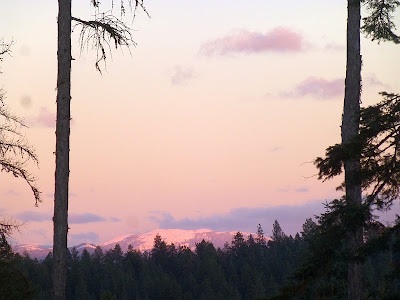 I just hope we get through the rest of winter without any more heart-stopping excitement. 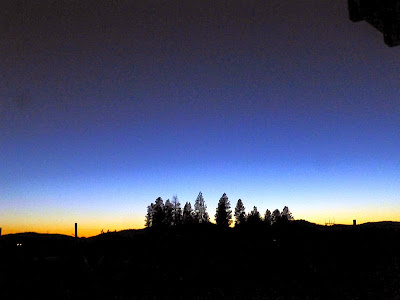 Posted by Patrice Lewis at 8:56 AM