It's far too early to plant anything directly in the garden -- around here, June 1 is about the earliest we can expect to get things in the ground (and sometimes even that's not a guarantee) -- so a lot of stuff has to be started indoors.

We have a tiny greenhouse (a retrofitted shed) that I've tried using over the years to get seedlings started, but it has two problems: heat retention, and rodents. 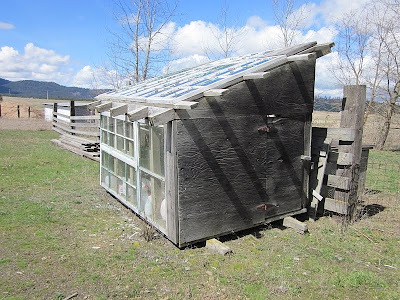 Let's face it, unless it's heated, a greenhouse won't retain heat in cold temperatures. If nights drop below freezing, so does the greenhouse. So that's one problem.

The second problem -- rodents (specifically, mice and chipmunks) -- we thought we had licked two years ago when we fitted the entire inside with hardware cloth over every crack and crevice. 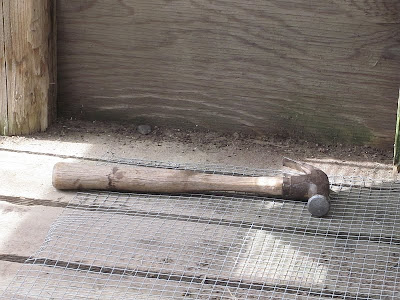 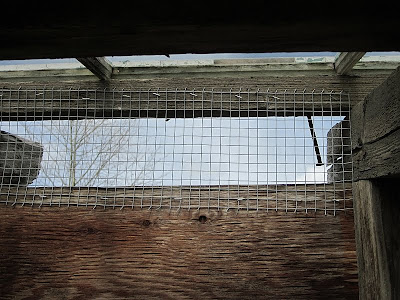 However I learned the hard way it didn't work. Last year I started many seedlings in the greenhouse, only to come out the next morning and find the seeds had been dug up and eaten. Grrrr. 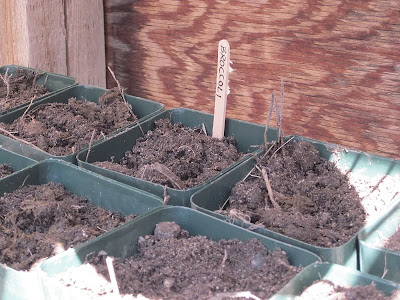 So a greenhouse was out. We decided the only viable option was to start seedlings in the house. Next problem: where to put them. Flats of seedlings, as you know, take up a lot of room, and we can't just put them any old place -- they need sunshine.

I'm not talking about just starting a tomato plant or two. I want a proper garden, something that can feed our family. The whole purpose of transitioning to a tire garden is to be in a position to produce nearly all our fruits and vegetables.

There's a legitimate financial justification in this interest. Take a gander at this jaw-dropping graph from ZeroHedge showing how food prices have jumped a staggering 19% in 2014. Yikes. 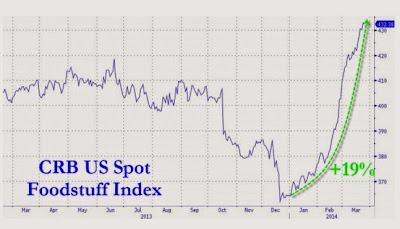 With that in mind, I wanted to plant hundreds of seedlings... which then begs the question, where to put them? After a bit of thought and research, we made two purchases that we feel falls under the "tangible investments" category.

The first item was a lot of 1000 two-inch seedling pots off eBay. I had a number of three- and four-inch pots I've collected over the years, but those pots were too big for planting individual onions or even corn. 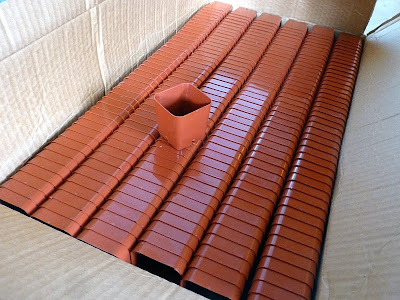 The second item was an industrial-strength wire shelving unit on castor wheels. This, we felt, would offer the maximum amount of storage with a minimum amount of space. We found the best price on eBay. Six shelves, 48 inches wide, 18 inches deep, 72 inches high, with wheels. 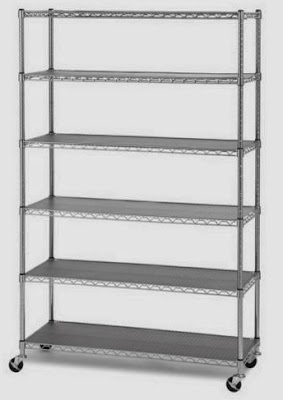 Owing to a shipping mishap, the delivery of this shelving unit was delayed by a couple of weeks, but at last the UPS truck drove up. 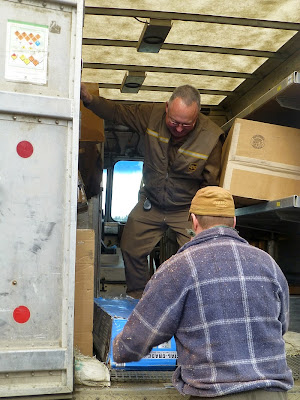 A couple of other smaller purchases included two dozen inexpensive gardening trays (10x20 inches) for about $1.79 each, and a couple large bags of potting soil from Costco (4 cubic feet, $10).

Knowing how anxious I was to get the seedlings started, Don took time out from work and we assembled the unit right away. It went together very easily and required no tools (except a rubber mallet to tap things into place). 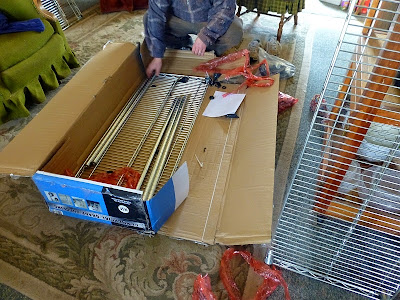 While sometimes the quality of items purchased off eBay is questionable, this unit exceeded all our expectations. It's solid as a rock and very sturdy. 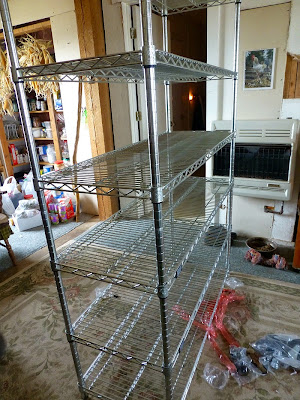 Don had some concerns that the wheels would be cheap and flimsy, but they're not. 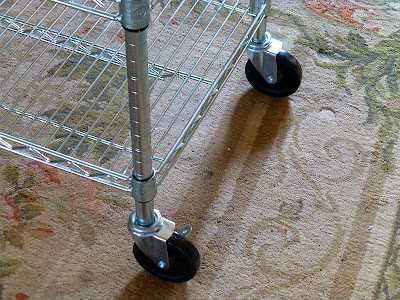 The dimensions of the shelving unit were important since they fit four flats per shelf (the flats hang over the edges one inch on either side, not a big deal). This means I can fit 24 flats on this shelving unit. To appreciate how useful this is, imagine the logistics of trying to find room for 24 flats all over the house, taking up every available window space. 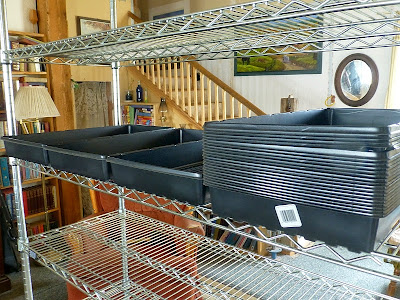 Then I pulled out my seeds and got to work. 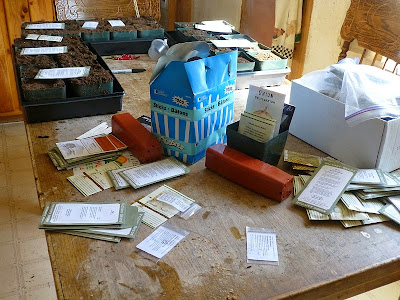 The two-inch pots were purchased specifically so I could fit them 50 to a tray... 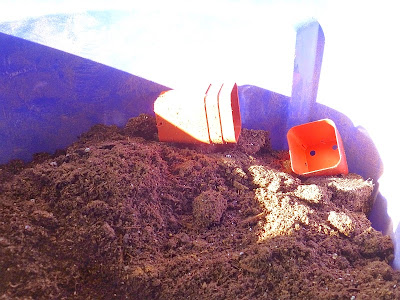 ...which they did very nicely. 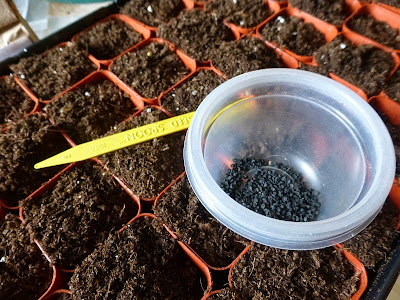 By the way, a few years ago I bought these little gizmos called Seed Spoons for some ridiculously low price ($1 each or something). 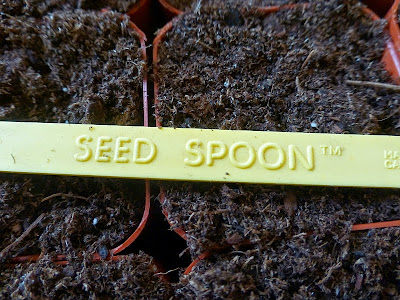 They're simply plastic sticks with a seed scoop at either end (I have two spoons, thus four scoops). The scoops are in various sizes. 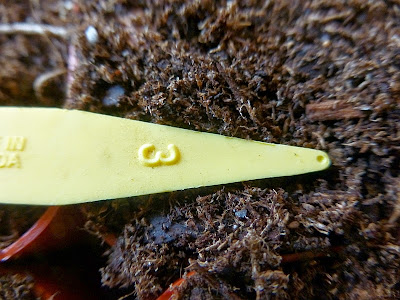 When you're dealing with very tiny seeds, it's so much more efficient to plant one seed using a seed spoon than to waste seed by planting too many and "thinning" them later on. 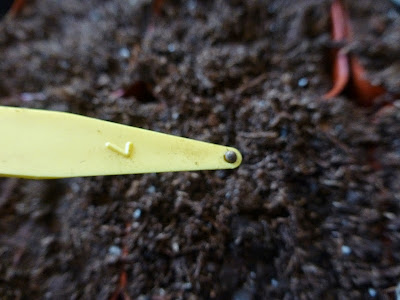 All day long I potted seeds. At the end of the day I had 484 seeds planted as follows: 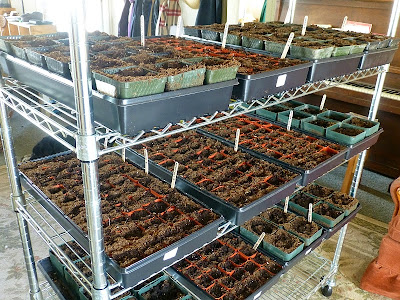 And remarkably, there's still room on the shelving unit for 500 corn plants! (Planted 50 to a tray.) I won't plant the corn until about May 1. 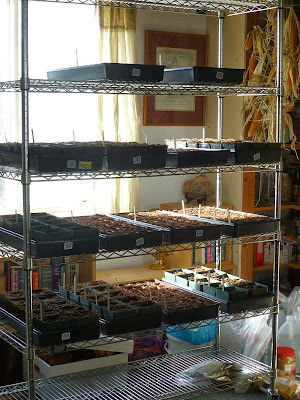 The advantage of having the shelving unit on wheels is it allows us to move it from window to window to take advantage of both morning and evening sun. We can also move it outside when it comes time to harden off the plants.

Of course this doesn't count the veggies I'll plant directly outside when the weather permits. These include:

So the old song will hopefully come true this spring. 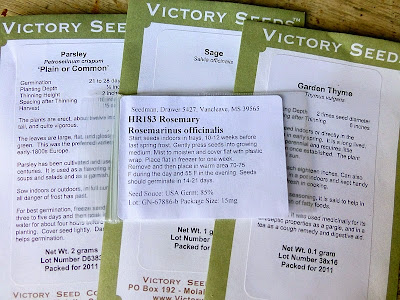 Posted by Patrice Lewis at 6:35 AM