Tomorrow is butchering day. We have a steer, Chester, who is actually only a half-steer. That's my fault -- I did a lousy job with the banding -- and as a result this randy fellow has been happily coasting around with our young heifers, who aren't old enough to breed yet. So he's going in the freezer, even though he's pretty young.

This isn't a difficult decision. Steers always have a date with the freezer. It's just a matter of when.

However something happened this week that caused Don and I to add another animal to the freezer list, and that's one of our herd matriarchs, Ruby. 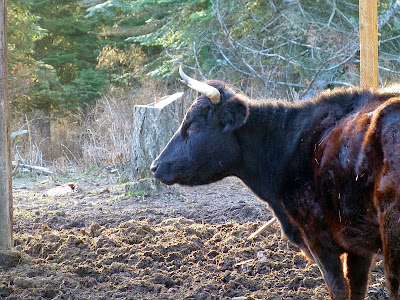 We got Ruby and Jet shortly after we arrived in Idaho, when they were about nine months old. Right now these ladies are about eleven. 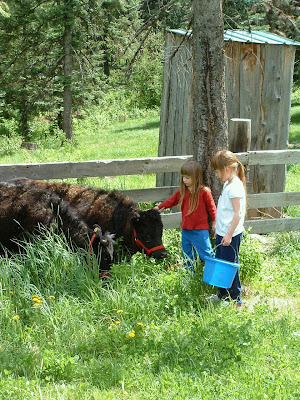 Both have horns, and both have very different dispositions. From the start Jet has been very sweet and mostly gentle. From the start, Ruby has been an absolute pisser. She's very much the dominant animal on our farm.

Nonetheless I milked her and Jet for several years, and she has faithfully birthed a healthy calf every time she's bred. She's an excellent mother and produces beautiful calves, which is why we've put up with her for this long. 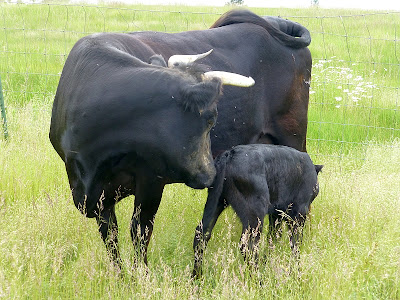 But there's no question her dominance affects the dynamics in the feedlot. I feed over two fences (our goal is eventually to build feed boxes), and Ruby usually sweeps the other animals out of her way. Often she ends up with the whole awning almost by herself... 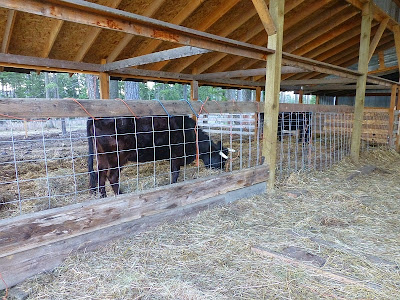 ...while the rest of the herd makes do with the feed by the other fence. 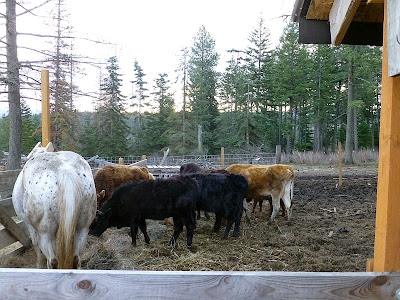 This demonstrates how much our animals are held hostage to Ruby's dominance.

Then something happened this week which made me mad enough to spit nails.

I was feeding the cattle in the morning in the feedlot. Parts are still pretty muddy from the winter snowmelt, so the cows have to pick their way to dry ground.

As usual Ruby came along and swept everyone from her path under the awning as she searched for the choicest hay. One of the cows she swept out of her path was Polly, our purebred Jersey. Polly lunged away from Ruby, tripped, and got momentarily mired in the mud and couldn't get up.

Instantly Ruby was on her, attacking Polly as she lay helpless on the ground.

I leaped into the feedlot and started whaling on Ruby with the back side of the pitchfork. Startled, Ruby broke off her attack and this gave Polly the chance to start heaving herself to her feet. But then Ruby went after Polly again, so I continued whaling on Ruby until Polly had a chance to get away.

To say I was furious is an understatement. Poor Polly has a scarred backside from putting up with Ruby's temper. The last thing she needs is to be gored by a mean cow. 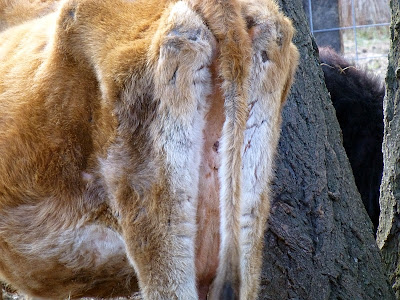 So after discussing it with Don, we called the mobile butchers and asked them to add a second animal to dispatch when they come to our farm. Enough is enough.

Yet I am not at peace with this decision. Butchering Ruby will leave little Alice orphaned, always a sad situation. Alice was born in June and is now ten months old. She's plenty old enough to wean, but it will be hard on her at first. 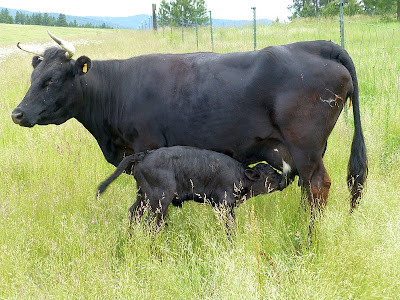 Yet butchering the steer, Chester, will deprive his mother Raven of her calf... and I'm not having bad dreams about this decision. We need to do what's in the best interest of our farm. 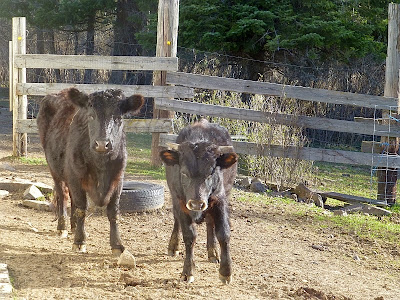 I know butchering Ruby is the best thing in the long run and will make life much more peaceful for the rest of the critters, but I confess I've been having nightmares (literally) about it. I've been walking around with a knot of dread in my stomach for the last couple of days. This is one of the few butcherings I won't attend. I plan to head into town tomorrow morning and hang out someplace until the deed is done.

It's hard to say goodbye to an animal we've had for ten years, even if she's a bad-tempered twit.
Posted by Patrice Lewis at 9:33 AM