Thank you for all your support for our difficult decision to butcher one of our herd matriarchs, Ruby. The butchering went off without a hitch last Monday.

So what is life like without Ruby? As predicted, much calmer.

And I mean, seriously calmer. The big test comes each morning and afternoon when we feed under the barn awning. 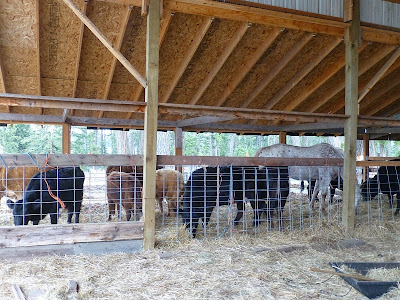 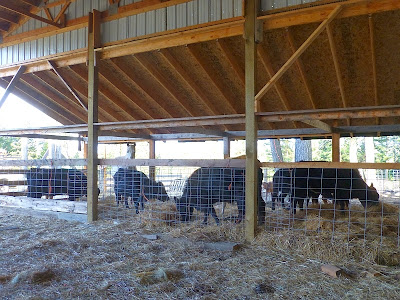 Up to this point we fed over two fences -- the barn awning, and another fence into the feed lot. The reason for this is because Ruby would literally take over either one feeding spot or the other while she ate, while much of the herd would ebb and flow to the other feeding spots in accordance to Ruby's whims. Anything to get away from those horns. With that jittery dynamic no longer a factor, everyone has been grazing more peacefully under the awning, protected from the weather as they're supposed to be. 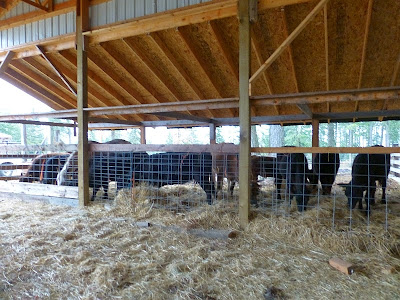 I've been keeping an eye on Alice, Ruby's calf. At ten months she's certainly old enough to be without her mother, but that doesn't mean she wants to, if you know what I mean. But because we always make sure butchering is done out of sight of the herd, Alice doesn't know her mother is dead, just gone. So far she's adjusting fine, with a minimum of fuss.

But I did catch her sneaking a drink from Matilda, along with Matilda's calf Amy. 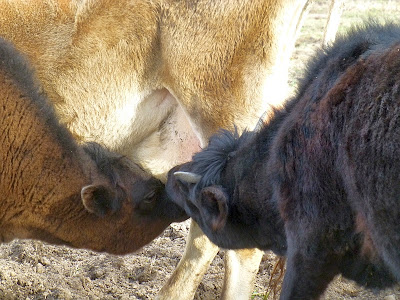 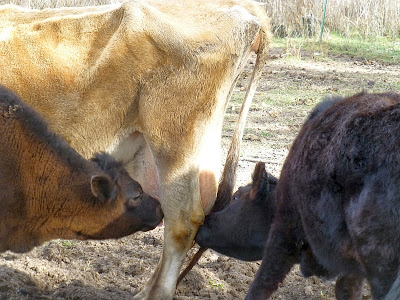 God bless Matilda, whom we affectionately call our Universal Donor. At one point three calves were trying to cop a drink, which is pretty funny since she only has two working quarters. But it's nice to know there's a little comfort food for Alice if she needs it. 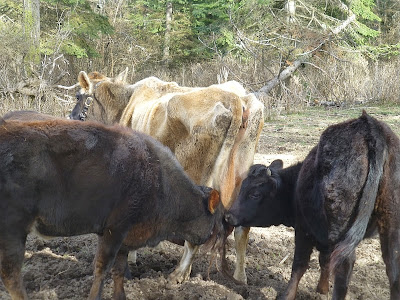 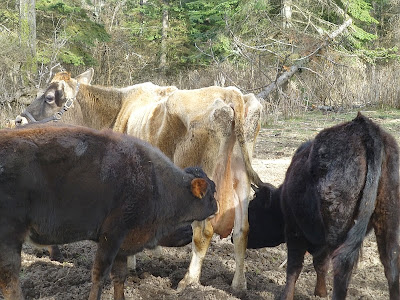 One of the reasons we were anxious to see what life would be like without Ruby is because we plan to build feed boxes this fall, under the awning. Feed boxes would reduce the amount of wasted hay, as well as keep it cleaner (out of mud, poop, and urine). But feed boxes assume you don't have a domineering horned animal going around goring everyone.

So for the moment life is peaceful once more. It's really amazing how one animal can affect the herd dynamics so strongly.

Our other herd matriarch, Jet, has been in the bull pen with Samson, our bull, for the winter. When she comes out, we'll see what happens as far as dominance goes. Jet is also fairly bossy and she has horns, but she's never had an ornery mean streak as Ruby had, and was never inclined to gore other animals. 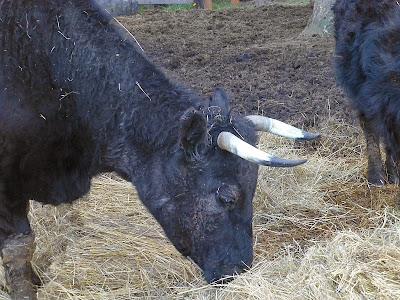 If that changes... well, we'll cross that bridge when we come to it.
Posted by Patrice Lewis at 8:01 AM