Echoes of the past?

Lately a graph has been making the rounds on Wall Street as well as the internet which depicts the similarities (or “rhyme,” some people call it) between the current Down Jones Industrial Average, and the DJIA during 1928-29. 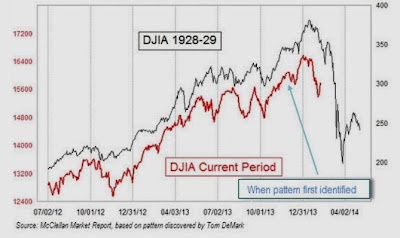 Here's the article on Market Watch. To quote: “To be sure, as McClellan acknowledged: “Every pattern analog I have ever studied breaks correlation eventually, and often at the point when I am most counting on it to continue working. So there is no guarantee that the market has to continue following through with every step of the 1929 pattern. But between now and May 2014, there is plenty of reason for caution.”

As the adage goes, “Those who do not learn from history are doomed to repeat it.”

I don’t pretend to understand the stock market, much less economics in general. But I do know there are endless precedents in history which should give us fair warning that things are not as stable and cheery as our government would have us believe. That’s why we prep.

And above all, they know that history has an annoying habit of repeating itself.

The history of humanity is one of struggle, strife, bloodshed, famine, competition for resources, and other discouragements. It’s a cycle. It’s happened again and again. But most people tend to think that anything that hasn’t happened since the time they were born hasn’t happened before, but of course that’s patently untrue.

In the last hundred years, most Americans have not had to deal with these difficulties on our soil. We’ve fought wars, but those have been overseas. We’ve competed for resources, but we’ve always won. Our innovation as a nation has meant we’ve been blessed with untold material comfort and food safety. 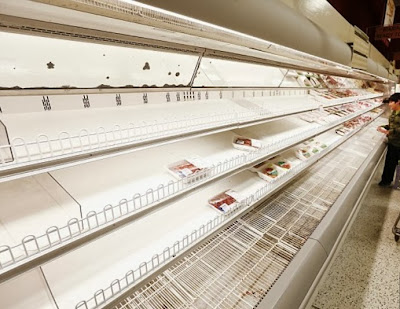 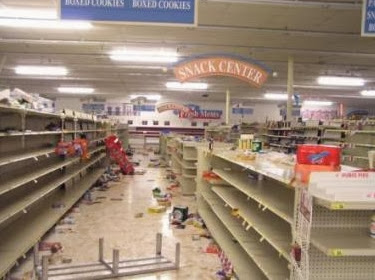 But this doesn’t mean we’ll never have to handle challenges. When we refuse to learn from history, or think history cannot repeat itself, or think we are immune to historical precedent, in our arrogance we are therefore doomed to repeat it.

People often deny that history could ever repeat itself. “This time,” they assure us, “it’s different” – without ever being able to specify what “it” is and why it would be different this time.

We like to think we live in unique times. To some extent, we do. At no other time in history has our knowledge of technology and medical skills been higher. But human nature never changes, and it’s our human flaws as well as unforeseen environmental or natural disasters that can bring even a mighty civilization to its knees.

Besides being a fascinating study, history offers a useful guide for how to handle current or future events. Being prepared to handle crises (both personally and as a nation) such as hunger, loss of resources, and other catastrophes is never a bad thing.

But rather astonishingly, some people DO look upon this thoughtful regard for history as just that – a bad thing. History has shown that governments of even the freest nations eventually turn rogue, grow cancerously large, become increasingly paranoid and suspicious, begin to steal liberties from citizens, and eventually become tyrannical, oppressive, and mistrustful of anyone who seeks to recapture individual independence and freedom.

We are currently in that state.

Our nation has come to view those who prefer to NOT depend on the government as everything from lovable crackpots to domestic terrorists. This is shortsighted in the extreme, but that’s the nature of government and its useful idiots.

That is why I urge people to study history in conjunction with preparedness. Take a look at prior civilizations and note the nature of the calamities most likely to affect us, and think what you yourself can do to mitigate the possibilities.

Naturally, preparing in no way guarantees we can avoid calamities; it simply means we try our best to minimize the impact. 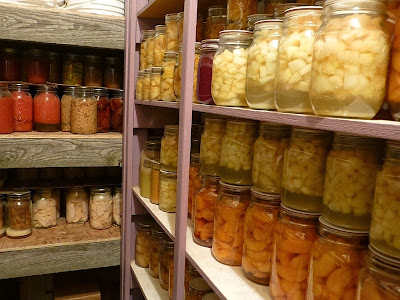 “You may still be inclined to dismiss this,” notes the Market Watch article. “But there were many more were laughing last November when this scary chart began circulating. Not as many are laughing now.”

Posted by Patrice Lewis at 3:27 PM