This time of year can be a bit nail-biting because it's the time of year to get hay in. I say "nail biting" because an ill-timed rainfall can ruin a lot of hay.

Before bringing in hay, however, we needed to prepare the barn. The most obvious problem was all the huge tractor tires that were stacked in front. 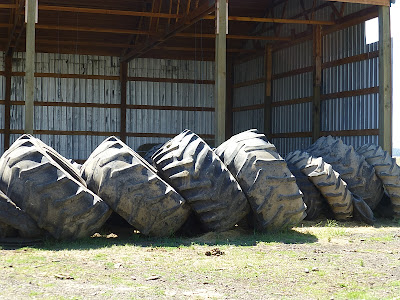 We decided to move them to the side and back of the barn. We borrowed a neighbor's tractor for the task. Don managed to snag some of the tires by their rims... 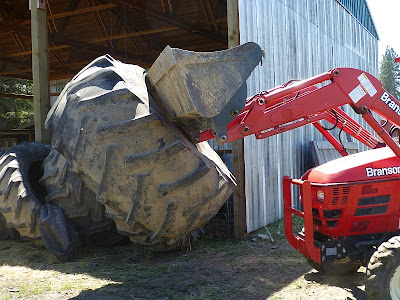 ...but for most of them we had to use a chain. At one point a very pregnant Matilda ambled over to see what all the activity was about. 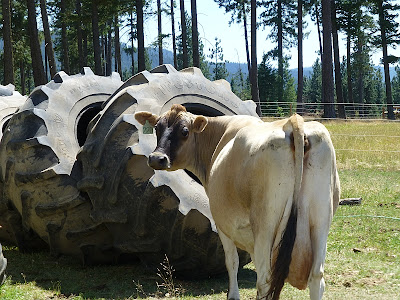 After a couple hours' work, the tires were all stacked behind... 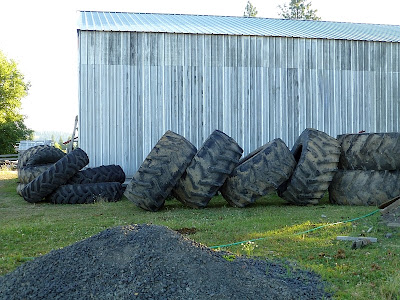 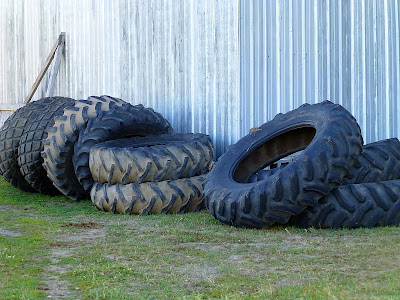 We made sure the front of the barn was blocked off by cattle panels (sometimes called hog panels) to keep the critters out of the remaining hay bales. 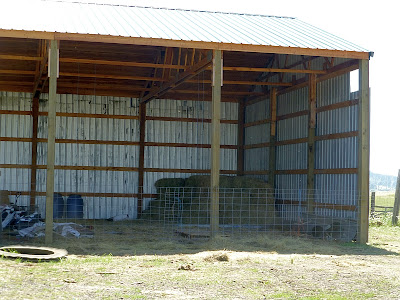 Now it was time to get hay.

Grass hay is just mown-down field grass, dried and baled. The best fields don't have too much western hawkweed (a nasty invasive species that crowds out grasses) or cheat grass (a nutritionally useless invasive grass that "cheats" by droppings its seeds earlier than other species, thus giving itself a seeding advantage) or St. John's wort (which resembles 12-gauge wire when it's dried).

The absentee owner of the 25-acre field kitty-corner across from our property allows us to mow and bale his pasture. Depending on how much rainfall we get in the spring (this year: not much), we might get anywhere from nine to fifteens tons of grass hay off this property.

This year we'll be over-wintering 18 head of cattle, which means we're going to need about thirty tons of grass hay in the barn. In addition to the grass hay from across the way, we need to find other affordable hay to supplement what we get off this property.

The trouble is, we don't own any of the equipment necessary to bale grass hay. We don't have a tractor, a swather, a rake, or a baler. This means we're at the mercy of whatever farmer we can sweet talk into baling the property for us in a timely fashion. I say "sweet talk" because all farmers are stretched VERY thin this time of year. There's a tremendous amount of work to be done in a very short window of time, and these hardworking people frequently put in 18 hour days getting it done. I say "timely fashion" because if you wait too long to cut grass hay, it turns into grass straw and has very few nutrients.

A local fellow by the name of Alan has mowed the neighbor's pasture for us for the last two years. This year he mowed it on July 17. 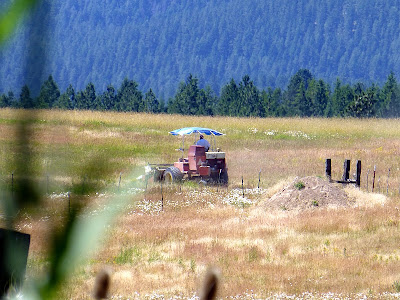 A few days later, he mowed another neighbor's land. (No, the cows aren't in with him. There's a fence between them.) 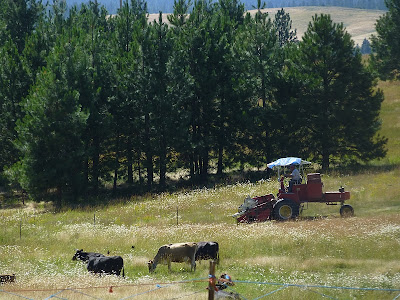 After the hay is mown, it must lie on the ground for a few days to dry. You can't bale fresh green grass or it will rot and mold, and even spontaneously combust a few months later. But when hay is drying on the ground, it's nail-biting. Will it rain? 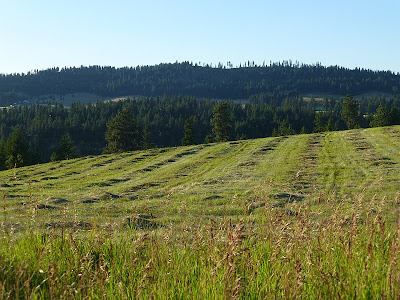 After the hay dried for a few days, Alan came through with a rake and pulled the rows of hay into windrows. All this means is he blends several shallow thin rows into one larger, wider row. This serves two purposes: it fluffs the hay and lets it dry some more, plus it allows Alan to bale the hay more efficiently. 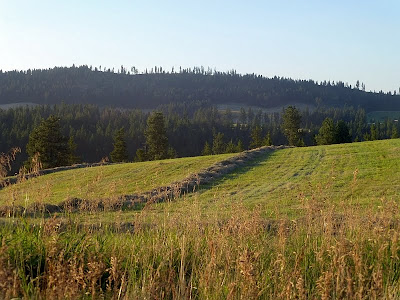 When Younger Daughter and I returned from our week-long trip to Portland, we saw that Alan had baled the grass hay during our absence. 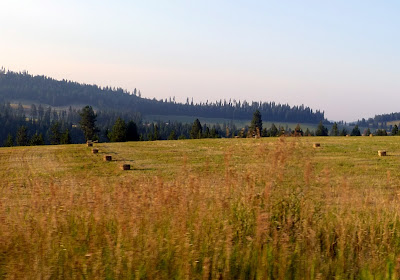 He also had the first load of bales stacked in the loader to deliver to our place. 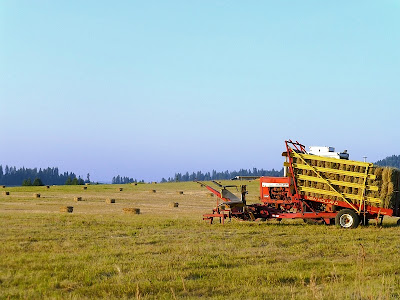 Groan. This meant that, no matter how tired Younger Daughter and I were from the trip, the next day was going to be a Hay Day.

Actually, we had no choice. We got home on Monday, and Thursday and Friday promised to be rainy. Rain plus hay equals rot. We can't feed our cows rot over the winter.

We spent some time cleaning up the barn to make room for incoming bales. This meant piling all the haybale twine that gets tossed around all winter long into one spot, as well as pulling aside any other random things on the barn floor (such as a billboard tarp). 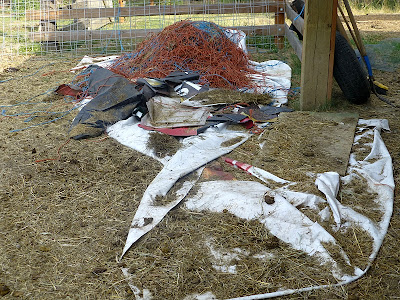 In the corner are the bales left over from last year (we had a surplus for once!). We've been feeding these to the bull, since of course he's penned up and can't graze. After some thought, we decided to leave these bales where they are, stack the new hay off to the side of them, and continue using the older bales up first. 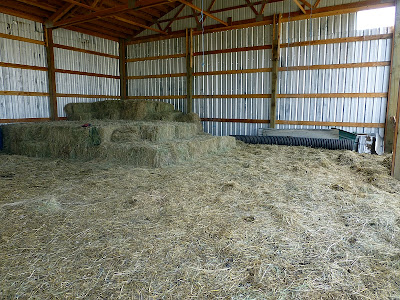 We also hired two of Enola Gay's kids, Miss Serenity and Master Hand Grenade (on the right), to help stack bales. These kids are hard workers and strong. (Sorry for the blurry photo.) 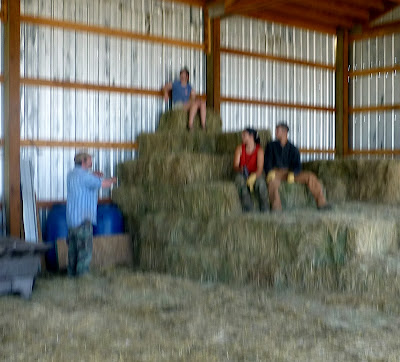 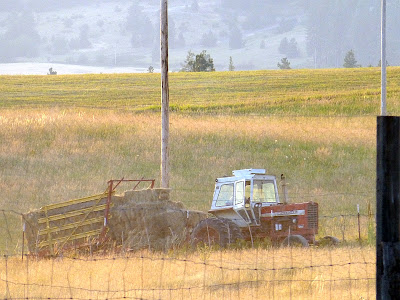 The loader tips upward and tumbles the bales out. 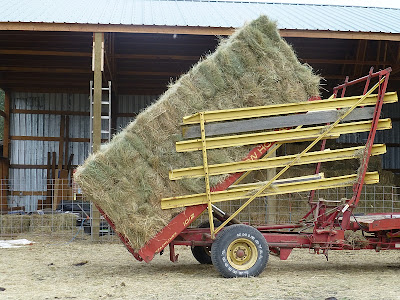 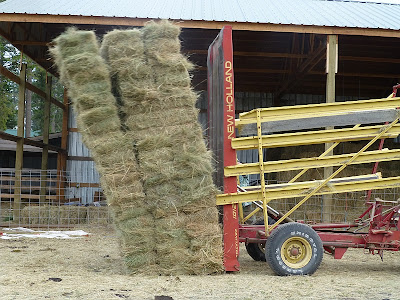 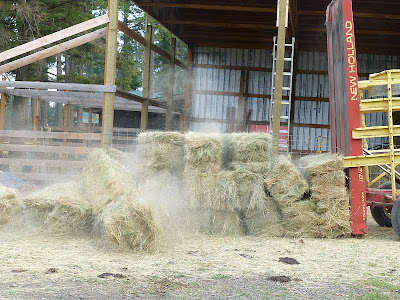 Poor Alan tried to use these built-in feet-pushy-gizmos that were supposed to push the bottom-most bales out, but the durn things got stuck in the "out" position and he spent a frustrating half-hour banging and cursing at the machine until the feet retracted. That's the Big Trouble with farm equipment: it breaks. A lot. 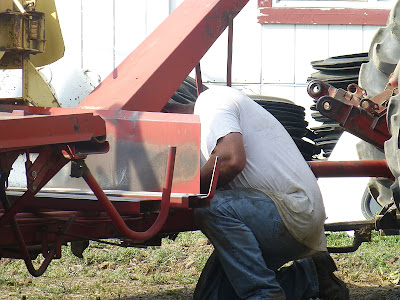 We asked Alan if he wanted to back the loader directly into the barn and stack it that way, but Alan doesn't feel confident about his backing-up skills to avoid hitting the support beams on the barn. Can't blame him, it's a liability issue. So once the bales had tumbled out of the loader, Alan drove off to get another load while Team One stacked about eight or ten bales onto a pallet strapped to the neighbor's tractor and lifted it into the barn. 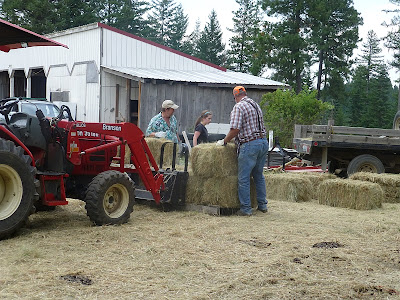 Then Team Two unloaded and stacked the bales. 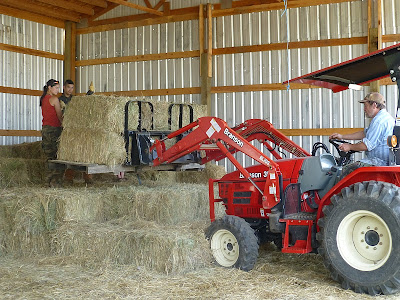 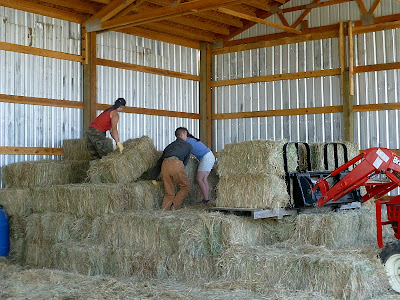 We stacked hay for two evenings in a row (Tuesday and Wednesday), and this is what we ended up with: about nine tons. This is about one-third the amount of hay we'll need for the winter. 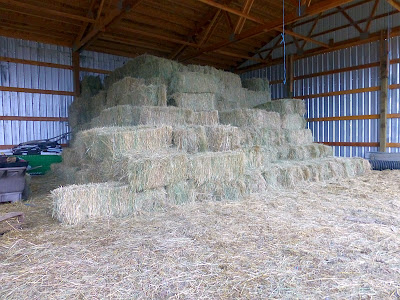 There was a lot of loose hay that had accumulated in front of the barn. Hey, no sense letting it go to waste! We knew just what to do with it. After blocking off the barn with the cattle panels, we sent out the trumpet call of "Bossy bossy bossy bossy BOSSY!!" over the pasture. Within moments the thundering herd was on their way up. 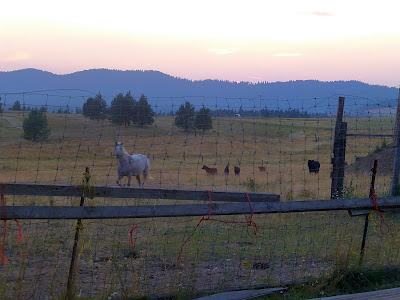 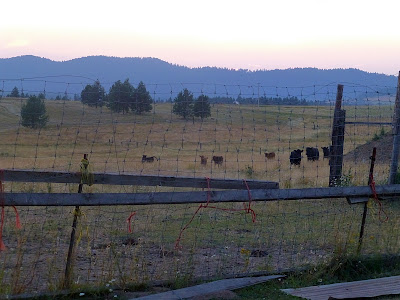 They dove for the hay and munched away happily. 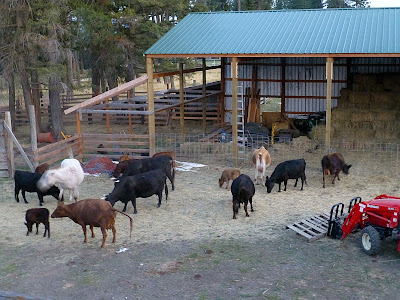 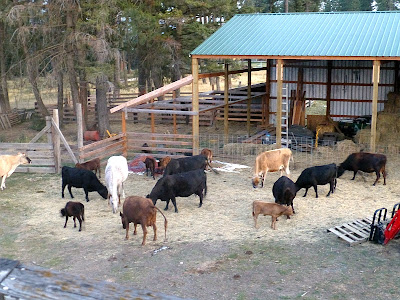 We got all this done just in time. A few sprinkles fell on Wednesday night, but the heavy rain started on Thursday. It rained and rained and rained, about two inches total (quite a lot for this region at this time of year).

The search is now on for about 18 more tons of hay at a price we can afford, in order to have enough for all our critters over the winter. The rain hit at a particularly vulnerable time for many farmers in the region, and hay prices are likely to be high as a result.