This house is proudly gun-free

The silliness, it seems, never ends.

A reader provided a link to an article about how Seattle leaders plan to launch a "gun free zone" program. Local business can invite armed robbery by putting decals in their windows declaring that guns are not permitted. 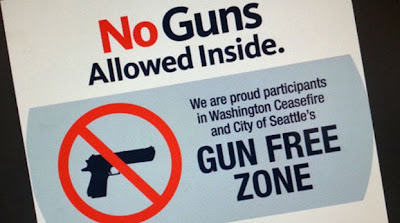 I say "invite armed robbery" because, let's face it, if you're blatantly advertising the fact that you have no effective means to stop theft, what do you think will happen?

To quote the article: “We’re making a statement as a community,” Washington CeaseFire Board President Ralph Fascitelli said in the press release. “We know this won’t stop someone determined to cause violence, but we hope that standing together and giving businesses a tool to say no to guns will change the conversation around gun violence.

So even Mr. Fascitelli admits that criminals pay no attention to laws. What he isn't willing to admit is putting these decals in store windows will instruct criminals on which businesses to target. Duh.

As I noted in an earlier WND column, "Progressives who think private gun ownership is unnecessary have no idea how much their safety is subsidized by their gun-owning neighbors. It’s always a risk when a bad guy decides to try a home invasion. In most cases, it’s not a home security system that stops a robbery; it’s the possibility that he could be met by a blaze of buckshot. It’s that element of uncertainty – does this homeowner have a gun or not? – that keeps you safe in your bed at night."

The same philosophy applies to retail businesses. Law enforcement officers, no matter how dedicated, cannot stop crime. Only personal defense can. When seconds count, the police are only minutes away.

So would proponents of this gun-free program be willing to post such decals in their own personal home windows? Apparently not. In this article, a group called Project Veritas posed as members of a gun-control group asking journalists with the paper that published the names and addresses of gun-permit holders in the New York City area if they'd be willing to put signs on their front lawns that say, "Citizens Against Senseless Violence. THIS HOME IS PROUDLY GUN FREE!"

They were uniformly turned down. To quote the article: Four times doors were closed in the faces of the Project Veritas investigators, three times the signs were rejected, twice law enforcement was called to remove them from the property and three times they found armed guards already on site.

"It’s amazing to see members of our media equivocate and contradict their spoken and written words when faced with the dilemma to declare their own homes as gun free," said Project Veritas founder O’Keefe. "Surprisingly, we found that the homes of the very New York paper that was willing to put the lives and fortunes of gun owners at risk by publishing their names and addresses, were also the most heavily armed and protected. The hypocrisy of New York’s Journal News is beyond words." 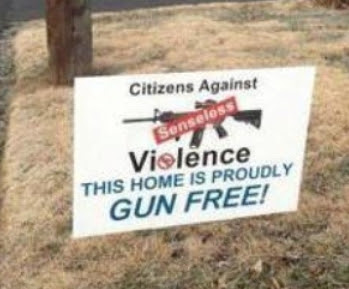 So I would love to ask these Seattle leaders whether they'd be willing to put their money where their mouth is; to wit, post "This house is proudly gun-free" on their lawns.

My guess is the answer would be NO. Even in Seattle.
Posted by Patrice Lewis at 9:50 AM