It was time to move the cattle.

We have two sides of our property in which the cattle can graze: the wooded side (which has limited feed) and the pasture side. But about this time of year, both sides are depleted to the point where the critters could use some fresh grass. 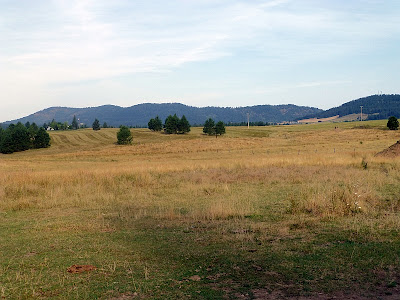 Thankfully the neighbor who owns the vacant 20-acre parcel next to us allows us to lease the property for about two months each fall. We call this parcel the "pond property" because there's a beautiful stock pond on it.

But before we can move the cattle, we have to walk the fence line and make sure there are no gaps or low spots they can escape. So late one evening (after the sun went down -- it was far too hot during the day) Don and I gathered our tools -- wire, pliers, nippers, gloves -- and set off.

(By the way, in the country this is known as a "date night.") This parcel had been mowed for grass hay a couple of weeks ago, which meant we were freed from having to wade through waist-high fields as we walked the perimeter. Still plenty of grazing, though. 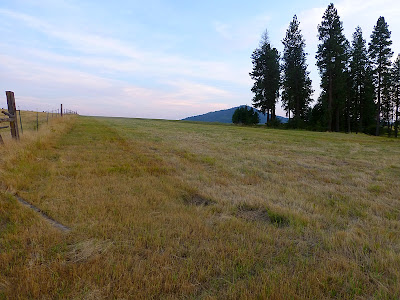 These fence lines were the focus of our attention. 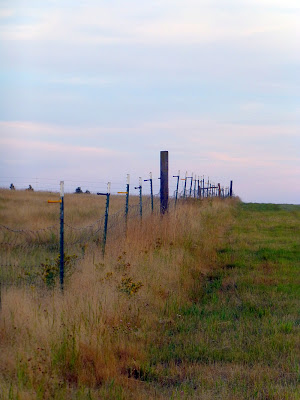 In a number of places, the fence wire had been pushed down (by the horses on the other side) to the point where it was easy for cattle to step or jump over. 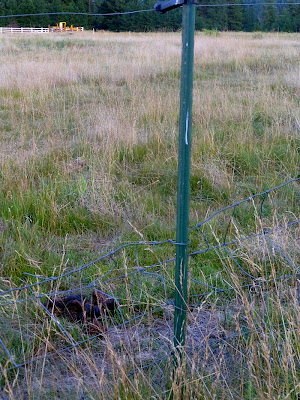 In those spots, we pulled the fencing back up and wired it securely to the T-post. 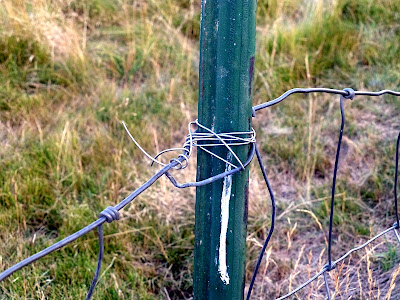 We walked the perimeter of the 20-acre parcel and thankfully only had to make a few minor repairs. (Date night over.)

Oh my, that got their attention!! The older animals knew precisely what was up. Within minutes, they formed an orderly line behind me. 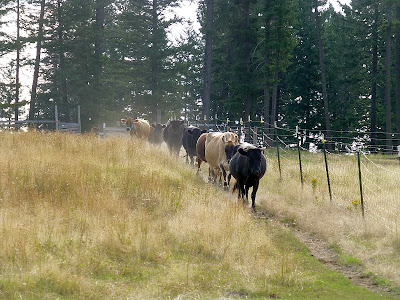 But soon their eagerness overcame their orderliness, and many of them made a mad dash for the gate. 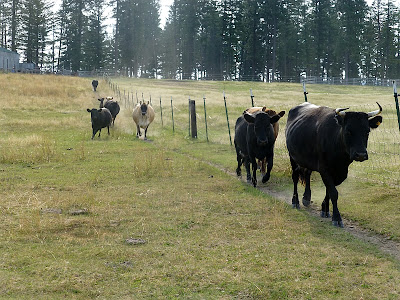 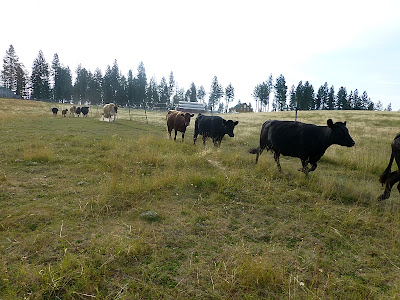 A bunch of them made it to the gate far ahead of me. 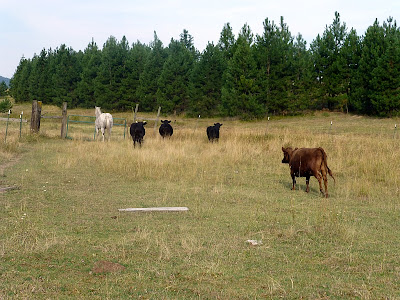 "C'mon! Will you hurry up already?" 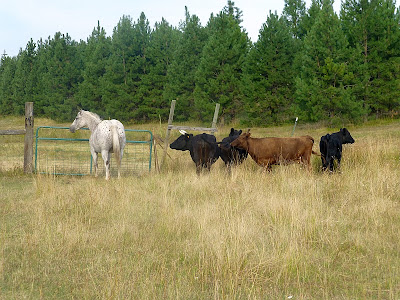 Once I opened the gate, Brit was the first in (as usual). 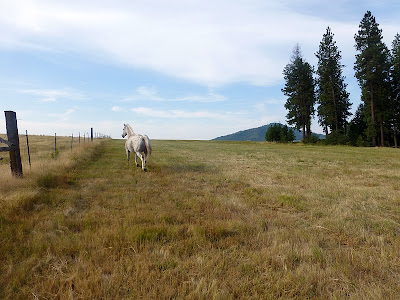 But everyone else soon came pouring through. 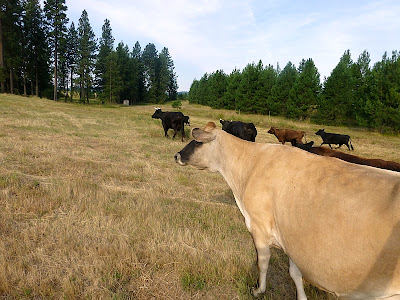 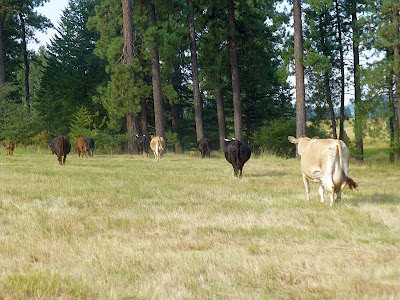 Everyone, that is, except four of the calves who lagged behind and then got mixed up about where to go. 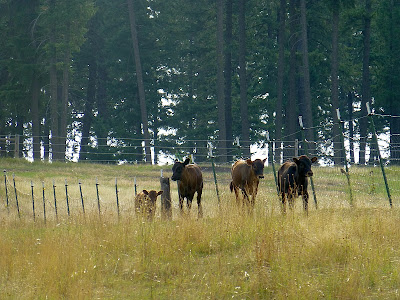 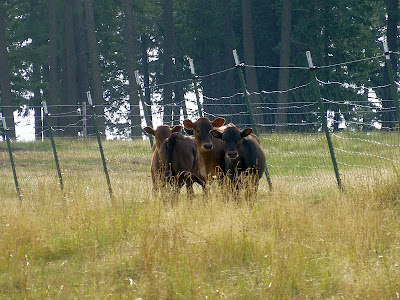 I tried scooting them down toward the gate... 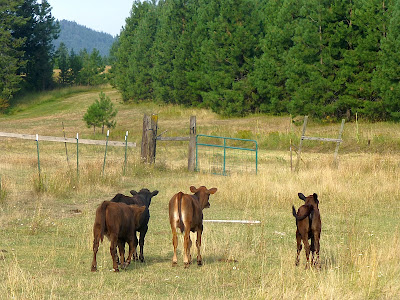 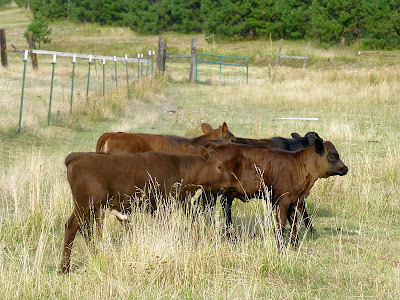 ...but calves at this age are still "puppy stupid" (as we call it) and they kept missing the open gate. 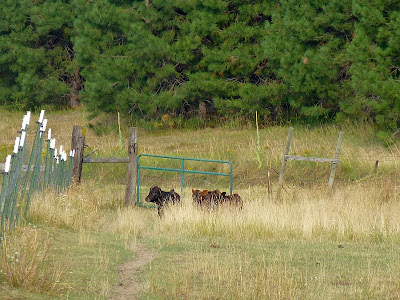 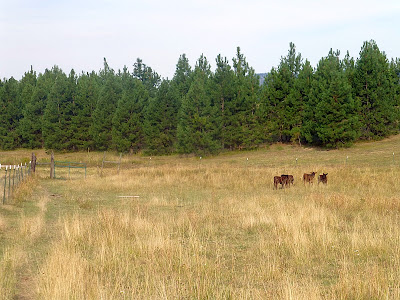 Bottom line, they all four followed me back up toward the house, like little lemmings. 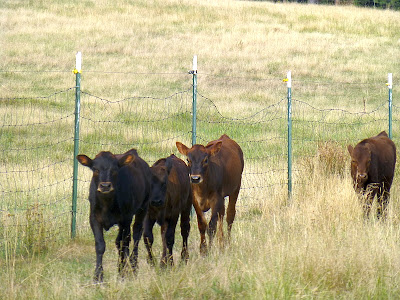 To their dismay, I closed the gate on them to keep them in the pasture. So, confused, they bedded down for a couple of hours right by the gate. 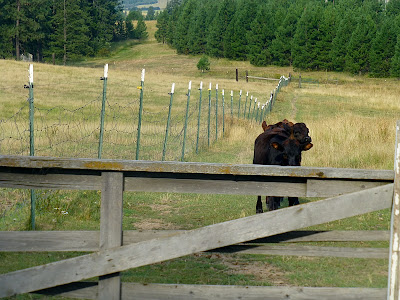 Eventually the cows, grazing greedily in the distance, noticed that 2/3 of their calves were missing, and fetched them down to the pond property. 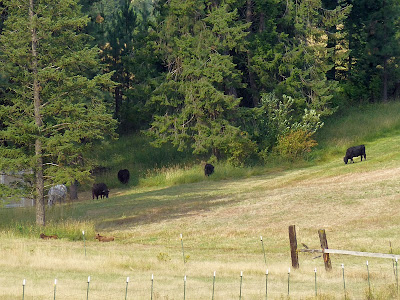 So all's well that ends well. However it meant that in the evening after the sun went down, when I wanted to lock up Polly for the night so I could milk her the next morning, I had a lot of walking to do... since, naturally, she was in the farthest possible corner of the pond property.

As I walked, I saw thunderheads building up in the south. 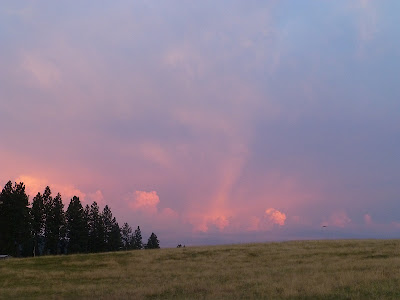 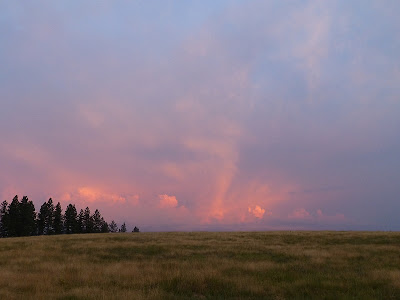 The cows (and calves) were quite happy. 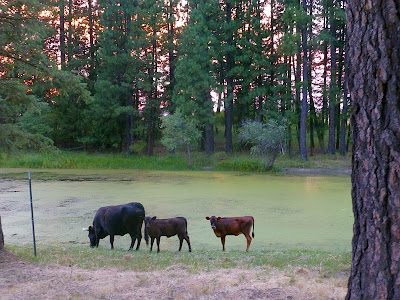 So happy that Polly did NOT want to be led up to the barn. She dragged her hooves the whole way. (Sorry for the blurry photo.) 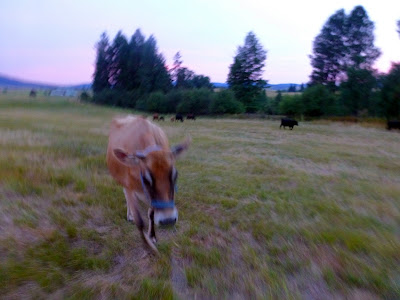 We had an impressive show of thunder and lightning that evening, and a massive storm cell was heading straight toward us. Unfortunately it juuuuust barely missed us and skirted about a mile to the west. We stayed dry. 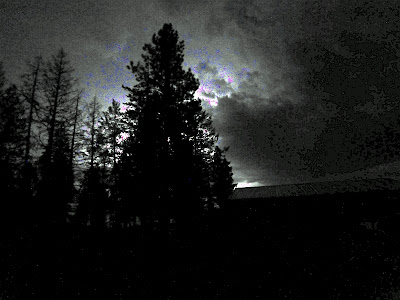 It's worth noting we've barely seen the cows in the last few days. They're happy as clams where they are!
Posted by Patrice Lewis at 3:58 PM