Caught in the act

4 pm, Thursday afternoon, June 6. I was out in the garden when I heard the sound of a low-flying aircraft.

This is nothing unusual. We have a neighbor who's a pilot and has been known to circle around the neighborhood. We usually wave to him.

But the sound of this aircraft, for whatever reason, made me look up... and then my jaw dropped. My sunhat fell off as I craned my neck skyward. It was a DRONE. An honest-to-goodness drone, with an unmistakeable profile. It flew straight over me, directly south-to-north, and disappeared over the horizon.

Shocked, I walked into the house and said, "You'll never guess what I just saw."

Don did some hasty research and asked if this was the aircraft. 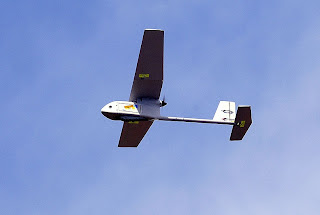 I can't attest to the color since it was above me against a bright sky, but that was certainly similar in shape. He asked me what size it was. I said, "My dad used to fly Cessnas and it was about half the size of a Cessna."

Frustratingly, it was one of the few times I did NOT have my camera on me, because it would have been an easy thing to photograph. It was low and slow enough to focus and shoot (with a camera, folks, not a firearm).

Whatever the nature of this drone, I'll confess: it caught me in the highly subversive act of weeding the strawberries.

I hope they got an eye-full.
Posted by Patrice Lewis at 9:26 AM

Email ThisBlogThis!Share to TwitterShare to FacebookShare to Pinterest
Labels: drones