King of the compost pile

A few months ago, in mid-March, I took this photo of our white rooster on top the compost pile. 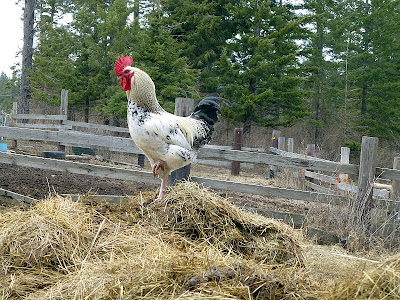 Well, the neatest thing happened. A regional artist by the name of Andy Sewell saw the photo and asked permission to paint it. I sent him the high-resolution version, and this morning he sent back this! 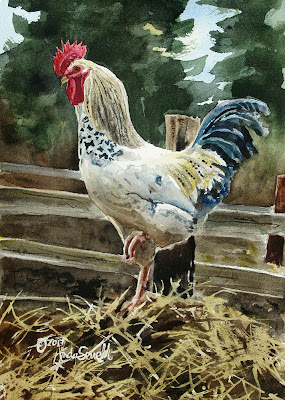 This is just too cool for words!!!!

I've been an admirer of Mr. Sewell's work since 2003 and we moved to Idaho, when I first saw his landscapes. I'm honored beyond belief that he chose to use one of my photos to paint.

He named the painting "King of the Mountain." The rooster is actually king of the compost pile, but that's not nearly as catchy a title. It did, however, inspire a name for this formerly-nameless rooster: King.

Mr. Sewell is selling prints of the painting here, or even the original if you're interested.
Posted by Patrice Lewis at 7:07 PM