Oh the weather outside is frightful...

After some hot days in the 80s, we suddenly switched into a last blast of winter. It rained yesterday but it poured today -- a drenching sideways rain with howling wind.

I was concerned about Ruby, one of our herd matrons. From the looks of her udder, she's due to calve next. Ruby is an experienced mother and normally I wouldn't worry about her having her calf out in the field, but I didn't want a baby born in adverse weather as was predicted. So yesterday we pulled her into the barn and corral. Here she is, looking sulky, standing out in the rain. 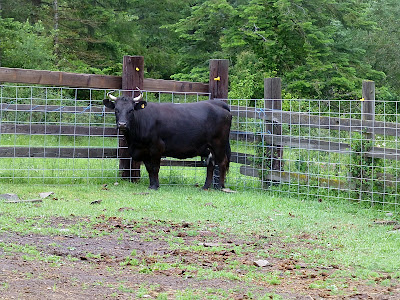 Here's her udder, bagging but not yet turgid (which happens a few hours before birth). 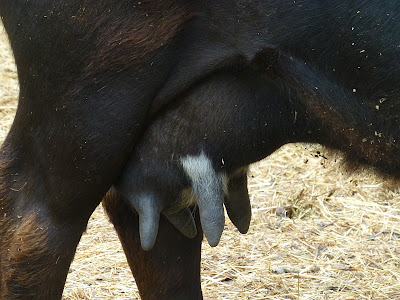 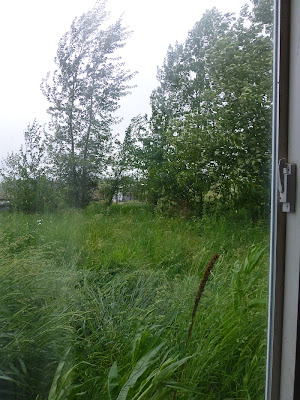 It was a decidedly chilly 42F outside... 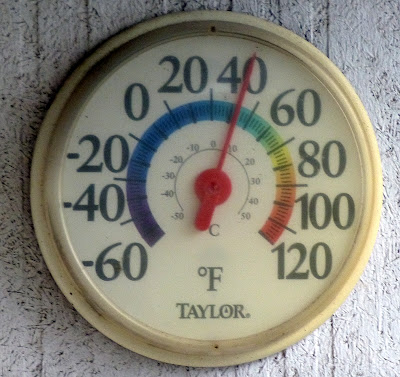 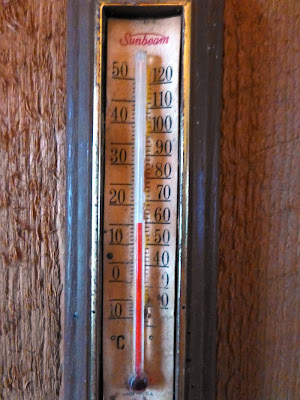 I finally gave in and started a fire in the woodstove. 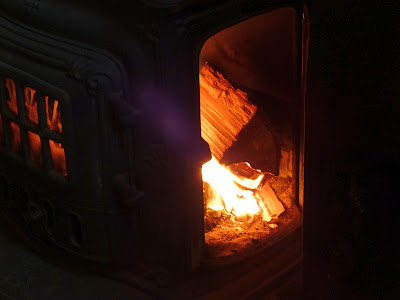 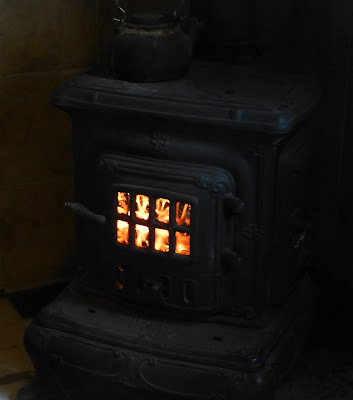 But I felt very bad for the livestock. The pasture doesn't have a lot of shelter, and the dominant animals took over the one loafing shed we have. This mean the less dominant animals (including the calves) were out in that drenching rain. 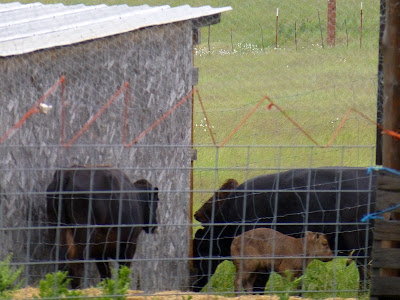 So early this morning Don and I decided to give the critter access to the new barn. We removed two cattle panels which had been blocking access and used them to partition off the small bales we didn't want destroyed. 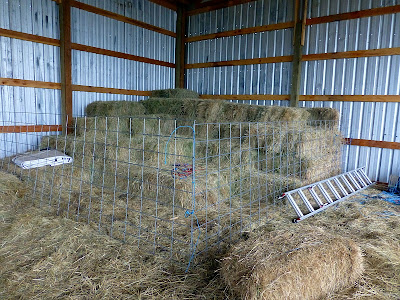 Then over the roar of the wind and rain, I yelled "Bossy bossy bossy bossy BOSSY!!!!," which is our universal cattle call. Within moments, animals came thundering up from the pasture. 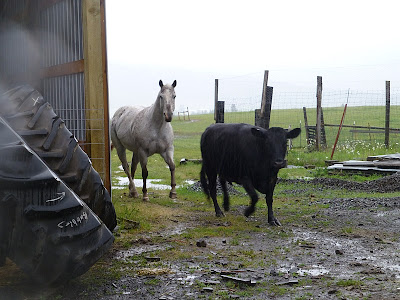 They had no idea why we'd called them up, but it took mere moments to notice the barn was available. Matilda figured it out first. 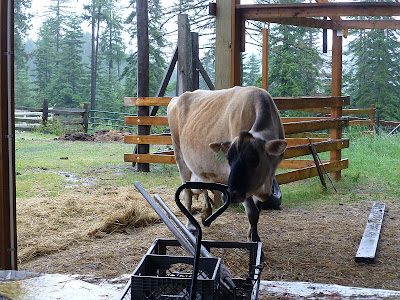 Soon most of the critters were under cover or at least had shelter available. Notice the water droplets on my camera lens? 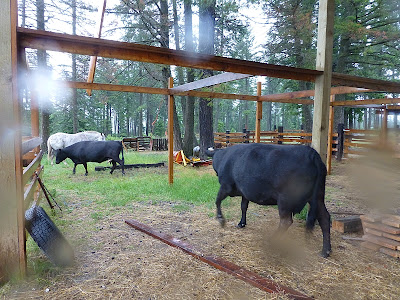 But wait -- where were Polly and the calves? A wet walk through the pasture (remind me to patch that crack in my right boot so my sock doesn't get soaked) revealed that they'd taken over the loafing shed since the dominant animals had vacated it. The calves were drenched and shivering. 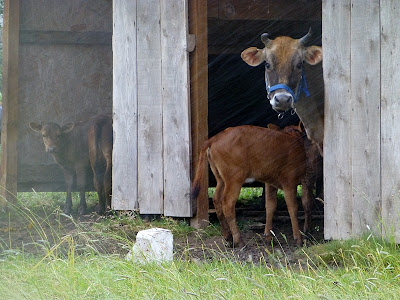 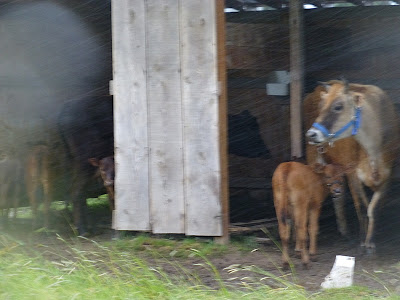 So I shooed them out and, without further prompting, they made a beeline for the barn. 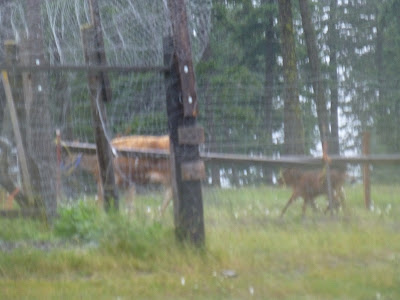 By the time I came back in the house, I was pretty drenched too. 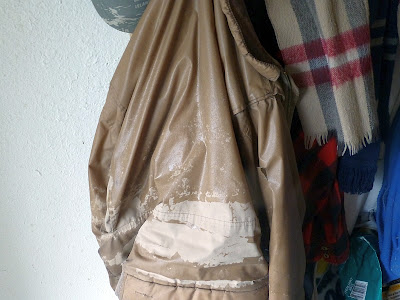 When I checked in on everyone later, the babies were bedded down in the straw, chewing their cud, looking vastly happier. 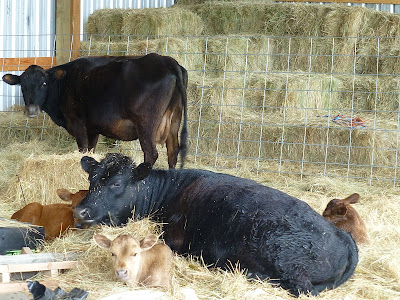 By afternoon the wind had died, but the rain was still coming down. The temperature barely budged all day. 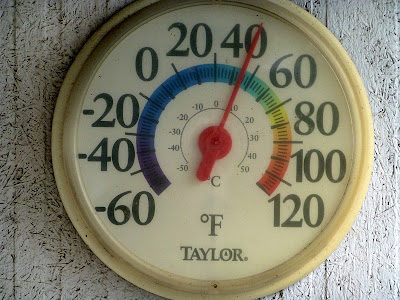 But the calves were dry. And durned cute too. 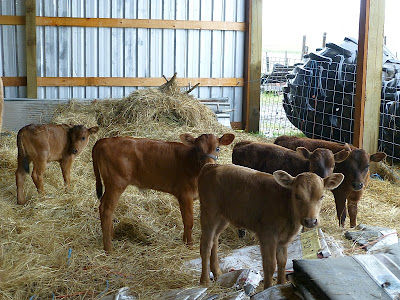 We'll keep the barn open until the weather moderates, probably by this weekend.

Posted by Patrice Lewis at 6:04 PM