Last Sunday I attended an eight-hour class to qualify for my Utah concealed carry permit. And oh my, it was fabulous. 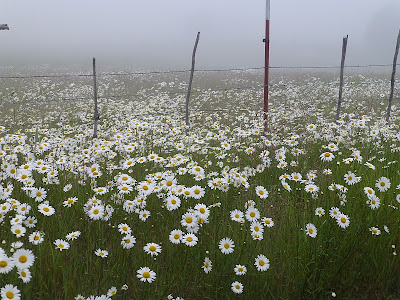 The reason I left so early (the class started at 8 am) was because Sunday was the Ironman Triathlon in Coeur d'Alene (swimming, biking, running). I knew the highway was used for a portion of the biking part. Sure enough, the northbound direction was completely blocked off... 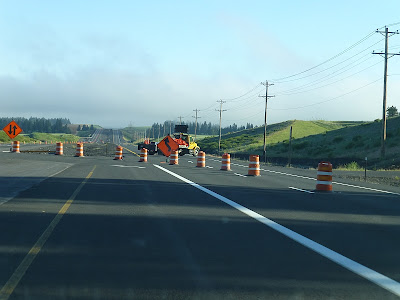 ...requiring a careful threading at slower speeds through endless miles of traffic cones in the southbound lanes. Kinda freaky, but everything was clearly marked. 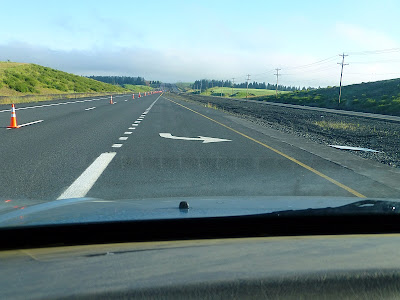 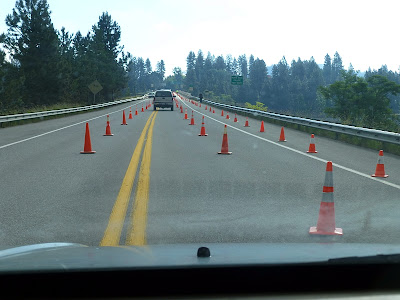 The class was held at a facility called Center Target Sports in Post Falls, ID. 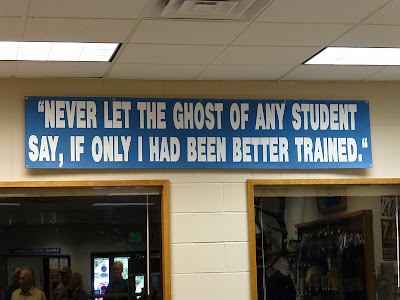 The course was taught by Ed Santos, the founder of Center Target Sports. He has astoundingly solid credentials, listed here. 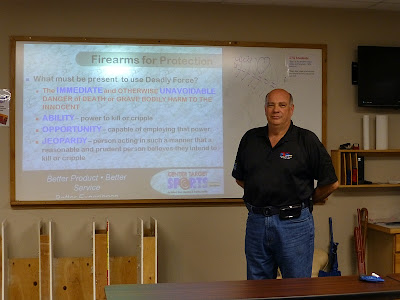 The class came with a 25-page packet containing a detailed course outline, as well as a CD containing additional information, laws, etc. There is no excuse for ignorance once this class is over. 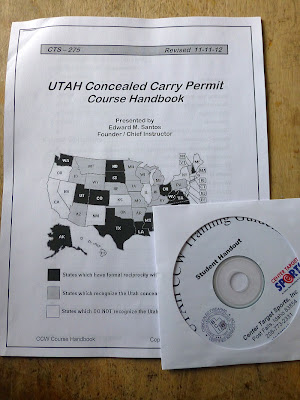 The part that had me the most nervous was the proficiency test. Not because I doubted my shooting accuracy (I'm actually quite good), but because I had to drill a target the size of a pie-pan at seven yards with 20 shots in 2.5 minutes. No biggee, EXCEPT loading the magazines in Don's .380 is devilishly hard. I had two magazines which held six rounds each; which mean both magazines had to be full-reloaded twice, plus reloading another two rounds a third time. All in 2.5 minutes. Not good.

Here's the shooting range. Each student stood in a little open-backed booth and shot into the open range at targets in their own lane. 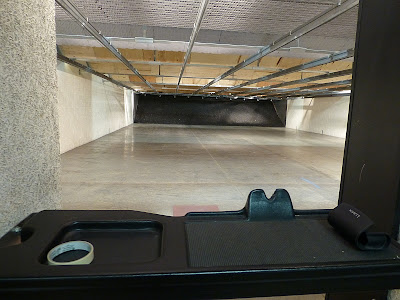 My equipment. (I was already wearing the ear protection.) 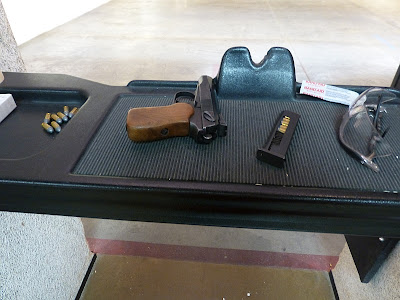 So what happened? Well, I discovered a fascinating little detail: I couldn't see the gun sights.

You see, I'm terribly nearsighted, so I wear either glasses or contact lenses. However my near (close up) vision is extraordinary. I like to call it X-ray vision. If anyone ever needs a microscopic splinter removed, they come to me because I can see it clearly.

However when I wear contact lenses (as I usually do when I travel into the city), then my focus changes. I can see far things clearly, but I desperately need reading glasses, go figure.

So when it came time for the proficiency test, I was at a double disadvantage: I wasn't wearing my reading glasses and so I couldn't see the gun sights; plus I had to load the devilishly difficult magazines on Don's .380. I was literally shooting blind, and I ended up hitting the target only 12 out of the required 20.

But Mr. Santos, the instructor, quietly handed me a store-owned .22 with an easily-loaded magazine that held 12 rounds, as well as a bag of .22's. I was the only student who had to re-take the proficiency test.

This time I put on my reading glasses under my protective goggles, so I could see the gun sights. Everyone was watching me, since no one else was shooting (they'd all passed their proficiency without a problem). When the timer started, I nailed -- NAILED -- 19 of the 20 rounds into a diameter about four inches across (the 20th round was still within the pie-pan sized target, but not clustered with the others). I did this in under a minute, including popping out the magazine, re-loading it with eight additional rounds, and re-inserting it. Amazing what you can do when you can SEE. And LOAD. 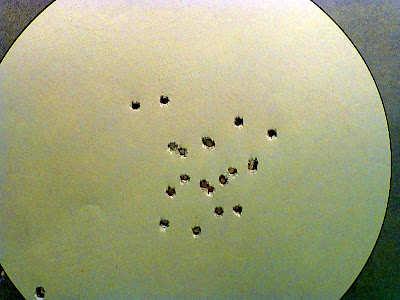 Phew. Glad that was over. The instructor had us all sign and date the targets, which are then kept on file in the facility as proof that we qualified.

The proficiency portion occurred early in the day, so we all trooped back to the classroom for the rest of the course.

I learned a great deal about when deadly force should be used (hint: it's NOT to shoot pickpockets who are running AWAY). Situations under which deadly force is justified include:

- The immediate or otherwise unavoidable danger of death or grave bodily harm to the innocent.
- The ability of the perpetrator to kill cripple. "Ability" can take various forms, such as the perpetrator having a weapon, a disparity of force (such as armed against the unarmed); able-bodied against the disabled; male against female; physical size and strength.
- Opportunity (the perpetrator is capable of employing that power).
- Jeopardy (the person is acting in such a manner that a reasonable and prudent person believes they intend to kill or cripple).

The instructor also touched on the best place to shoot to take someone down. Not a fun topic, but a necessary one.

We were also told that having our firearm on our person is one of the safest places it can be. While carrying, our firearm is accessible when we need it (because, after all, no one KNOWS when they'll need their firearm) and not likely to be stolen or taken off a nightstand by a child.

During the course of the day, we peppered the instructor with endless "What if?" questions. He also gave us many many anecdotes (some verbal, some on video clips) of various situations when firearms were used properly, and when they weren't.

The thoroughness of this course was underscored by Mr. Santos' promise: We can all repeat the same course, whenever we want to, for free (as a refresher); and should the need ever arise where we need his testimony in court, he will provide that testimony for free.

Later in the day, Peggy Santos (Ed's wife and co-founder of the facility) fingerprinted everyone and walked us through the paperwork. Each of us left fully qualified and ready to send off for our Utah concealed carry permit.

I can't recommend this course highly enough. I know there are some places where people can get quickie Utah CC classes, but I wouldn't trust those. I wanted the longer course for two reasons: (1) to demonstrate that my commitment to safely carry concealed is high; and (2) to learn the legal ins and outs of responsibly carrying concealed.

Center Target Sports offers dozens of classes. I plan to enroll with our girls in some of the courses on not being a victim, self-defense, and other useful subjects for young women to know.

Great class. Glad I took it.
Posted by Patrice Lewis at 2:56 PM