Most of the fruit I've been canning lately is in anticipation of fruit salads in the coming months. During the long cold Idaho winters, there's nothing better than an enormous bowl of fruit salad in the fridge.

And of course, the time to can that fruit is now, when everything is abundant and relatively inexpensive.

I have plenty of applesauce and apple pie filling canned up. Neither of those are meant for adding to fruit salad. What I wanted to can is what I call "apple bits" -- namely, diced apples.

Back when we lived in Oregon, we had lots of apple trees and I canned apple bits all the time. Here in Idaho we have no fruit trees (at least, none that are producing anything) so I need to purchase tree fruit if I want to can anything. That's how I came to have an entire box of Fuji apples I bought specifically to turn into apple bits. 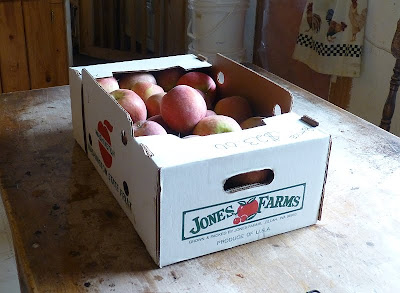 I don't like Red or Yellow Delicious apples, as they're far too mushy and taste terrible in a fruit salad. I like a firm apple, and Fuji fit the bill well. Beautiful things. 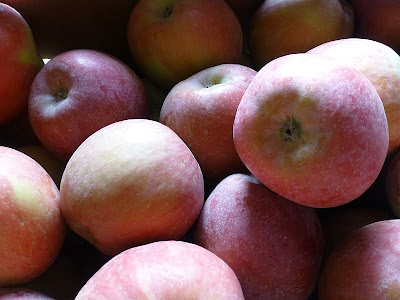 I used my handy-dandy apple peeler, which peels an apple in about five seconds. It will also core and slice, but I didn't use that function. 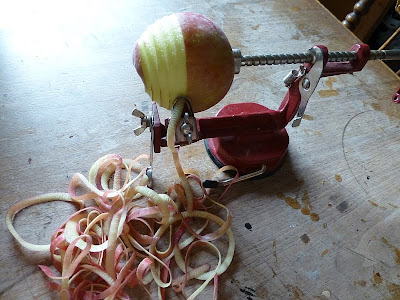 I peeled between seven and nine apples at a time, and processed those through before starting another batch. 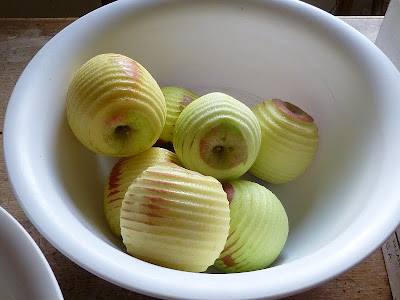 I usually had to trim a little of what the peeler missed. 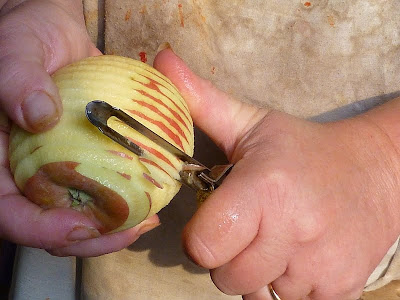 Then I quartered each apple, nipped out the core, and diced. 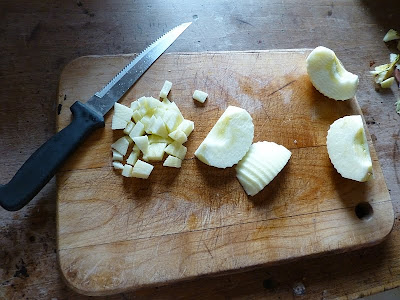 When I finished dicing the batch of applies I'd peeled, I poured a little lemon juice over the pieces... 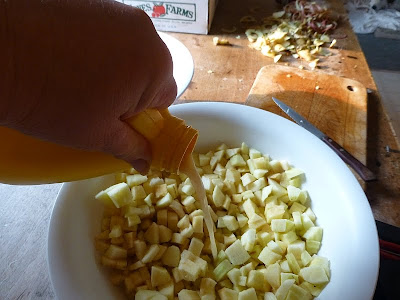 ...and mixed it in thoroughly. This kept the apple bits from going brown. 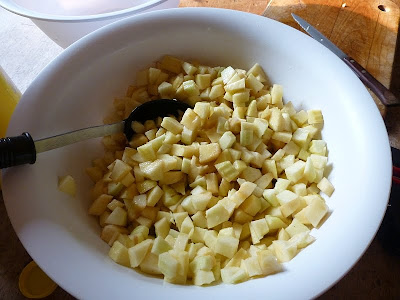 Meanwhile I started some water heating to a boil. 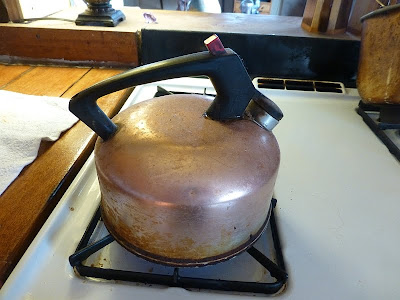 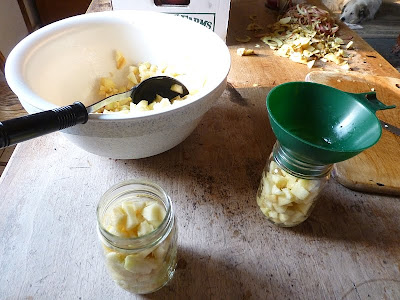 Because these apples are destined for fruit salad (which is plenty sweet), I didn't want to can the apple bits in syrup. I wanted to can them in plain water. So I merely poured the boiling water directly over the apple bits and called it good. 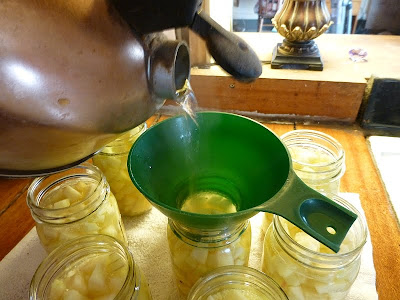 That was the first round of applies. I peeled and diced the next batch, and filled jars. Then another batch. And another. 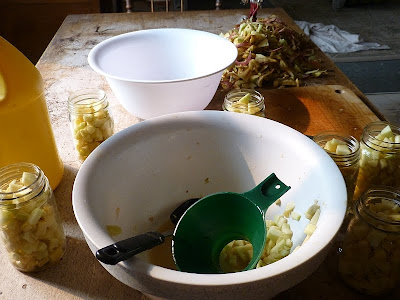 I don't know if that box of apples was magically re-filling while my back was turned, but it seemed bottomless. Younger Daughter kept having to wash more jars to keep up with me. 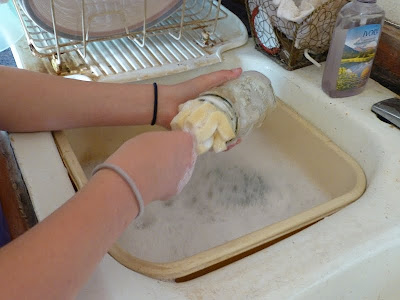 Finally, at last, the box was empty. I ended up with forty pints of apple bits. I don't know why that surprised me, but it did. I guess I had it in my head I was only going to get two dozen or so pints. 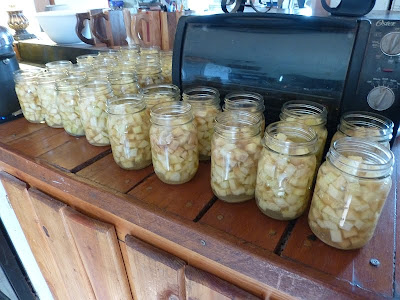 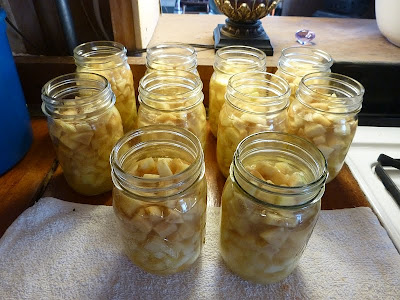 Now that I knew how many jars I had, I could prepare the lids. I boiled a pot of water, turned off the water, and let the lids and gaskets soak in the hot water for a few minutes. 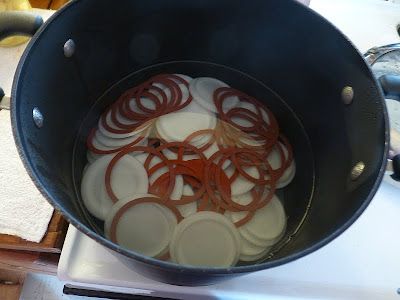 Even though the jars weren't filled with sticky syrup, I still wiped the rims. Besides cleaning, it also allows me to feel for any nicks I may not have noticed earlier. A nicked rim means the jar won't seal. 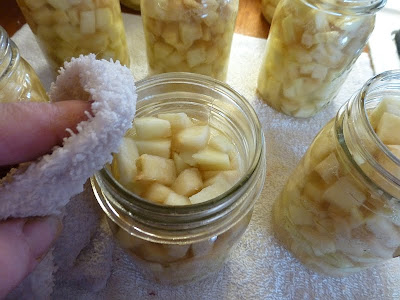 Lids and gaskets on. 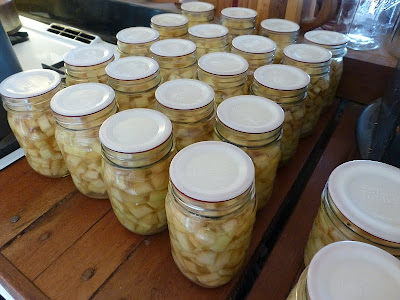 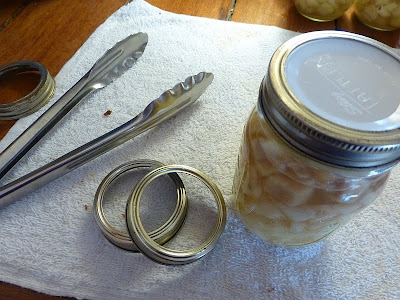 Apples are acidic, so they can be water-bath canned. My biggest pots hold seventeen pints between them. 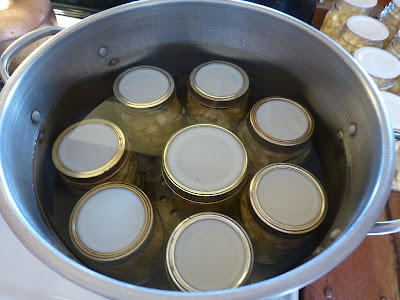 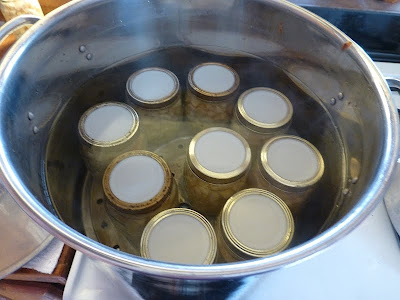 Once the water reaches a rolling boil, I let them process for 25 minutes. Usually apples only need to process for 20 minutes, but we're at 2700 feet elevation, so I added a few minutes extra. 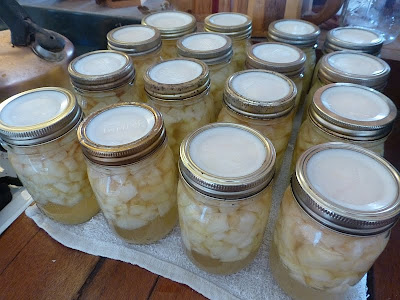 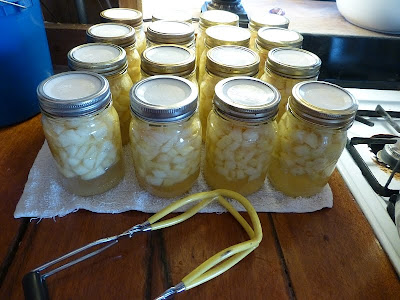 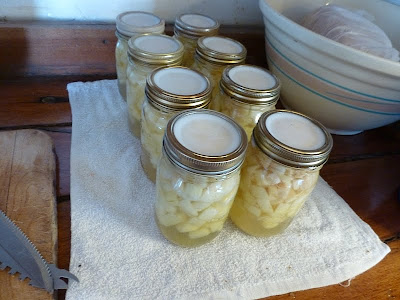 Once the jars cooled, I labeled them. 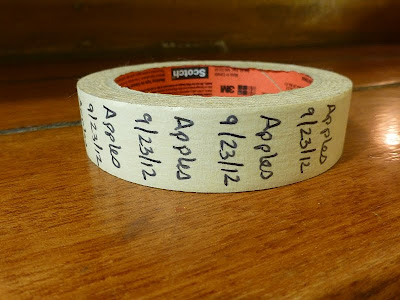 I washed a few jars that got sticky when they vented after being removed from the water-bath. 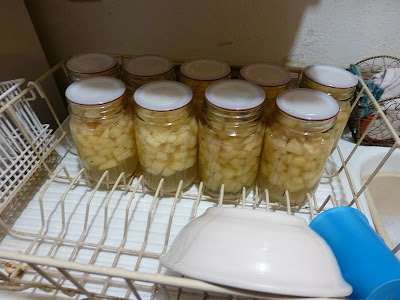 I also scrubbed my rings. I encourage canners to keep their rings scrubbed so they don't accumulate gunk. They also helps resist rusting. (And remember, never store jars with the rings on.) 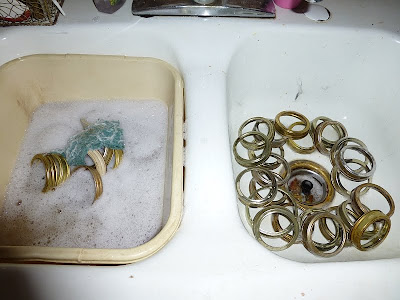 Drying (ring side down, of course). 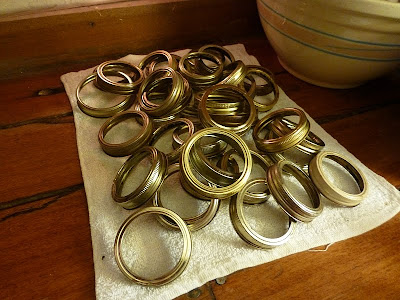 This is what I love about canning. I can take a seasonal fruit and turn it into something that is preserved for years in my pantry. How cool is that?
Posted by Patrice Lewis at 7:07 AM