Our neighbors have a daughter Anna who just turned six. For weeks our Younger Daughter planned a birthday surprise for little Anna in which she made dozens of paper dolls and angels, as well as four houses/castles. Then she conscripted the aid of Older Daughter and some of Anna's brothers to carry all the dolls down to the woods, where she strung up the angels from branches and set up the doll houses in bowers of branches. 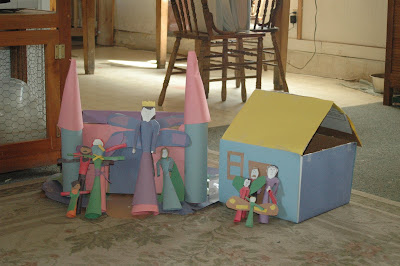 Little Anna was thrilled to pieces. And Younger Daughter is glad to (a) finally stop making paper dolls, and (b) get all that stuff out of her closet.
Posted by Patrice Lewis at 11:00 AM