A loss of innocence 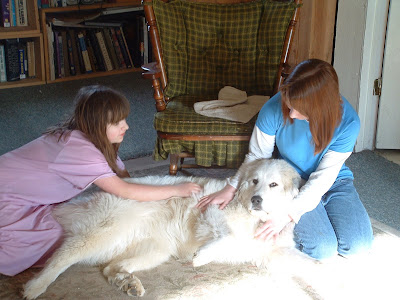 Occasionally some non-comprehending troglodyte will question us as to why we homeschool. The implication, of course, is that we're raising a couple of stunted misfits who will never amount to anything.

For us the reasons we homeschool have never been about religious instruction or academic superiority or anything like that (though of course those are serious considerations). No, from the first, the primary reason we've chosen to homeschool is because of...socialization.

Which is pretty funny when you think about it, because that's the Numero Uno argument the public school defenders always bring up. "What about socialization?" they'll bleat, as if socialization were the sole and exclusive reason children attend school in the first place.

Just this morning I read a news article about the use of inhalants by 12-year-olds. Twelve! My youngest daughter will be twelve in two months!

"When their kids turn 12," says the CNN article, "parents are concerned about peers pressuring them to smoke cigarettes, drink and use drugs, but it turns out 12-year-olds are doing something else: getting high on inhalants.

"A new national survey from the Substance Abuse and Mental Health Services Administration report finds that they're using inhalants more than marijuana, hallucinogens and cocaine combined.

"Some young people are sniffing -- inhaling -- a wide variety of products to get high. Inhalants are legal, cheap and everywhere. They can easily be found in most homes: spray paint, shoe polish, glue, air fresheners, hair spray, nail polish, gasoline, aerosols, computer cleaners, even the refrigerant from air conditioners."

So...does it still strike you as abnormal that we prefer to keep our daughters away from this kind of "socialization"?

Schools today are so damned obsessed with sex, political correctness, and academic mediocrity that I question how anyone could, in good conscience, subject their innocent children to this kind of sludge. The emphasis on children today is to grow up too fast. That's why such outfits as Ambercrombie and Fitch have clothing suitable for "prosti-tots."

But why? Why must children grow up so fast? Why must their innate innocence be stripped away so rapidly? My "tween" daughter is mature for her age (I'll specify that's mental maturity) but she retains an air of sweetness, wholesomeness and (dare I say it) childishness I find wonderful. And why shouldn't she act like a child? She IS one.

She also shows remarkable discernment about young people her age. It's become something of a standing joke with both our daughters. We'll pass a teenage boy who looks, well, like a typical teenage boy...and one or the other daughter will whisper, "Hey mom! Is that the kind of boy you want me dating?" I consider this superb practice for when they really are dating.
Posted by Patrice Lewis at 8:15 AM