Cleaning under the awning

Long-time readers will remember when Don built the awning off the barn two years ago. 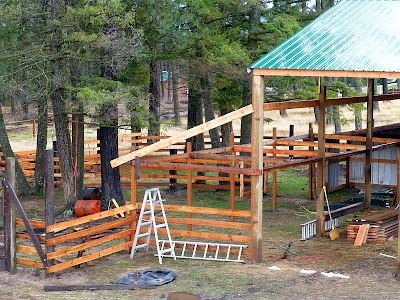 Then last year he built feed boxes under the awning. 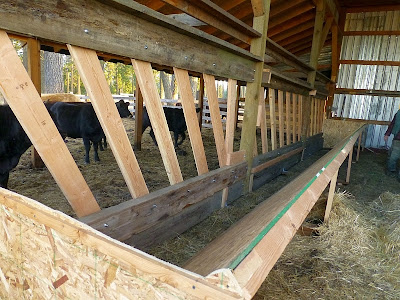 Both additions to the barn have proved highly successful and have contributed greatly to the comfort of the animals, especially in winter.

But we hadn't addressed one side-effect: the accumulation of waste under the awning.

Thankfully most of this waste wasn't hay (thanks to the feed boxes) -- it was accumulated mud and manure (mostly manure). Over last winter it had built up quite a bit... 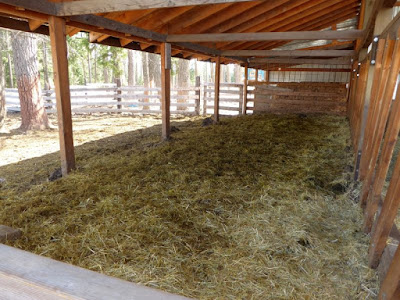 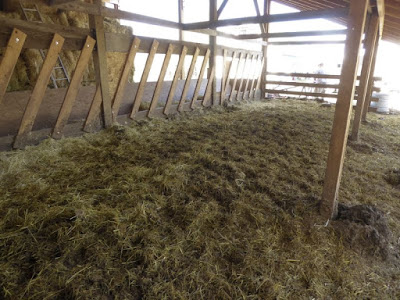 ...to the point where it was pushing out the bottom board of the feedlot fence. 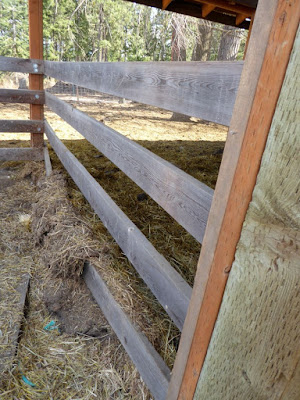 Here's the view from inside the feedlot. The fence being pushed outward is on the right. 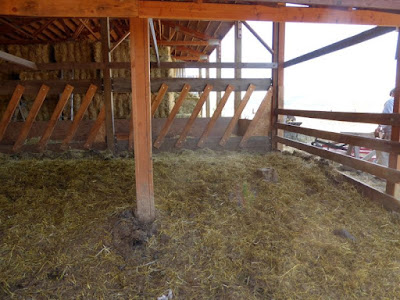 One of the projects Don wanted to accomplish before winter hit was to clean out under the awning. But he was stymied by the mechanics of getting the tractor positioned correctly to scoop out the manure most efficiently. "If only I could come in from the side," he mused.

So that's exactly what he did. He realized if he removed the side fence from under the awning and replaced it with a gate, it would allow him to use the tractor and remove the manure easily. We didn't realize it until later, but this arrangement will also make it far easier to load or unload livestock, since the outward-swinging gate will make a sort of chute.

First thing he did was buy a tube gate (it's on top the wood rack on our pickup truck). 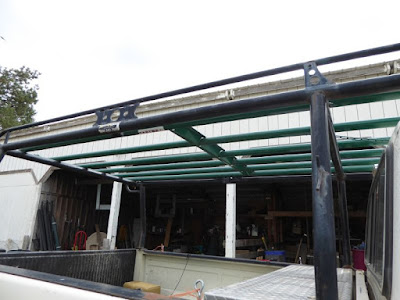 Next he removed the side fence under the awning. 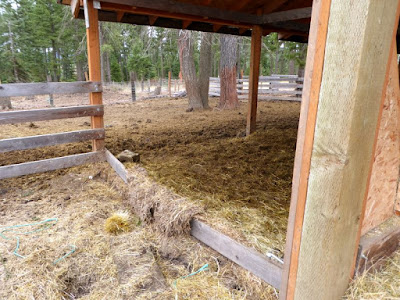 I thought this bottom board was cracked under the pressure of the built-up waste, but I was wrong; it was merely very warped. 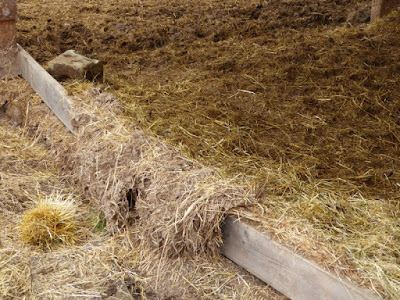 Don used the fork tines on the tractor to lift it out. 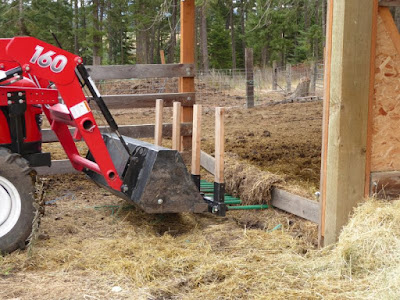 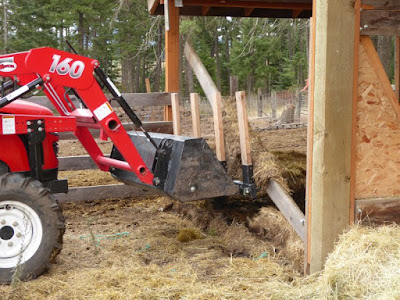 Naturally the chickens took advantage of the situation. 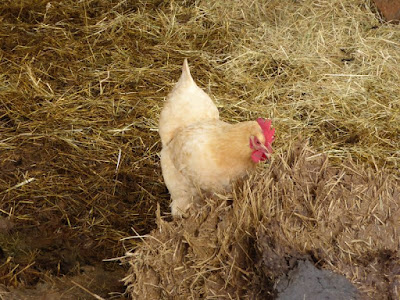 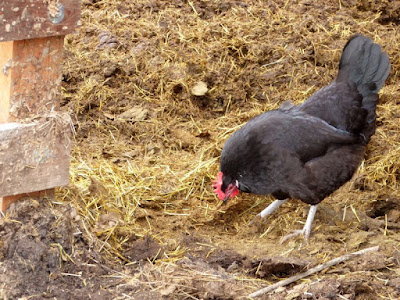 With the obstacles out of the way, Don wondered how hard it would be to remove the compacted manure, so he took an experimental scoop -- and found it was easy as pie. He was tickled pink and couldn't wait to finish the job. 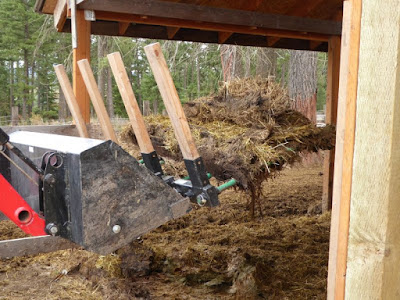 But since he couldn't start until the next day, he hung the gate instead so we could let the animals back into the feedlot. 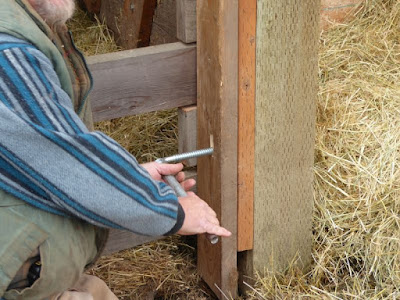 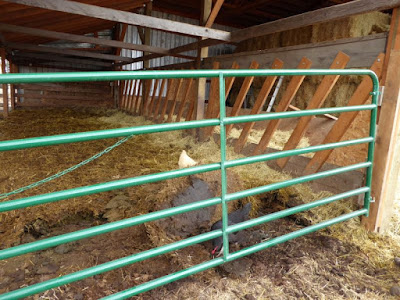 The next day he got an early start. We booted the beasties out of the feedlot... 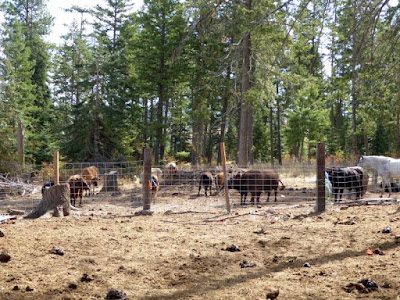 ...and he opened the gate and began scooping. 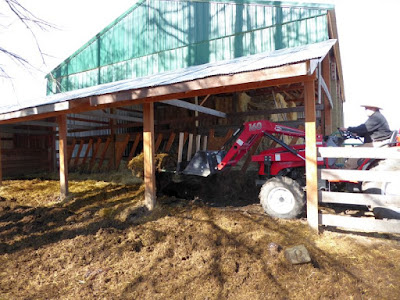 He couldn't believe how easy it was (this man loves his tractor!). 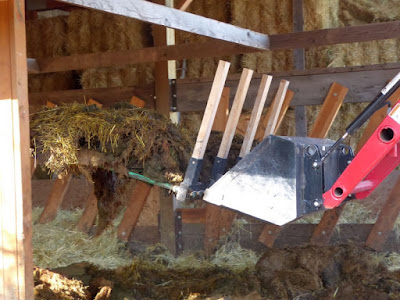 He dumped all the waste in the spot we use for dumping barn compost. It's mostly empty at the moment since a neighbor took most of it in the spring for his garden, so we had plenty of room for a fresh pile. 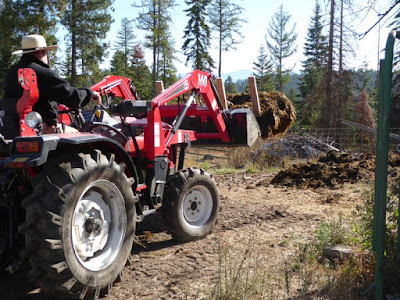 He made rapid progress. 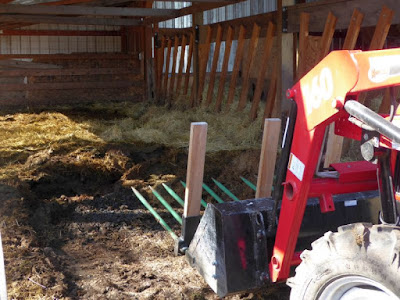 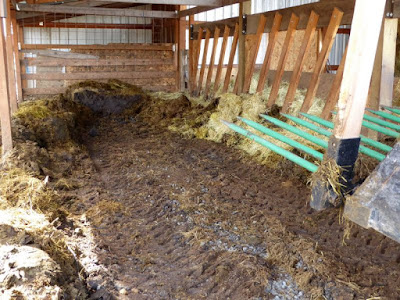 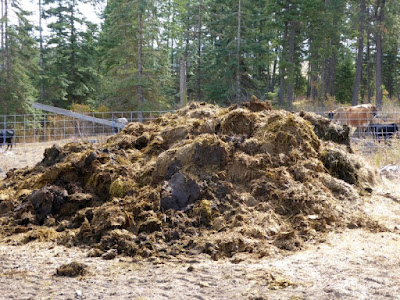 ...and the chickens grew happier. 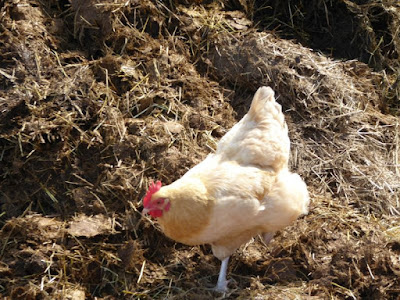 In the end, the waste pile was enormous. We couldn't be happier with this stuff. Since it hardly has any hay mixed in, it will compost rapidly. By spring we'll have several hundred pounds of beautiful compost to add to the garden. 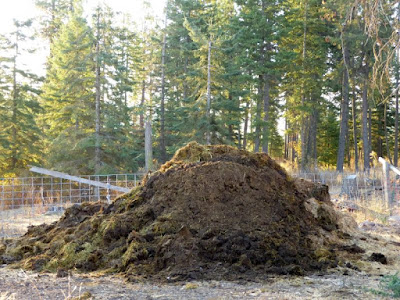 In fact, look how beautifully it's steaming in the chill morning air. (This is why I like to say I ♥ cow poop.) 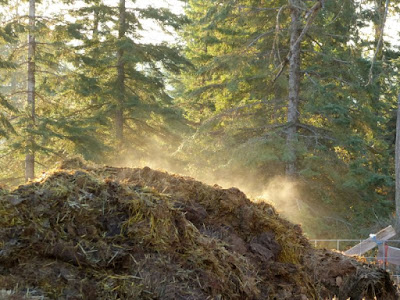 After some hand-work cleaning out corners and edges, this is what it looked like under the awning -- a vast improvement. 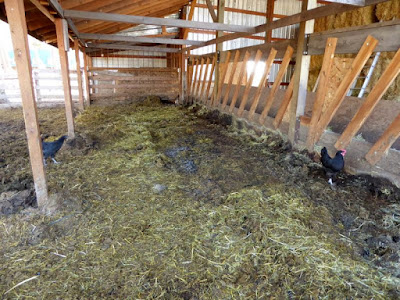 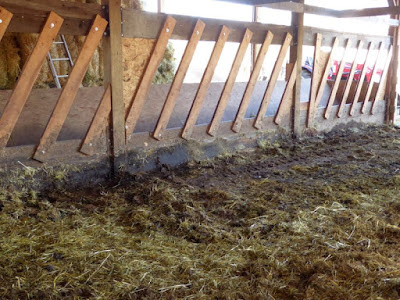 It also cleared out this little postern gate. When Don first installed it while building the awning, he accidentally put the hinges on the wrong side, meaning the gate would only open into the awning instead of into the barn. Naturally the manure buildup under the awning blocked the gate. He took this opportunity to remove the hinges and put them on the other side, which allowed the gate to open inward under the barn. 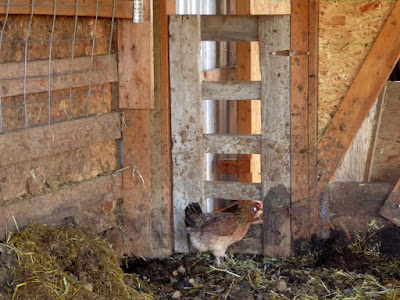 Now that the new tube gate is in place, it will be far easier for Don to use the tractor to clean out the awning during the winter, preventing this kind of buildup in the first place.

Just one more step on the road to homestead efficiency.
Posted by Patrice Lewis at 6:35 AM