Wind and windfalls, dust and smoke

It looks like we've finally broken the back of summer. Normally that phrase applies (with relief) to a long hard winter, but frankly this has been a nasty summer full of horrific heat, utter dryness, and inferno fires. So yes, I'll say (with relief) that summer appears to be over.

Fires have been on everyone's minds around here. We're still waiting on pins and needles to learn whether some friends got burned out (they had to evacuate their farm and it's been hard to get in touch with them). The last two weeks have seen a lot of smoke our way, blowing in from more distant areas. 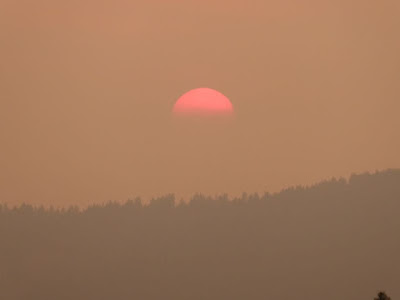 These photos were taken August 21. Don and I had taken a walk. The air was reasonably clear. Within ten minutes of returning home, the wind shifted, and this was the result. (By the way, there's a butte behind all that smoke.) 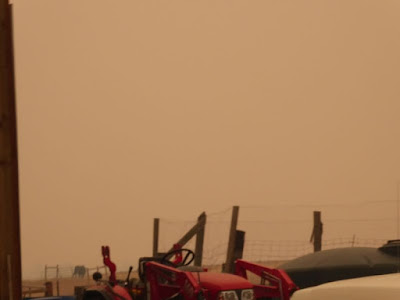 It brought headaches, coughing, and dread, since we didn't know how close the source of the smoke was. 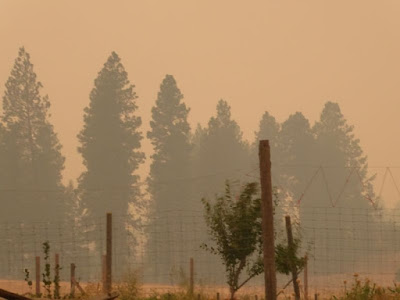 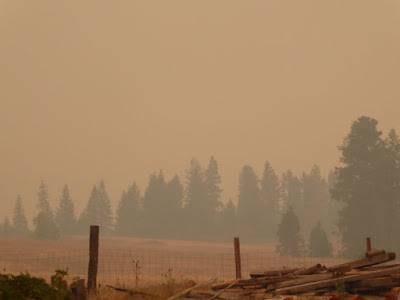 The following morning the bulk of the smoke was gone, but a bleary sun rose through choked skies. 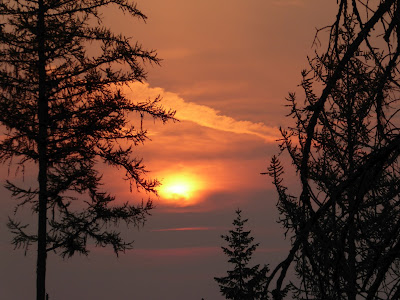 Yet despite the concerns and the smoke, temperatures have been creeping down over the last couple weeks, from the 90s into the 80s.

On Tuesday, we suddenly got slammed with a dust storm -- high winds and billowing dust kicking up in sheets. 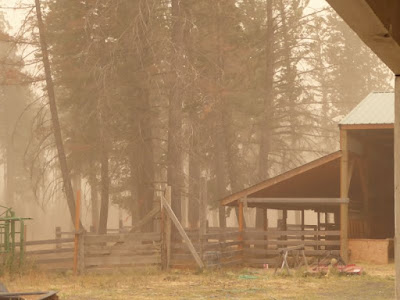 The chickens went squawking and running for their coop. The wind was blowing so hard it tipped poor little Smoky over and she rolled once or twice before getting back on her feet. 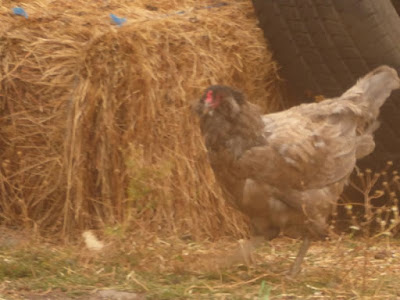 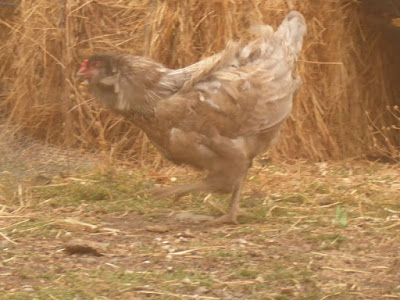 Can you see the trees in this photo? 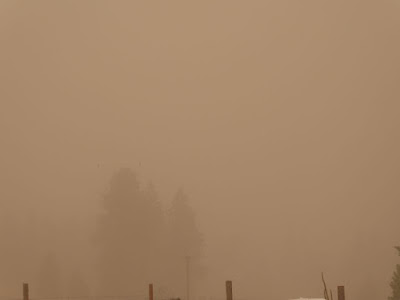 Younger Daughter and I stepped outside into the wind for the thirty seconds it took me to snap a few photos. We squinted but still got dust in our eyes, and by the time we came in our teeth were gritty.

Regionally, the dust resulted in some temporary road closures. Wind gusts were reported up to 60 mph.

The trees in our backyard were whipping. 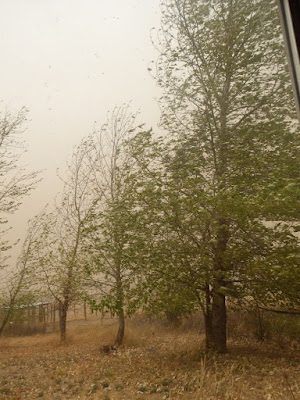 And then, rather abruptly, things calmed down. Not just the dust and the wind, but the weather in general. Yesterday was delightfully cool and mostly cloudy. The air was clear. A neighbor who was in town reported people walking on the sidewalks with a bounce in their step and smiles on their faces.

Not surprisingly, the dust storm knocked a lot of nearly-ripe pears off the tree. Ah well, I would have been picking them within a couple of weeks anyway. 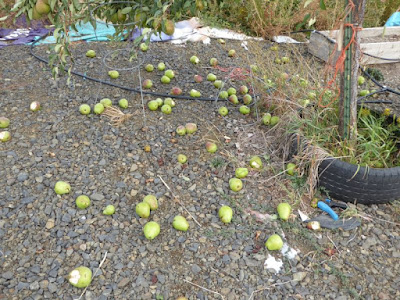 I needed to gather the windfall fruit as soon as possible, because anything on the ground was subject to getting munched by chipmunks... 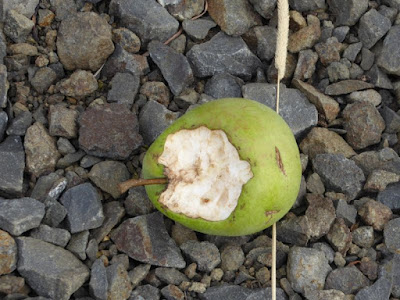 ...then chewed by wasps. 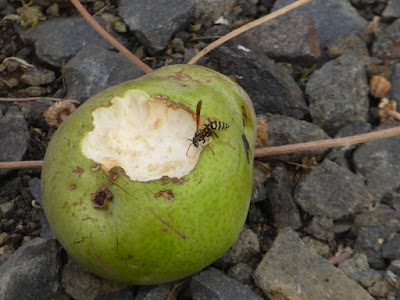 This is what happens to pears left on the ground for a week. 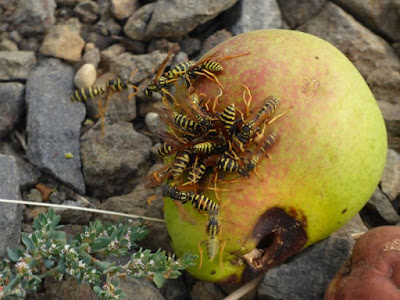 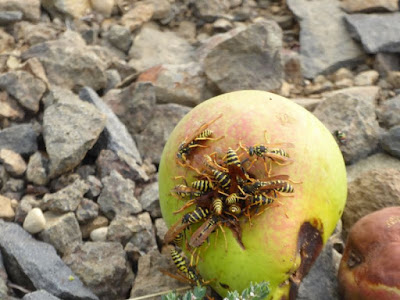 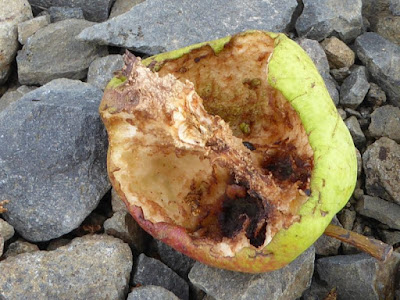 I used the boxes the peaches came in to collect the pears. I didn't weigh them, but I'm guesstimating I picked up about 35 lbs. or so. I brought them into the house to ripen for a week or two before I can them. 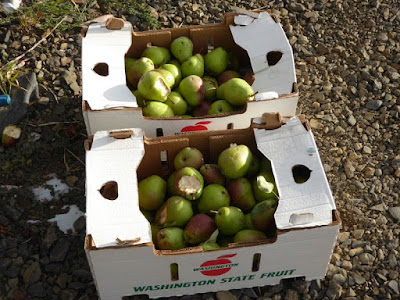 There's still a fair bit of fruit on the tree (notably on the branches facing away from the prevailing wind), so I'll let those continue to mature and pick them in mid or late September. 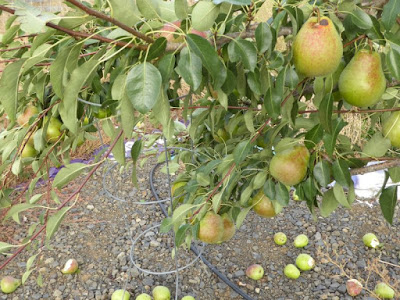 The weather in the foreseeable future is pleasant, a vast relief from the hellish summer.

No doubt it's an even vaster relief to the hardworking firemen and women battling flames in the mountains.
Posted by Patrice Lewis at 3:05 AM