A picture is worth a thousand tasks 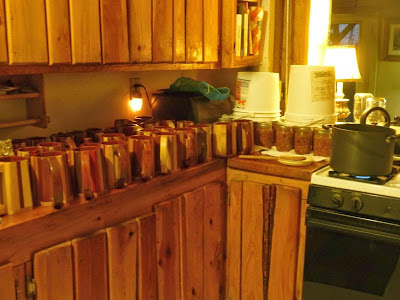 This photo was taken about 9 pm and represents the conclusion of a thousand tasks that occupied our day.

Second, those are a bunch of tankards on the counter we're just about to card and pack for a shipment going out tomorrow. Don's been working on these all week long.

Third, that's 18 pints of canned pinto beans on the right. I soaked them overnight, simmered them for a few hours this morning, and canned them this afternoon.

Fourth, those two white upended buckets on top the jars of beans are cleaned milk buckets, because I'm milking Polly again. This is because we butchered three animals on Monday, including Polly's yearling steer calf Chuck. We castrated Chuck when he was a few days old, but apparently we didn't get "everything." He suddenly started acting like a bull. The last thing we need is another bull around the place, so when we called the butchers to dispatch two other animals, we threw Chuck in there as well. However now Polly needs to be milked twice a day, so I'm back at it.

Fifth, the pot on the stove is frying down bacon bits. I had accumulated a lot of el-cheapo bacon ends in the chest freezer. With the meat due back from the butchers in a couple of weeks, plus the fact that we now have a smaller chest freezer, space is at a premium and I need to clean it out as much as possible. I've been meaning to can up bacon bits anyway, but it takes a long time to fry everything down and drain off the fat. That pot on the stove is the third batch I've fried down today.

Bottom line: the photo above represents a LOT of work. Don and I are both wiped. I'm off to bed. Good night.
Posted by Patrice Lewis at 9:18 PM