A couple days ago, I got a comment from a gentleman named Myles who was concerned about my husband. He wrote:

I've been watching your blog for some years now. I've been to Portland with you four or five times meeting your friends and seeing your favorite place for coffee and the bookstore that you frequent right before your trip back home. I've also been with you on your book tours and to the preparedness expos. Just a few days ago I went along while you went off to the fair with your daughter(s). However, from a man's standpoint, what about Don? Does the poor man work constantly? The only break that I've seen him get is when you went canoeing for a date at the local lake. I even knows that he self catheters and that he's always there for you. My question is does he ever get out? Does he get a chance to hang with the guys? What's he do for fun other than build, repair or make beer steins?

I thought this was awfully sweet of Myles to be concerned and figured I'd take this chance to explain further about my dear husband.

One of the things Don and I had to accept when we began developing a farm is that most trips must be taken separately, because someone must always be home. So when I go to Portland or other road trips, I'm by myself (or with our daughters) and Don stays home. But here's the thing: Don also takes trips, but I don't mention them on the blog because I don't like advertising to the world that I'm home by myself. The occasional sales trip (or pleasure trip) is just as nice a break for him as it is for me, even though we can't enjoy those trips together.

Don works his tail off to support us and I'm more grateful than I can say for what he does. Thankfully the most intense work is seasonal (summer and early fall), so when our season ends, so does much of the tankard work. Fairs fall during this busy time, so if we attend at all, it's usually only one or the other of us. Don isn't the shutterbug I am, so he doesn't take pictures of everything he does.

Our slow season is coming up shortly. During these months our income drops, but we very much look forward to our slow season to reconnect, take things easier, catch up on neglected chores, work on projects around the farm, and batten things down before winter.

(A quick note about his self-cathetering: this references a year and a half ago when Don was hospitalized for three days with acute kidney failure and other issues. The culprit turned out to be a grossly enlarged prostate. He had outpatient surgery a couple of months later and has been right as rain ever since, thank the good Lord above.)

Don is a member of an organization in a nearby town that meets twice a month. He's active in this organization, not only as a member but also on several committees. He enjoys volunteering his time toward charitable events they put on, or helping with whatever functions take place. Here he is, for example, in the organization's Drug Awareness Booth at a small local fair: 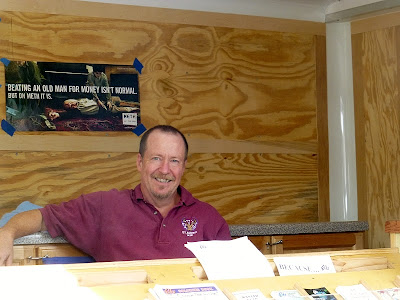 We have weekly potlucks with our neighbors, a lovely group of people that we just plain like spending time with.

One of the reasons Don and I are such a good match is we enjoy many of the same home-centered activities. When we're not working on tankards, we do stuff around the house and farm, or read, or walk, or otherwise enjoy each other's company. We're blessed beyond measure to be so compatible.

To some people this may seem like a boring life, but it's a life we thrive on. We enjoy quietness, solitude, and routine. We enjoy the seasonal changes on the farm and the chores and projects each season brings. We each have friends but we also cleave together. Life doesn't get much better than this, frankly. 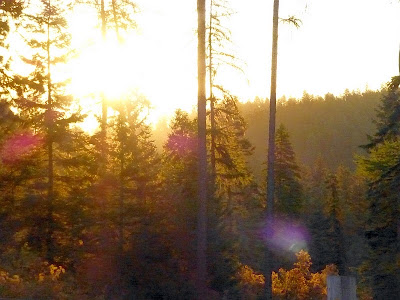 So while Myles can rest assured that Don isn't being a thankless work horse, he does have an excellent point: I should include non-working references to my dear spouse more frequently. Thank you, Myles, for bringing this up!

It's delightful to know that there are people out there who show such concern for others. Thank you! But here's the thing: my life has been a series of adventures in places all over the world. The concept of stopping to smell the roses would have never occurred to me back then. I wasn't always a good man (if I can even claim that title today). It's because I was so blessed to have met and then shared my life with the best person I know that I am probably alive today.

God (whom I had little time for back in the day) has graced me far more than I can ever have deserved. And I have to say, although I would never have believed I'd say such a thing, that leaving the farm, even for my occasional reunions with old friends, becomes less attractive with each passing year. I am just about as satisfied a man as I have ever met. The last and greatest adventure is still ahead of me. I'm in no hurry to begin it, but I have no fear of it. I expect it will even beat the farm.

Again thanks for your well wishes.
Posted by Patrice Lewis at 11:26 AM

Email ThisBlogThis!Share to TwitterShare to FacebookShare to Pinterest
Labels: husband