A whole different set of vices

Recently I read a book called Give It Up! My Year of Learning to Live Better with Less by Mary Carlomagno on how she tried to simplify her life by giving up a particular vice every month. 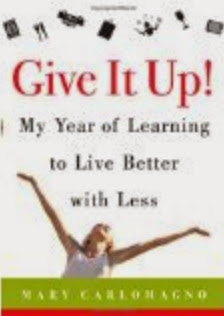 It was a mildly interesting book, but not one I could particularly relate to. It took me awhile to figure out why.

The premise of the book is to give up one vice per month (and then resume the vice the next month). Here's what the author gave up:

The reason I couldn't relate very much is because I don't suffer from any of these vices.

I should explain that at the time the book was written, the author was a single woman living in Jersey and working in New York City. She was an admitted partyer and felt the need to reduce some of the things that were costing her a lot in terms of time, money, and health.

Now it's hard to compare a single urban childless woman to a married rural woman with kids, but nonetheless here's why I couldn't relate to the author's particular vices:

Alcohol -- I have a glass of wine about four times a week. I drink boxed wine. Who can afford bar drinks?
Shopping -- A minimum of an hour's drive away, no spare money, and most of our shopping is done at thrift stores. Besides, I hate shopping.
Elevators -- Virtually unknown in rural areas. I'm lucky to see the inside of an elevator twice a year.
Newspapers -- We don't subscribe to any.
Cell phones -- Even when I was in high school, I hated talking on the phone. Same now. I own a very basic cell phone model and have it on only when traveling. It's not a "smart" phone and even though it will take photos or allow texting, I don't have the faintest idea how to use those features. In short, I use my cell phone perhaps five or six times a month.
Dining out -- Rarely do it. Hate spending the money. Plus nice restaurants are an hour's drive away.
Television -- No reception.
Taxis -- I've been in a taxi once in my life, around 1984 or so.
Coffee -- I hate it. Can't get it down at all. I can't stand coffee ice cream, coffee candies, or any other coffee-flavored concoction. Yuck. (Tea is a different animal.)
Cursing -- I used to let an occasional four-letter word slip, but I've made a conscious effort to clean up my language in the last five years. I have kids, after all.
Chocolate -- Not my favorite flavor. Given a choice between chocolate cake and yellow cake, I'll take the yellow every time.
Multitasking -- I don't think my version of multitasking is the same as the author's.

I hope this doesn't imply that I'm flawless and without vices because that's FAR from true. It's just that my vices differ from the author's, in large part because our lifestyles are polar opposites. I don't care for chocolate but I love sweets (as my waistline will attest). We don't have television reception but I'm on the computer more than I should be.

So this got me thinking -- since rural people face different issues than urban folks, what are twelve vices we could give up over the course of a year?
Posted by Patrice Lewis at 7:37 PM