I try to plan Thanksgiving so most of the cooking is done on Wednesday rather than Thursday. No sense wearing myself out on a day when I'd like to enjoy our company and our blessings!

So, yesterday I cooked. And baked. And cooked and baked some more.

Here's what our feast will include this year:

The top part of the list (turkey, gravy, potatoes, beans, rolls) will be made today, Thanksgiving. Everything else I made yesterday.

I started with cheesecake. I use a recipe that's been handed down in our family. 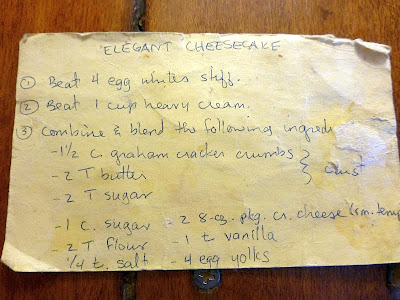 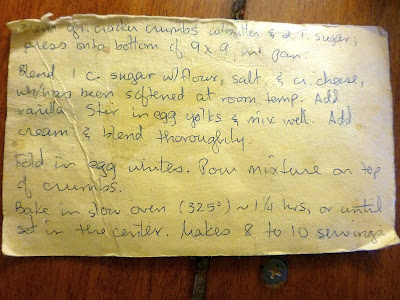 The first thing to do is whip the egg whites, since the beater can't have any remnant of fat on it (from, say, whipping cream). So egg whites come first. Here I separated the whites from the yolks. (The jars of chicken meat in the back are from canning chicken -- more on that in an upcoming blog post.) 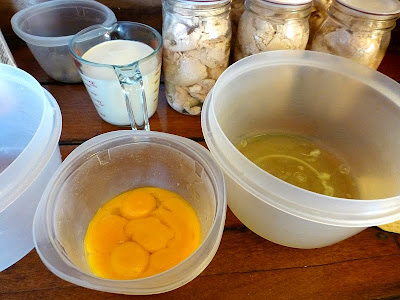 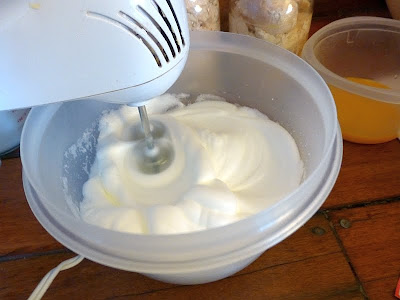 Typical baking chaos. The graham cracker crusts are already in the baking dishes, and I've mixed the rest of the cheesecake ingredients in a large bowl. Last step is to fold in the whipped egg whites. 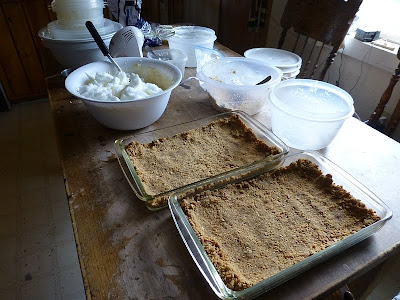 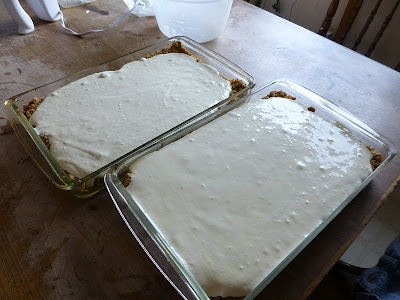 Cheesecake must be baked very slowly and carefully, and it takes a long time (another excellent reason to make it the day before Thanksgiving, when the oven is occupied). About halfway through baking, I lay aluminum foil loosely on top so the tops won't burn while the insides continue to bake. 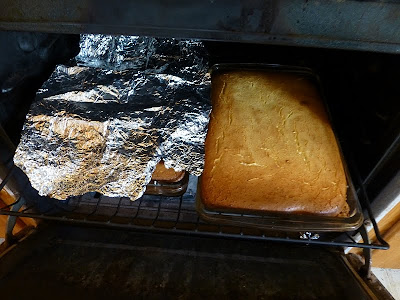 A quick batch of dishes, trying to keep the chaos to a minimum... 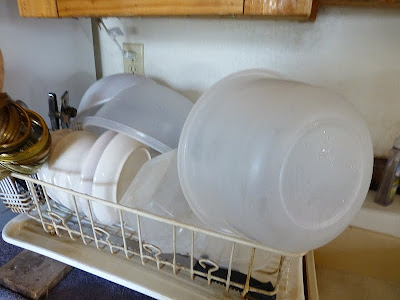 Next up, my personal favorite: wild rice stuffing. No one else in my family likes it, so this is my once-a-year indulgence. 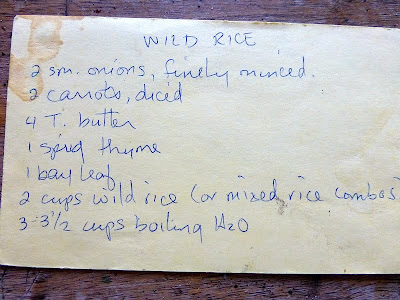 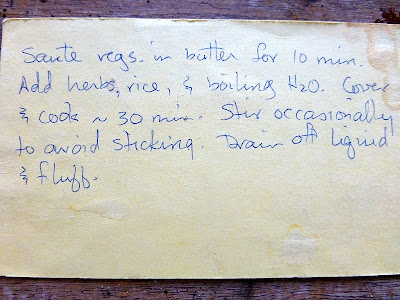 I can load it with all the onions I want and no one objects, LOL. 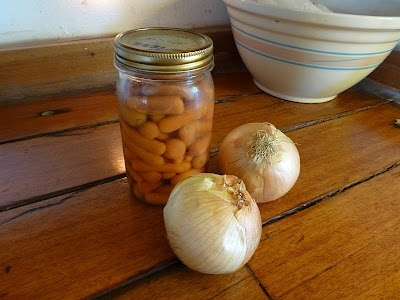 I dice the onions and carrots, and sauté them in butter. 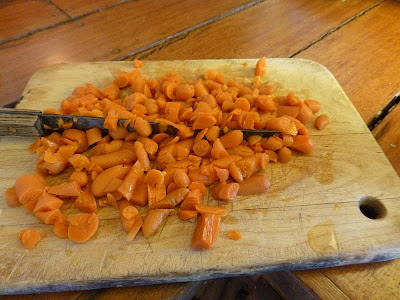 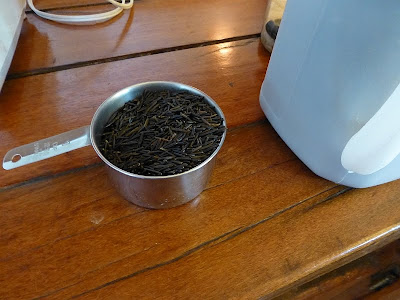 At this point it looks like little more than rice soup. 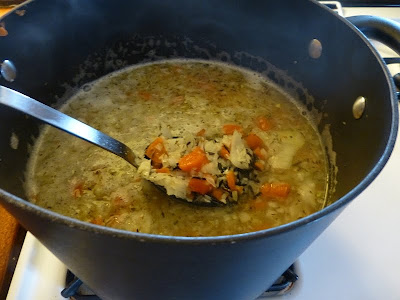 But a gentle simmering turns it into a divine stuffing. Turkey just isn't the same without wild rice stuffing, IMHO. 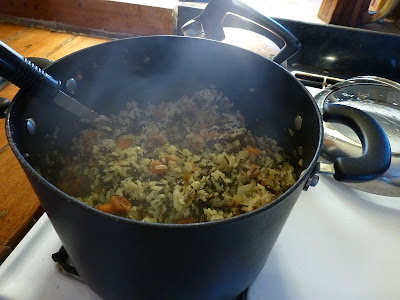 However for the more conventional-minded family members (namely, everyone else), I also make traditional bread stuffing. This is the easiest stuff in the world to make. 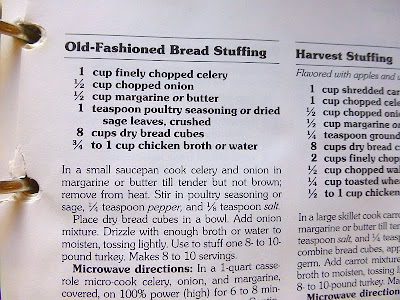 I start with a fresh loaf of wheat bread, our standard. 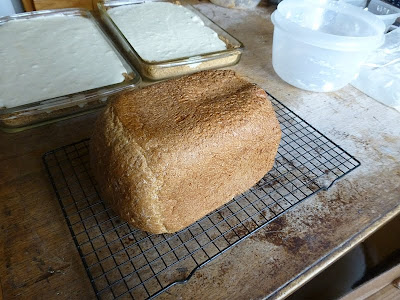 We slice, then tear the slices into small pieces. 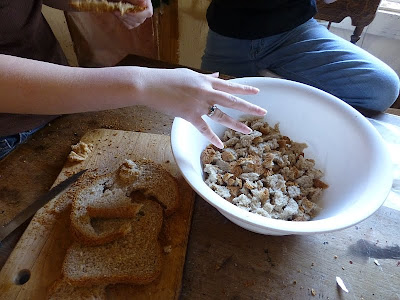 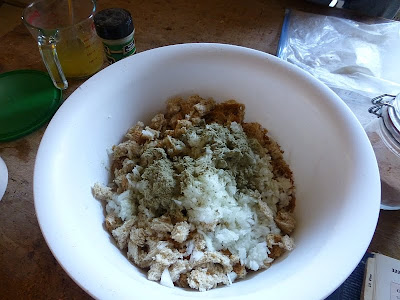 At this stage, Younger Daughter usually absconds with a cupful. She prefers the "raw" bread stuffing to the baked. After she took her share, I covered the stuffing with foil and baked. 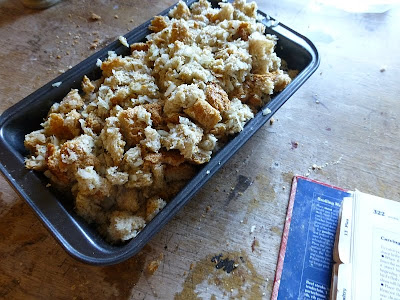 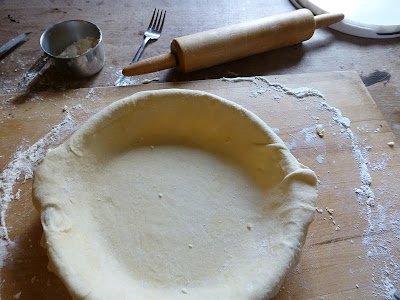 I mixed the blueberries with flour and sugar... 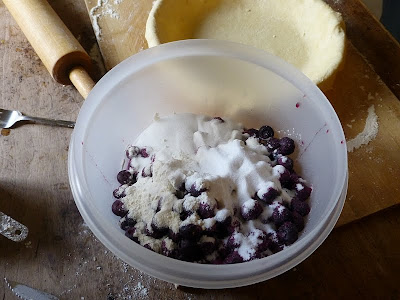 ...and poured them into the shell. Top with a second crust, and it's ready to bake. 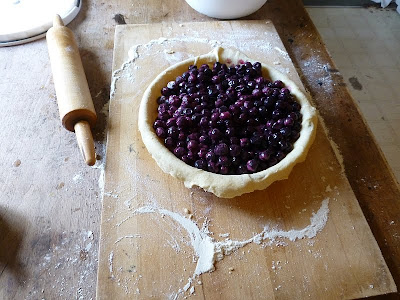 For the chocolate cream pie, I first baked the thawed single-crust pie shell. Then I made the filling. 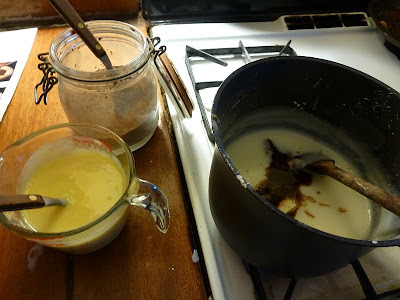 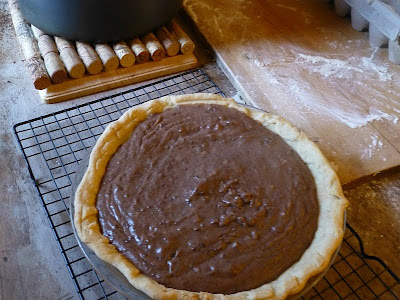 The loot by the end of the day: two cheesecakes, two pies, bread stuffing, and wild rice stuffing. Lots of work, but it would have been literally impossible to get everything done if I had waited until Thanksgiving Day to get started. 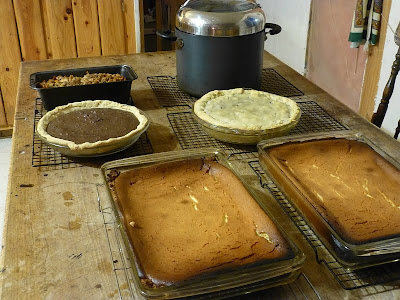 A happy and blessed Thanksgiving to all my dear readers as you enjoy your own celebration!
Posted by Patrice Lewis at 7:56 AM

Email ThisBlogThis!Share to TwitterShare to FacebookShare to Pinterest
Labels: Thanksgiving