Picking up the pieces on the East Coast

We've been following with great concern the situation on the East Coast in the aftermath of Hurricane Sandy. In conjunction with a magazine article I recently submitted, I spoke with a woman in New York City yesterday. After we finished talking business, I asked her how she had weathered the storm. The only way to describe her reaction was "traumatized" -- and she was one of the lucky ones. She was staying with some friends, she had food and water, and she was able to talk business. 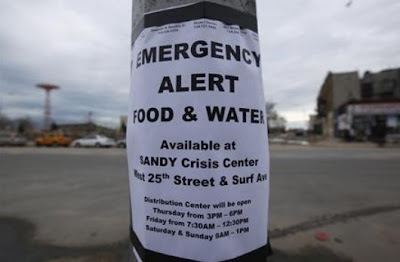 There are so many displaced people who are cold and hungry, and they all need prayers as well as donations. Please respond to their needs.

Our friends at Pantry Paratus knows someone in the Washington D.C. area who visited a Walmart on Monday, the day the storm hit. He documented some things that were still abundant on the shelves that people overlooked, and which could be useful in emergency conditions.

They put up a blog post (here) documenting what was still available.

While it's too late for those on the Eastern seaboard to prepare for Sandy, it's not to late for other folks to prepare for emergencies in general. Hint hint!
Posted by Patrice Lewis at 8:06 AM