I always knew I was different.... 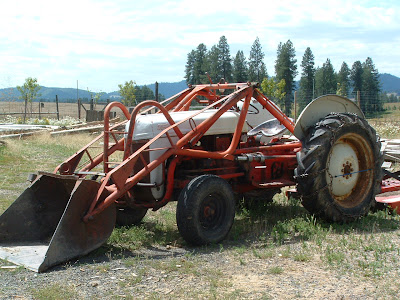 So I'm driving into the city with my girls last week. It's haying season all over this area, and everywhere we went we saw tidy swathes of hay in broad fields, waiting to be baled.

I noticed a small tractor sitting alone in a pasture, much different than the massive tractors used by commercial farmers. In fact, it was similar to our own beloved 1949 Ford 8N tractor. But what caught my eye was the pretty little 8N-sized baler with a PTO attachment behind it.

"Look at that baler!" I exclaimed. "That's what we need!"

There was a brief but pointed silence from my 13-year-old daughter. "Mom," she said at least, "do you realize most women would be admiring a pretty dress or necklace, not a baler?"

But it really was a sweet little baler. Just what we need.
Posted by Patrice Lewis at 1:21 PM