Ding dong, the hay is stacked! 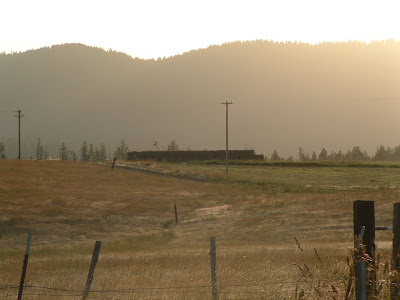 Our string of miracles continues!

We were wondering how to get our hay stacked between rainstorms. The one neighbor who has a tractor big enough to lift thousand-pound bales was working twelve-hour days, seven days a week in a town an hour south of us (meaning, he was putting in fourteen-plus-hour days). Ironically, he had been hired to...put up hay on a huge ranch.

In came the rain, which interrupted the haying, which gave our neighbor an unexpected two days off, which meant he had time to stack our hay today! Hooray! 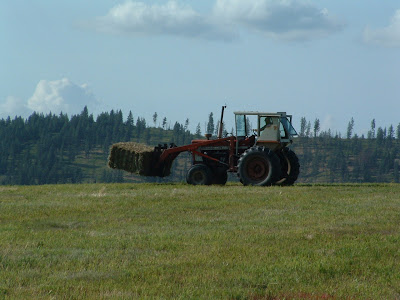 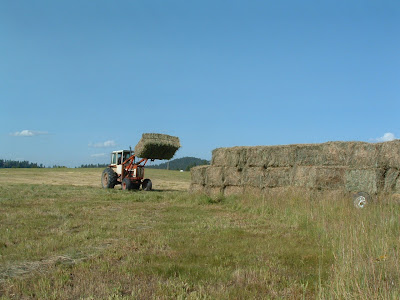 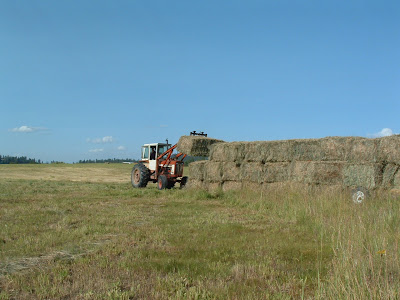 We got 24 tons, about a ton per acre, which is a really lousy output for a fertilized field. Hay production is down all over the Inland Empire (as they call this section of the northwest). But it will keep our livestock comfortably over the winter, with a little to spare for friends who do us favors...like our neighbor. He got two tons in thanks for stacking our hay.

Last winter's tarp can pull duty for another winter, but it's not nearly long enough to tarp the entire line. We have rain coming in on Wednesday, so tomorrow I'll get another tarp to finish covering the hay. Later in the summer our neighbor will move half this hay - twelve tons - into our barn. But neither he nor we have time to do that right now, between rain and work.

For now, we're giving thanks for the string of minor miracles (neighbors and friends with BIG equipment) that gave us hay for the winter.
Posted by Patrice Lewis at 9:47 PM