The eagle has landed 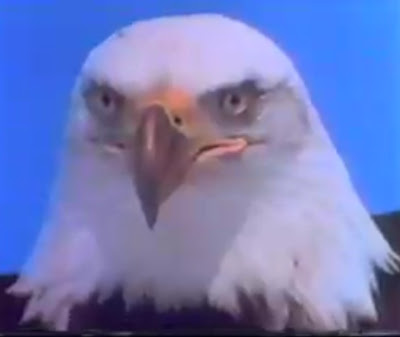 Here in north Idaho, near the shores of Lake Coeur d'Alene, the American Bald Eagle is a common sight. Though we see them frequently, they still send a thrill through my heart. We once saw seven birds in one tree. Magnificent.

Here's a video clip of an eagle named "Challenger" who is a human-imprinted eagle and thus cannot be released to the wild. He was blown from his nest in a storm in Louisiana in the late 1980's and raised by well-meaning people. Later turned over to the American Eagle Foundation, he is used for public education to raise awareness about bald eagles.

Challenger is trained to do free-flying during the American anthem in sports stadiums, arenas, even ballrooms.

Many years ago I volunteered at a raptor rehabilitation facility and got to handle birds of prey ranging in size from saw-whet owls (the only bird for which I didn't need a leather glove) to (oof) golden eagles. The most common bird I handled were great-horned owls. But a bald eagle? No. What a thrill that would have been.

Then again, maybe not. The only raptors at the center were injured birds rescued from the wild. I wouldn't wish that on any raptor.
Posted by Patrice Lewis at 8:29 AM

Email ThisBlogThis!Share to TwitterShare to FacebookShare to Pinterest
Labels: eagles