Today was butchering day for our fourteen Cornish-cross chickens.

Cornish-crosses, for those who don’t know, are meat birds. They gain weight with a speed and seriousness awesome to behold. While the rest of our chicks were growing at a regular rate, our Cornish-crosses were doubling and tripling in size. They were always gathered at the feed trough, gobbling food as fast as possible and converting it into meat. They were not quite two months old (born May 20) on their butchering day.

Sorry the photos aren’t the clearest – they kept moving. But these birds are the same age. Obviously the meat birds are the white ones. 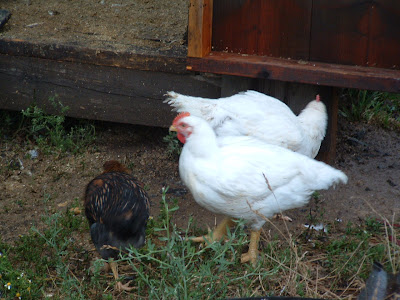 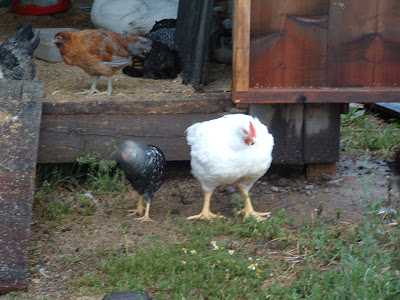 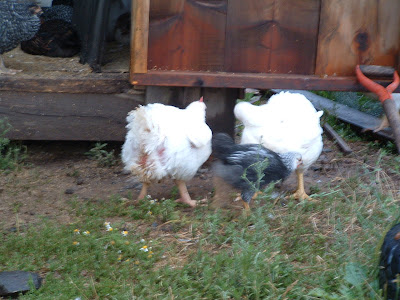 They started out as cute little yellow balls of fluff, and soon metamorphosed into huge weird freaky mutant chickens nearly incapable of standing on their own two legs. Literally. In fact, one bird dislocated both her legs last week. They simply buckled under her own weight. It was grotesque.

We had plans to butcher the flock at the end of August, when we had a breather in our schedule. Both Don and I are inept enough at butchering that we both needed to be involved. But when this chicken dislocated her legs and resorted to flopping around the coop, we knew we had to butcher them sooner as an act of mercy. Unfortunately we’re in the throes of our busy season, and two back-to-back business trips meant we had to postpone butchering until early August at the soonest.

So we got wind of a lady who does chicken butchering, and I finally was able to track her down. She is located in Athol, nearly a two-hour drive north, and she said she could squeeze me in on Saturday morning if I could be there by 9 am.

So this morning I got up at 4:30, drank a cup of tea, caught up on the internet news, milked the cow, did the barn chores, and by 6:45 am had the huge weird freaky mutant chickens stuffed in a cage (with overflow chickens in a box) in the car.

Driving for nearly two hours with fourteen huge weird freaky mutant chickens in the car isn’t a whole lotta fun, but I got to this lady’s house (well, barn) and she had the dirty deed done in just a little over an hour. I wished I’d had the camera so I could document all the steps for you, my loyal readers. Then again, maybe it’s good I didn’t have the camera after all.

Some might argue that we whimped out by not butchering the chickens ourselves. On the other hand, this lady charged – drum roll, please – a whopping $2.25 per bird to butcher, and had all fourteen done in about 1.25 hours. Left to our inept hands, it would have taken my husband and me all day to butcher fourteen huge weird freaky mutant chickens. So despite the long drive, I consider it time and money well spent. Now we have fourteen fat birds in the freezer, ranging from 5.5 to 6.5 lbs each.

But if you wanted to insist that we whimped out on butchering, I probably wouldn’t argue too much. Not my favorite thing to do, butchering chickens. Though, let the record show, I can do it.
Posted by Patrice Lewis at 11:11 PM