A trip to the mall 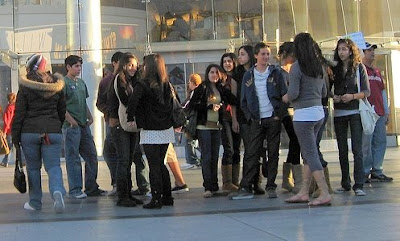 I had errands in the city this past week on a day when I didn’t have to rush home for anything. In looking at a map to determine the most efficient route to complete my errands, I noticed I would be passing right by a large mall.

“Hey girls!” I announced to my kids. “Would you like to walk around a mall this afternoon?”

For the record, we haven’t set foot inside a mall in four or five years. Why should we? There’s nothing we would buy (most of our clothing and household goods are purchased second-hand) and the nearest mall is an hour and a half drive away. So this was viewed as a huge treat by my girls. Besides, I thought it would be interesting to stop in and see how malls have changed.

Well it was interesting, all right, but not because of the stores. In fact, it turned into a fascinating sociological and anthropological experience.

Remember this was early summer, on a Tuesday afternoon, so the mall was full of… teenagers.

Believe it or not, my girls don’t see a lot of teenagers outside our home town, at least not in large numbers. Urban teens are a whole different species than rural teens. There wasn’t a cowboy hat – and even very little denim – to be seen.

Now understand, I have a teen. And I knew there would be teens at the mall. A good part of the reason I wanted my kids to go to this mall was… well, to show my teen what’s out there. What she’s missing. What her publicly-schooled peers are like. What they’re wearing, how they’re acting, what makeup they have on, what the boys are like, that kind of thing.

And please note, the kids at this mall were not bad kids. Far from it. They were quiet and well-behaved, walking around in groups and not causing any trouble. They shopped. They ate. They hung out. No big deal.

But my kids were shocked nonetheless. To them, it was like watching a circus freak show. “Look at that one!” one or the other daughter would whisper, pointing discretely. “Oh my gosh, look at that one!” Spiked and/or unnaturally colored hair. Tattoos. Body piercings. Fashions. Language.

It reminded me of an incident that happened when my oldest was about eight (in fact, it was probably one of the last times we were in this particular mall). Coming out of a Barnes & Noble, my oldest tugged at my sleeve until I leaned down. “Mom!” she whispered, pointing. “Is THAT what you don’t want me looking like when I’m a teenager?”

I looked at a fourteen-year-old human Bratz doll walking by, complete with fishnet stockings and makeup that must have been applied with a trowel. I whispered back “Yes!”, pleased that she understood at so tender an age what is considered inappropriate in our family.

So now that my oldest is thirteen and taking an interest in her appearance, I am so so so so so so so happy we live in the country and are homeschooling, and that her peers – even the publicly-schooled ones – don’t look like Bratz dolls and hang out at the mall.

Phew.
Posted by Patrice Lewis at 8:31 AM