Until a few days ago, October was a very dry month for us. Thankfully some much-needed and very welcome rain is moving in. 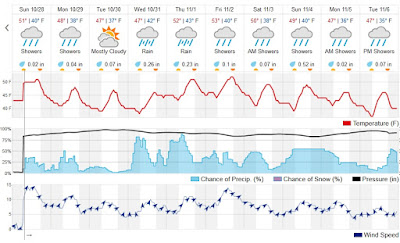 While it's delightful to walk outside and sniff the fresh moist ground, we weren't idle during the dry weeks. Among other chores, we focused a lot on firewood, a chief preoccupation for many people this time of year.

Summer before last, we had a neighbor come in with some huge equipment and clear out a lot of dead trees from the wooded side of our property. 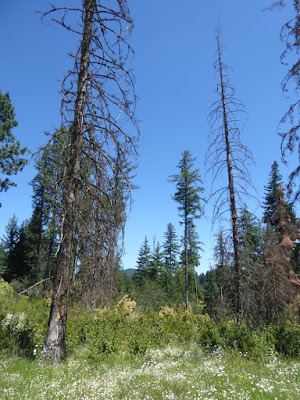 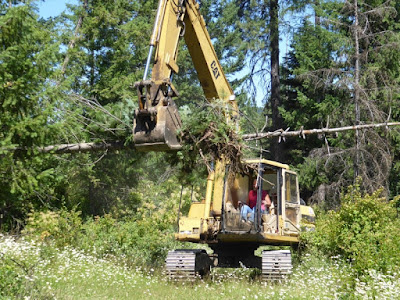 He piled the burnable debris in big burn piles and put the salvageable logs in another pile just below our corral. 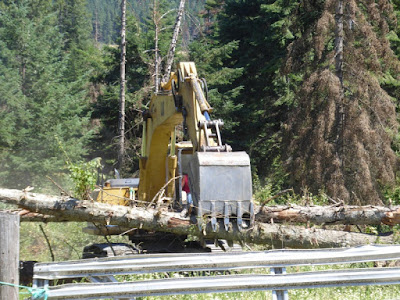 We've been harvesting firewood off that pile ever since. In the last few weeks, Don's worked hard to cut it all into rounds. 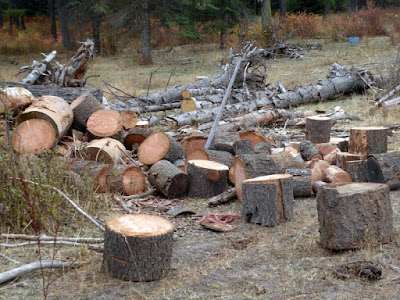 When enough rounds are cut, we load them into a small trailer hitched to the tractor bucket, and bring them up into the driveway to split. 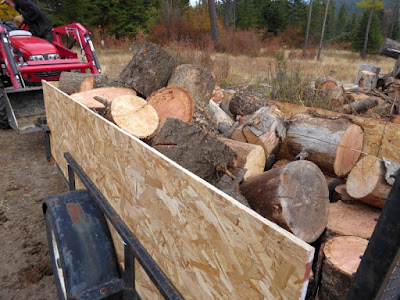 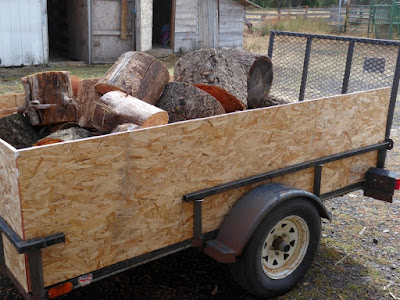 We've been repeating this process for several weeks now. 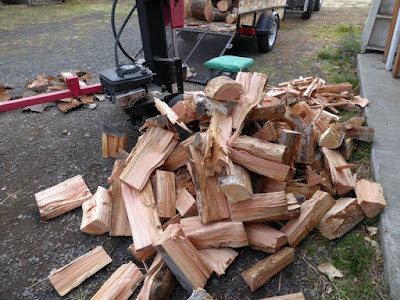 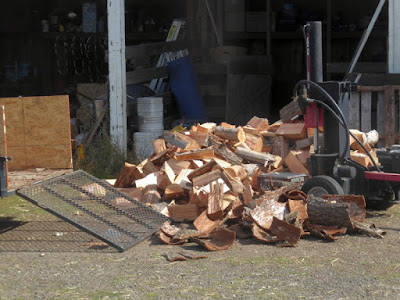 We're stacking some of the split wood in the barn: 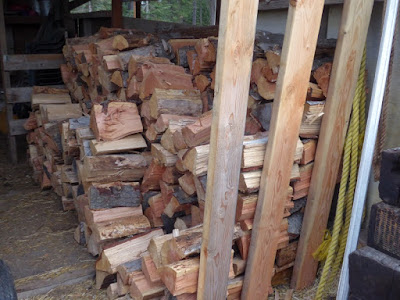 We're stacking some on the side porch: 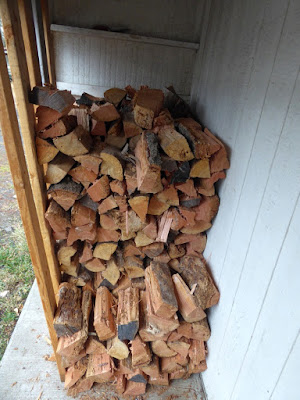 And we're stacking some on the front porch: 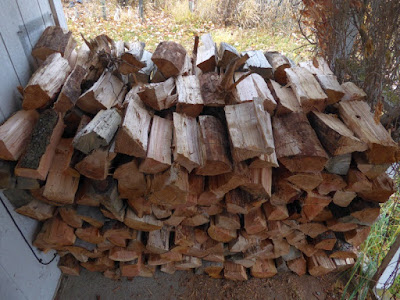 We have room to stack lots more in all three locations, especially since we moved the kindling box from the front porch to the side porch... 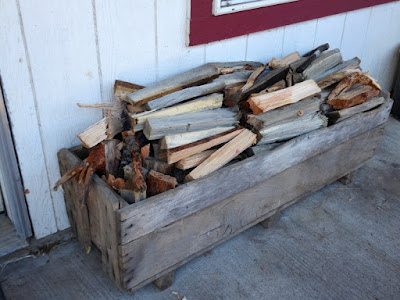 ...giving us more room on the front porch. 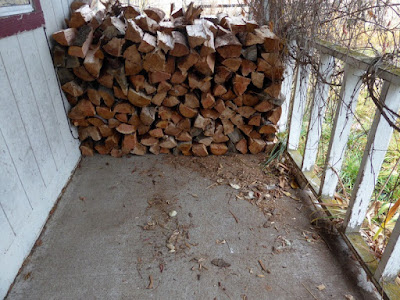 We always keep the hatchet in the kindling box for splitting kindling as needed. 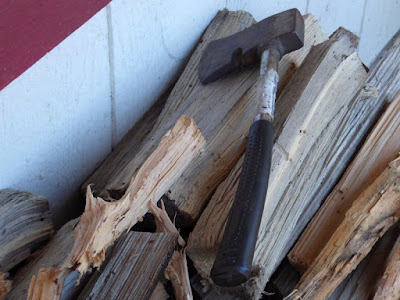 A funny thing happened yesterday while Don was cutting rounds below the corral. He had on headphones and was listening to a recording of some Christmas choral music (he's participating in a performance in a few weeks), and was singing the bass vocals at the top of his lungs. I was in the house so I couldn't hear him -- but suddenly I saw all seven cows gallop madly across the field and disappear behind the barn. Don came in chuckling a few minutes later and told me all seven animals had gathered in a circle around him as he sung, apparently fascinated by the music. "Let's see if they'll do it again," I said as I grabbed the camera.

The animals weren't quite as cooperative the second time round, but they were still pretty funny. 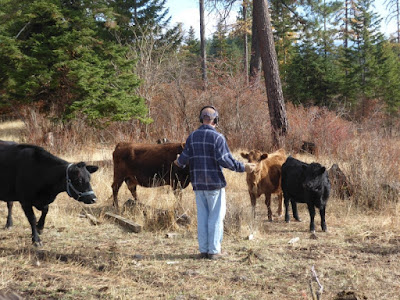 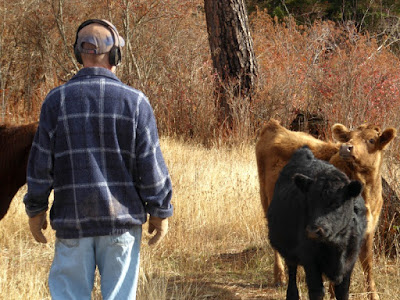 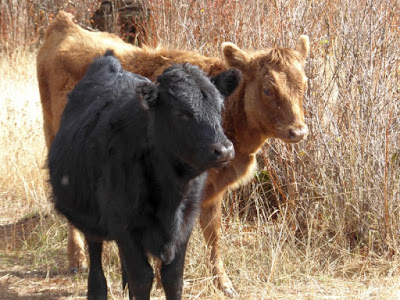 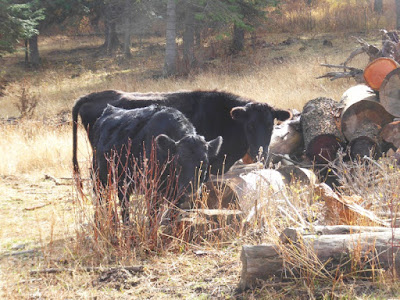 (I think this is known as "singing 'til the cows come home.")

Even our neighbor's cat stopped to listen to the impromptu recital. 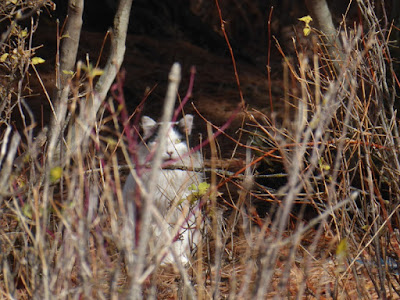 At least, until the cows spotted the poor kitty and went barreling over to investigate. 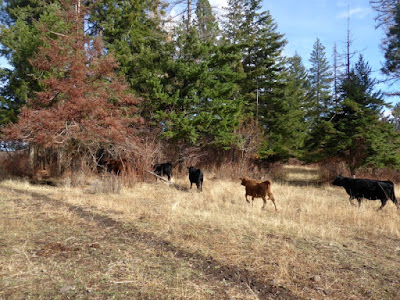 This hearkens back to an earlier blog post about music soothing the savage beast, when I sang to Amy while she was nursing the orphaned calf Anna.

And speaking of Anna, here she is double-dipping off her full sister, Pixie, who's also nursing her own calf Peggy. (Anna is the dark calf, Peggy is the dun calf mostly hidden behind Pixie.) 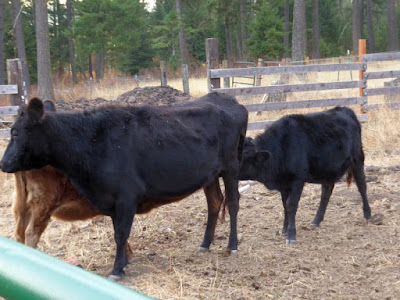 Despite the crushing loss of Polly earlier in the year, Anna has fended very well for herself, thanks to the generosity of other cows sharing their milk.

We had more rain due yesterday evening, so I decided to clean the chicken coop, a long-overdue task. 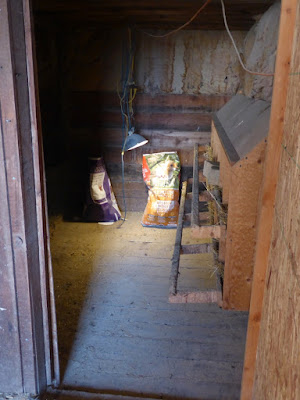 The cows watched me with great interest as I dumped the debris into the compost pile. 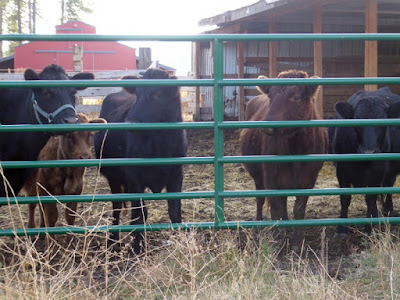 By the time I finished spreading fresh hay in the coop, it was dusky... 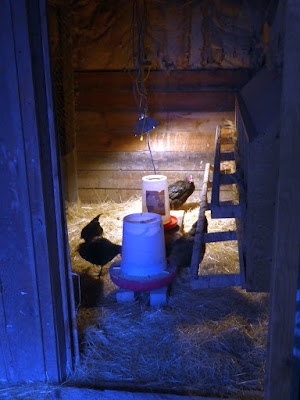 ...and the sky was getting thicker as clouds moved in. 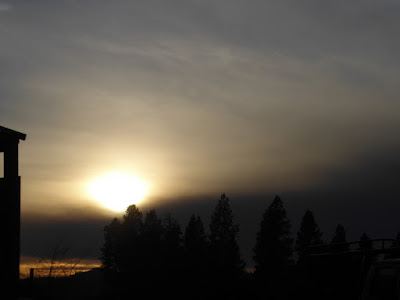 It was pleasant to lie in bed last night, listening to the rain on the roof and knowing the chickens had a comfortable cozy coop.

We have one recuperating bird in the coop. A week ago around 9 pm, I heard a commotion outside. I grabbed a flashlight and went out to find a great horned owl standing on the carcass of one of our young hens (from this summer's hatching). I chased off the owl and picked up the bleeding hen, and tucked her inside an inner pen in the coop to either live or die.

By the light of the flashlight, here's some of the blood from the hen... 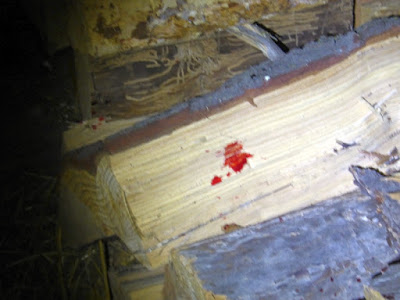 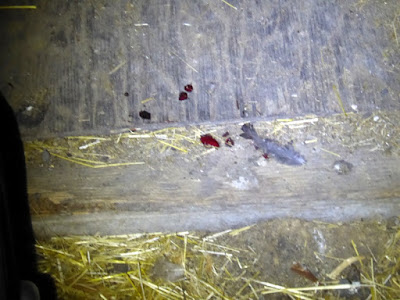 ...as well as some lost feathers. 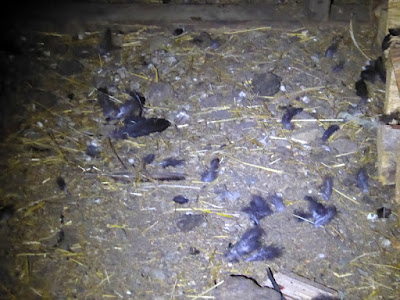 This little hen, along with some other birds, roosts in an overflow pen adjacent to the coop. The door to this pen isn't solid, so once in a while an owl will swoop in over the top of the door and drag out a chicken. Hooking a sheet over the door each evening works (if the owls can't see the chickens, they don't go in). I just hadn't started hooking the sheets up yet this fall. You can bet I am now.

Anyway, the young hen survived her encounter with the owl, and while she's now on her feet, she's wobbly. She might be fighting a leg fracture, I'm not sure. We'll keep her quiet and isolated in the pen for a couple more weeks and see how she does. 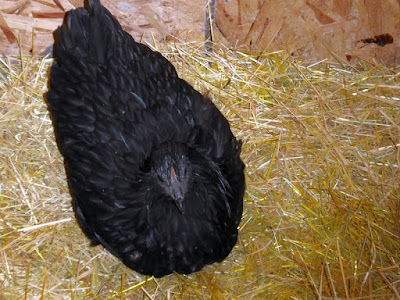 Anyway, that's some of what we've been up to lately as winter approaches.
Posted by Patrice Lewis at 1:36 PM