As preppers, if there's one thing I'm always on the lookout for, it's something inexpensive, hand-operated, and highly useful. I hit the jackpot on a spiffy, unheralded little product from my beloved Lehman's store: a mayonnaise maker.

As many of you may know, Don is a sandwich guy. As such, he goes through mayonnaise fairly fast. We normally buy it in gallon jugs from Costco or Cash'n'Carry. In the past, I've tried re-canning mayonnaise into pint jars and it was a total failure. Therefore we have something of a perpetual gallon-sized jug of mayonnaise taking up room in the fridge.

I've made homemade mayonnaise before. It requires the oil be titrated into the egg in a blender at a fairly slow and precise rate. I did it once and it was enough of a hassle that I never bothered repeating it.

But here was a little gizmo that promised to take the hassle out of making mayo. Intrigued, I tried it out. (The device is made in France, hence the ungrammatical description on the front of the box.) 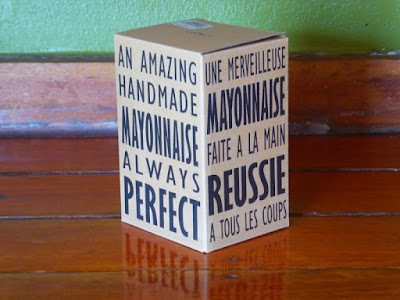 There is literally nothing to it: a lidded jar with markings on the side, and a silicone "mayo turber" that looks like a wrinkled rubber ball and acts as an agitator. 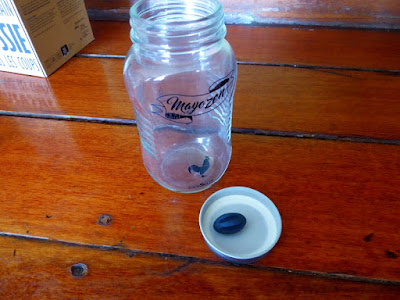 The directions (printed, literally, in 15 different languages) are very simple. Interestingly, this mayonnaise maker "should never be used by children under 15 years!" (exclamation point in the original) Um, why 15? That's a fairly advanced age for anyone to swallow the "mayo turber."

But whatever. Following the directions, I added an egg yolk, a tablespoon of mustard, and enough oil to reach the first line on the bottle. Then I dropped in the "mayo turber." 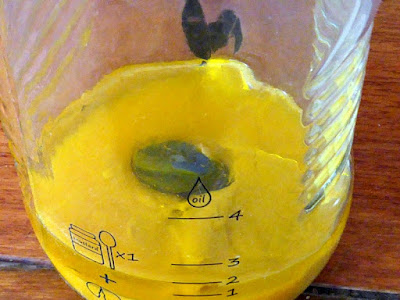 I put on the lid, shook the bottle for about 30 seconds, and added a bit more oil, and repeated this until I had reached the third line. 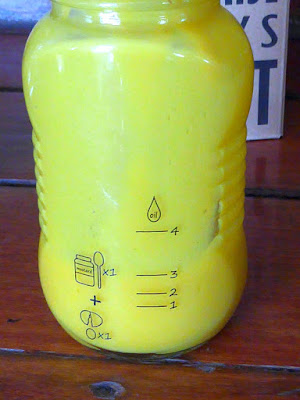 And it worked! Holy cow, it actually worked! The mayo comes out yellow (due to the egg yolk as well as the mustard), but it tastes like mayonnaise with a slight mustard tinge. 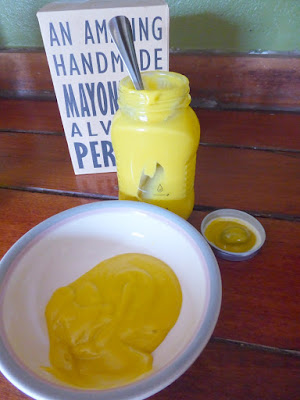 This silly little jar quickly morphed into a "Where have you been all my life?" item, ideal for the person who isn't fond of the preservatives found in store-bought mayo but up to this point the homemade stuff was too much of a hassle.

Like all homemade mayo, this version will not last as long in the fridge ... but conveniently, the jar makes just enough to enjoy for a few days before it's used up. And the mayo can be stored in the jar as well (just another convenience factor).

I'm going to start playing with recipes now: a whole egg instead of just the yolk, a little less mustard, maybe a different type of oil (I used olive oil), perhaps a touch of lemon juice....wow, this is gonna be fun.

I'm absurdly pleased with this little mayonnaise maker. I never thought to find something so simple, so useful, so inexpensive, and so easy to clean. Yep, definitely a keeper.
Posted by Patrice Lewis at 11:46 AM