As many of you remember, we lost our beloved Jersey Polly on April 22. She left behind her then-seven-week-old calf Anna (whom we have taken to referring to as Little Orphaned Anna). Anna refused to take a bottle, so in desperation we pressed Amy into nurse duty. 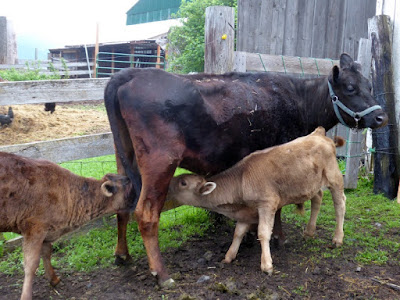 Well let me tell you, Amy hates acting as a nurse cow. She will grudgingly let Anna nurse, but only when her own calf Trooper is nursing. No Trooper, no Anna.

This is a photo of a cow who hates her job. She is literally glaring at me because I have her lead rope looped around a post to make her stand still long enough for Anna to fill her belly. 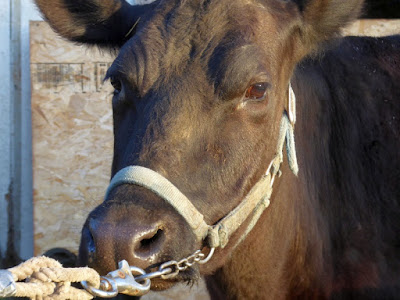 As I said, Amy hates it. She hates being brought into the corral when she's enjoying the fresh grass and the company of the other cows. She hates being forced to nurse a calf which isn't hers. We've learned to stand with her holding the lead rope while she's nursing the calves lest she chase Anna off prematurely. 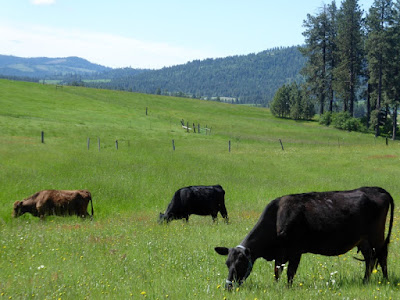 Over the last week or two, Amy has developed a nasty attitude when it comes time to bring her up from the pasture. She'll pull little tricks like just flat-out lying down and not getting up, no matter how much I tug on the lead rope or shout at her. In fact, escorting her up from the pasture has become a two-person job: I do the leading, and Don follows with a stick to whack her rump if she balks. She knows Don won't brook any temper tantrums, so she usually follows docilely enough when he's there. But if I'm solo, forget it.

Last night I tried to bring Amy up solo. No such luck. She balked, she laid down, she dragged her feet, she twisted and writhed on the lead rope. I was getting more and more frustrated and wished I could beat her to a pulp -- believe me, not something you want to do with a milk cow (or any cow). When I go out solo I bring the cell phone with me in case I need to call Don, who comes along armed with a stick. As soon as he gets close enough, Amy starts moving and gives no further trouble as I march her up to the corral.

Two days ago I was busy in the evening, so we fetched Amy up from the pasture, but this time Don stood with her on the lead rope while the calves nursed. And -- he sang to her.

"She had her eyes half-closed," he commented as he told me about it.

So yesterday evening, when I was ready to murder a cow, I did the same thing while I was holding her lead rope while she nursed the calves. I sang Amy a lullaby over and over. 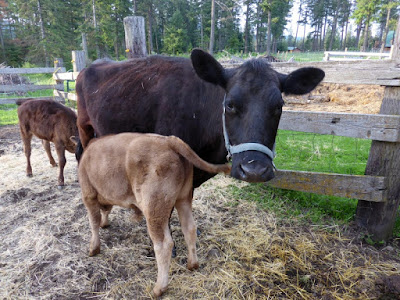 And it worked! She started chewing her cud, she didn't fight off Anna, and she generally calmed down.

And so did I. I no longer felt ready to murder Amy and I emerged from the corral feeling better. Music does indeed sooth savage beasts. Both of us.

We'll keep up this routine for another month at least. At that point Anna will be four months old, the youngest recommended age for weaning a calf, and we can release her to the rest of the herd. She'll doubtless be able to sneak milk from the other cows, who are usually pretty good-natured about double-dipping.