We've been keeping an eye on Polly, our Jersey, who was massively pregnant. We moved the cattle to the pasture a couple weeks ago, but we wanted to keep her close to the house as her time got near. So Sunday morning, I cleaned the barn... 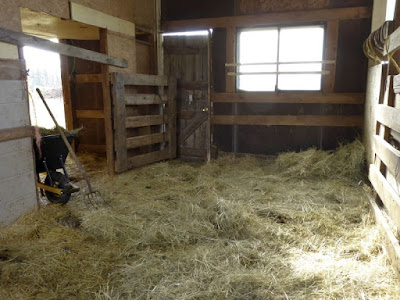 ...and pulled Polly inside. She wasn't overly pleased to get taken off all the fresh green grass. 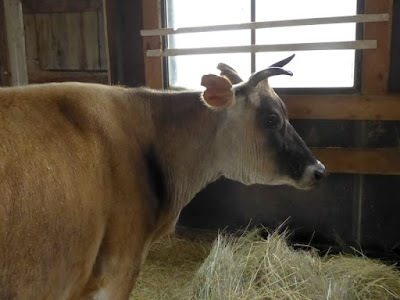 She's not confined just to the barn, of course. She has a spacious enclosed corral. But as I said, she wasn't too happy about moving.

Still, take a look at this udder, wildly bagged up. This is a sure indication birth will take place within a week or so. 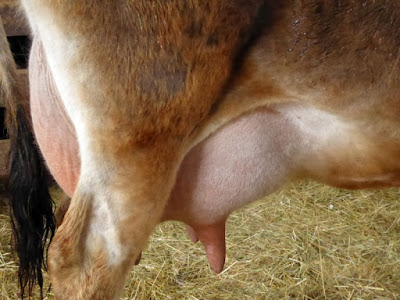 Deprived of her herd-mates, I tried to give her some extra attention, especially brushing. Polly loves to be brushed. Her head droops almost to the ground, her eyes close, and she just absorbs the sensations. It's quite funny.

Anyway, I checked her almost hourly, but days ticked by and nothing happened. 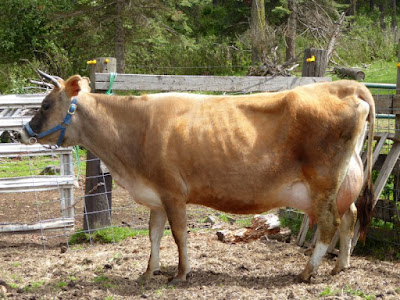 And the waiting game continued. 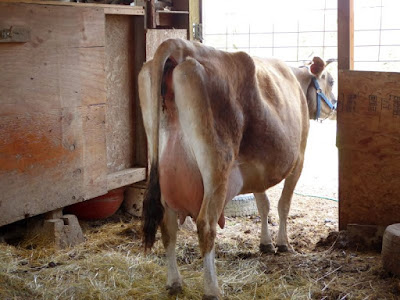 Early Thursday morning, just after 5 a.m., I checked Polly and found her lying in the barn. She seemed a bit agitated -- her tail was twitching -- but as I watched, she started chewing her cud, so I left her alone.

Not 45 minutes later, I checked again -- and this is what I saw: 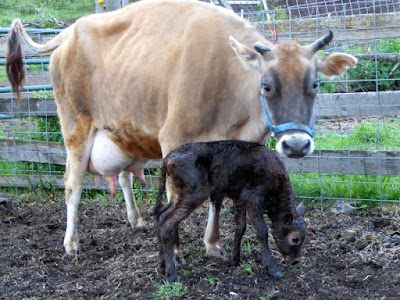 The fact that the calf was already on her feet, however unsteadily, meant the active delivery happened shortly after checking Polly the first time. (Don't ever tell me a cow doesn't chew her cud during labor, because it's not true.)

The calf is a delicate, dazzlingly pretty little thing. After petitioning Older Daughter to supply me with some fairy-related names (because of the baby's fairy-like beauty), we chose Pixie.

Polly was still heavily cramping, straining to pass the placenta. 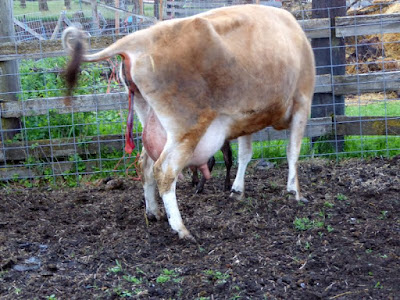 Pixie wobbled about unsteadily, searching for the faucet. It's always amazing to watch a newborn's instinct at work. 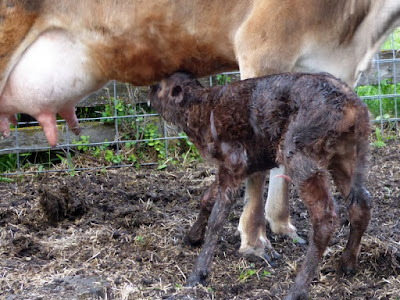 Occasionally her footwork was faulty and she tumbled over. Crash-and-burn, I call it. 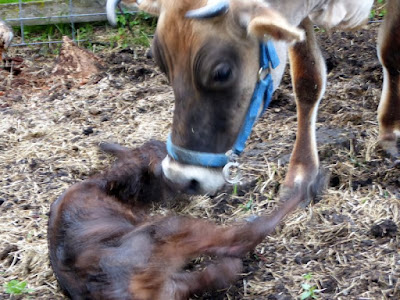 But gamely she climbed back onto all fours. 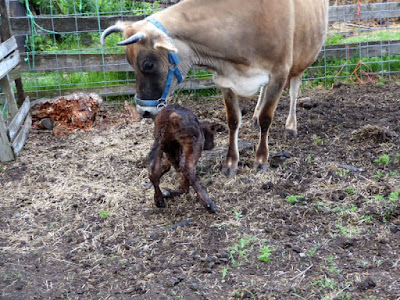 This little girl is exceptionally pretty. The name Pixie suits her well. 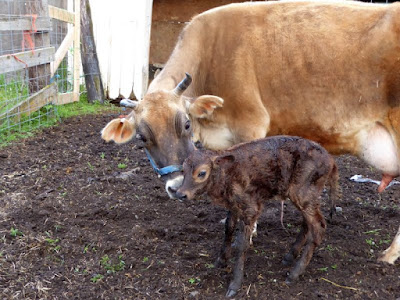 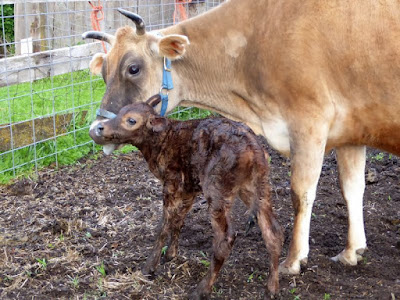 I checked in an hour later, and Pixie was nearly dry and much steadier on her feet. 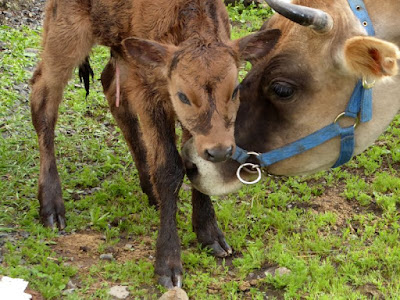 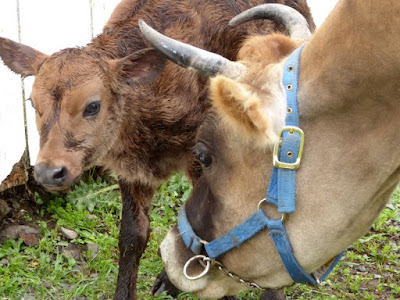 Polly has been very attentive from the start. 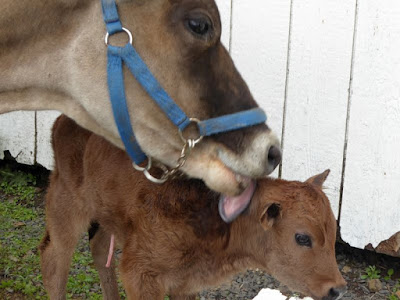 Finally, about three hours after delivering her calf, Polly delivered the afterbirth -- and promptly ate it. As I've said before, it's disgusting to watch but very instinctive. 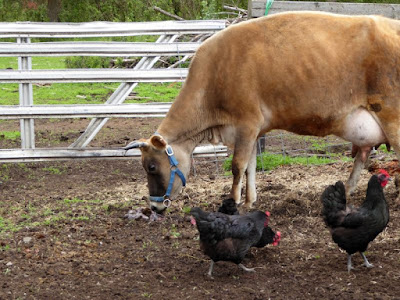 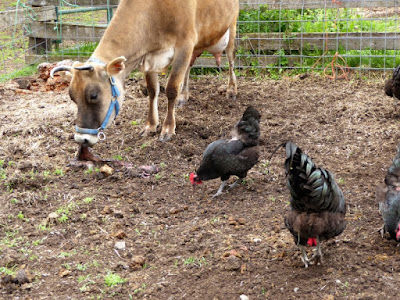 Pixie is very strong and a good nurser. 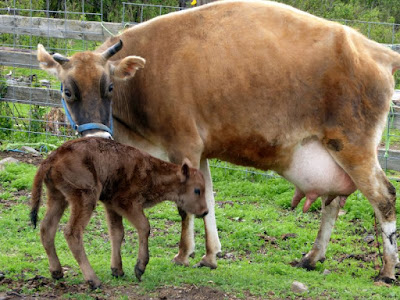 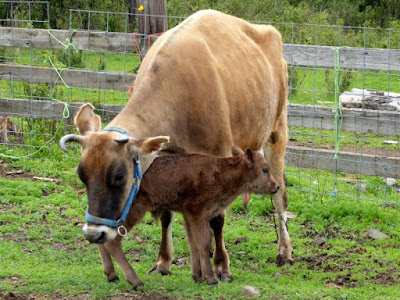 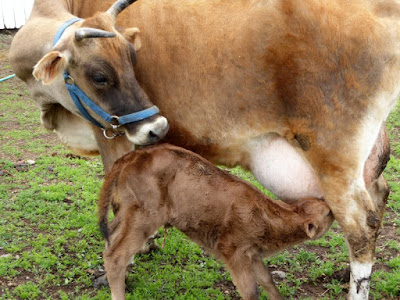 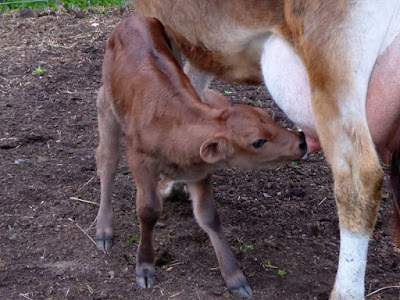 Now that she has a calf to occupy her, Polly is much calmer. 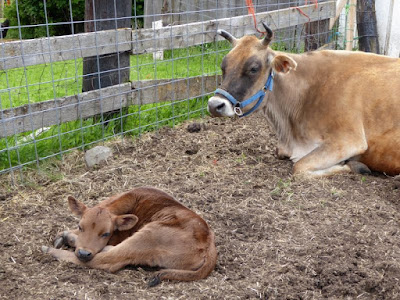 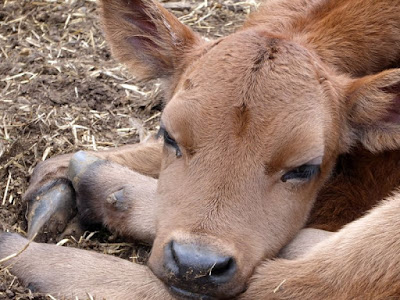 We'll keep Polly and Pixie in the corral for a few more days until we can dehorn the calf, after which we can return them to the pasture. Meanwhile I'll start milking Polly Monday morning. Fresh milk, yum!
Posted by Patrice Lewis at 9:12 PM