Watch out for those zombies

Monday morning at precisely 4:38 a.m. -- I know this because I looked at the clock -- I was awakened by the sound of a gunshot on the road by our pasture. Then a second shot. Then a third.

This is about the time every morning our neighbor D. leaves for work. "I'll bet D. got a porcupine," I mumbled sleepily to Don.

Porcupines are a menace to pets and livestock, as everyone knows, and D. -- an expert hunter with over 40 years of experience -- has little tolerance for them. He will routinely dispatch them whenever he comes across one.

Later that afternoon, D. called for another reason, and mentioned in passing we should keep our dog Lydia out of our pasture until we searched it for a dead porcupine. "It was dark when I shot it," he told Don, "but I'm pretty sure it went under your pasture fence."

So for our evening walk with Lydia, rather than letting her loose in the enclosed pasture as we normally do, we leashed her up and walked along the road instead.

I was vigilant the porcupine might not be in the pasture -- it's pretty tightly fenced -- but instead might be on the side of the road, and I didn't want Lydia tangling with it. She certainly knew something was up, as she sniffed intently along portions of the road. But nothing happened until we were heading back to the house.

Suddenly she lunged toward the roadside so hard and so fast that I started skidding on the gravel, unable to stop her. "Hold me hold me HOLD ME HOLD ME!" I shrieked to Don as I flailed on the gravel. He grabbed my hand, then grabbed the leash and started reeling Lydia in.

It was a moment too late. She had spotted the animal, invisible in the tall grass. Our dog came away with a snootful of quills from the porcupine -- which was still alive.

"Take her back to the house," Don told me. "I'll take care of the porcupine."

Poor Lydia was whining and trying to swipe the quills off her face. I pulled her along as a shot rang out behind me, then a second, then a third.

In the house I stripped off my coat and told Younger Daughter, "Lydia found the porcupine." We gathered scissors and pliers as Don came in. 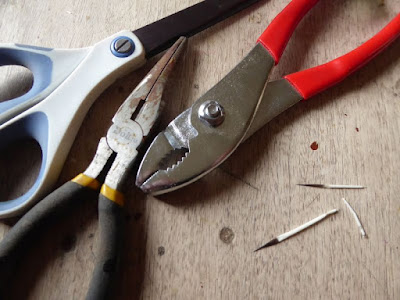 I can't blame Lydia for being so agitated, but the fact remained simply couldn't keep her still long enough to yank them out of her face. So, without a better option (since, of course, our county's vet office was closed since it was late evening), we bundled her into the car (with Younger Daughter in back to keep her calm) and I made a mad dash into Post Falls to the emergency vet clinic.

I've been to this clinic once before when our old dog Gypsy got a face-full of quills when a porcupine got in our yard. Poor Gypsy was far worse off than Lydia -- Gypsy looked like she was sporting a full mustache and beard and had a mouthful of hay after her encounter. By contrast, Lydia only had about 20 or 30 quills, versus the hundreds Gypsy had.

Normally the drive to Post Falls takes me an hour and a quarter. I was there in 45 minutes. I'm thankful I wasn't pulled over for speeding.

Like Gypsy the time we ran her to the vet, Lydia was actually quite calm in the car. It's like she knew we were getting her help. However as we pulled up in front of the vet's office, I told Younger Daughter, "Put her leash on and hold onto it while I open the back hatch."

It's a good thing she did, because the moment the hatch opened, Lydia leaped out and would have bolted into the night.

The vet clinic is wonderfully sympathetic and professional. Their services cost a premium, but believe me, when your beloved dog is in pain, you don't care. They whisked Lydia in back, anesthetized her, and pulled all the quills out. Here are just a few of the quills the vet collected: 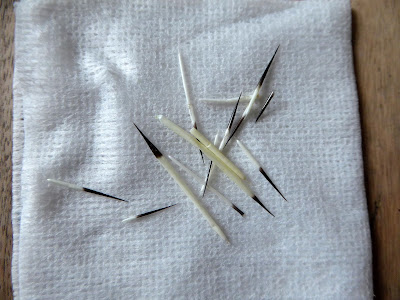 Then they gave her a shot of anti-sedative to bring her out of her sleep. Poor Lydia came stumbling out of the back room of the clinic, eyes sunken, looking dazed and confused. But she was quill-free. I lifted her into the car and started driving home. She immediately sacked out. Younger Daughter snapped a pic. 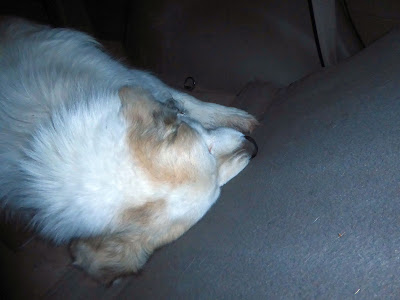 When we got home around 10 p.m., Lydia stumbled into the house and stood, swaying. Slowly she sank down, first her hind quarters, then her front paws, then her nose, and slept where she was. 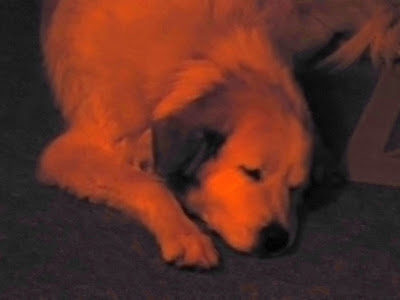 Yesterday Don and I went for our usual daily walk. We looked for the porcupine, since we wanted to later dispose of it so no other neighborhood dog got tangled with it.

The porcupine wasn't there. We carefully picked our way around the immediate vicinity -- and I found it. Still alive.

Don told me to step away, which I did. I was physically nauseous at the thought of the porcupine still being alive more than 24 hours after it was shot -- six times. I don't like any animal to suffer. 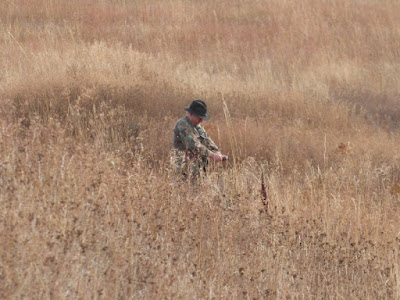 "Those things are tanks," he said after he confirmed the beast was finally dead. "It's like killing zombies."

We still haven't collected the carcass, but we plan to today. 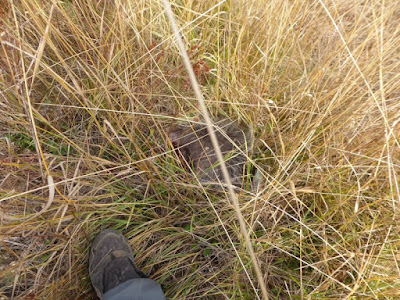 Meanwhile, I picked up a magnetized business card from the emergency vet clinic. It will stay on our refrigerator. Clearly we never know when we'll need it. 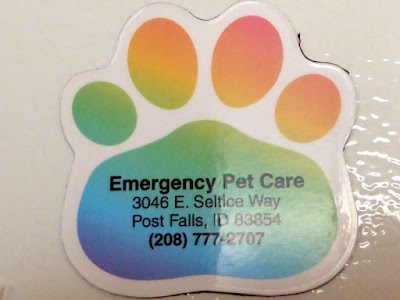