Plum butter in a crock pot

I got a call a few weeks ago from a neighbor. It seems her yellow plum tree was overflowing with plums, and did I want some? 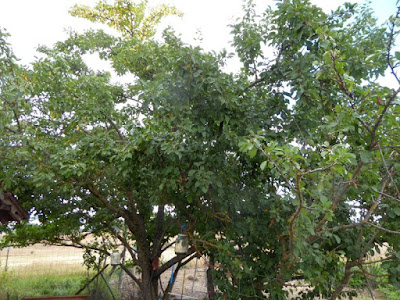 You bet! Younger Daughter and I grabbed baskets and off we went. The plums were abundant and beautiful. Not huge, but very sweet. 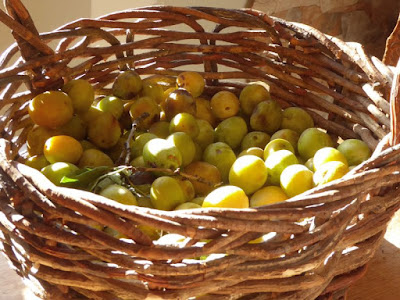 I wanted to make plum butter, so after putting aside some of the best for fresh eating, I pitted the rest. 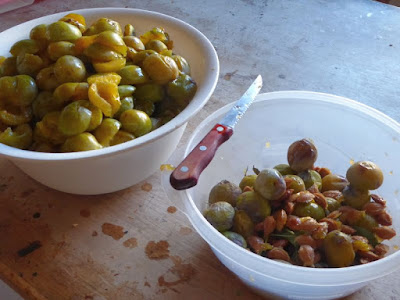 Then I set up the food strainer... 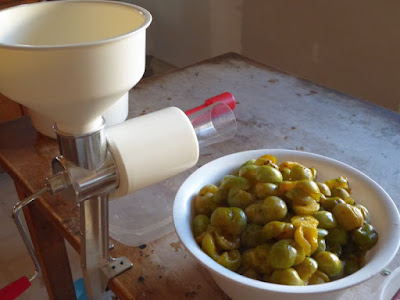 ...and started running the fruit through. Took no time at all. The pulp was a lovely golden-yellow. 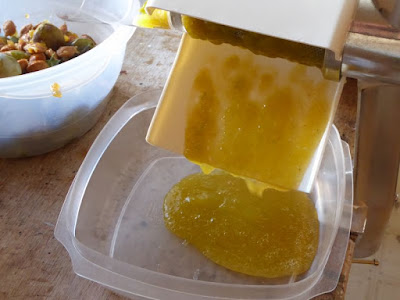 Don said the waste looked like what comes out of a horse's backside. Vulgar, yes, but I couldn't argue with the accuracy of the description. 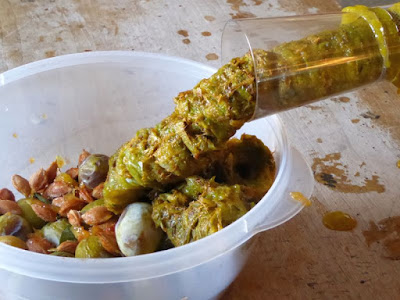 The chickens thought the scraps were fabulous. 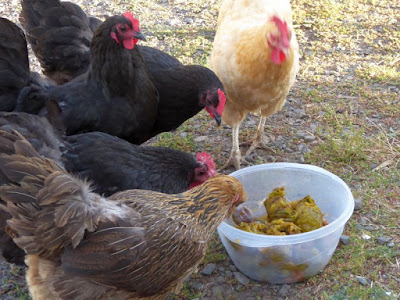 I put all the pulp into the crock pot (some people call them slow cookers since Crock Pot is a brand name). 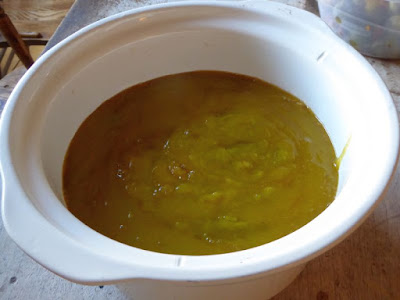 I put the setting on "low" and let it sit overnight. 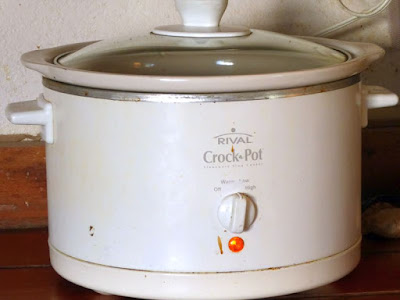 Then came the cleanup. Of course. 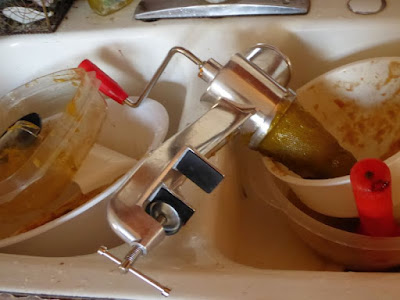 I had never made a fruit butter in a crock pot before, but lots of online sources said it's so easy. And they were right. An occasional stirring is all it took.

Before I went to bed, I cracked the lid open for the night to let the steam escape and allow the plum pulp to reduce. The color changed from golden-yellow to a rich purple. 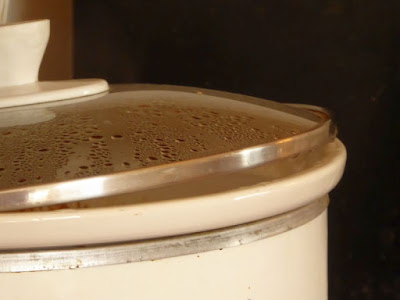 The next morning the butter was thickened, but not quite as much as I wanted, so I let it continue to simmer throughout the day. Then I made my fatal mistake.

Don and I had a rare "date night" and went to the county fair. He suggested I remove the butter from the heat before we left, but I said, "Nah, it'll be fine."

We had a splendid time at the fair... 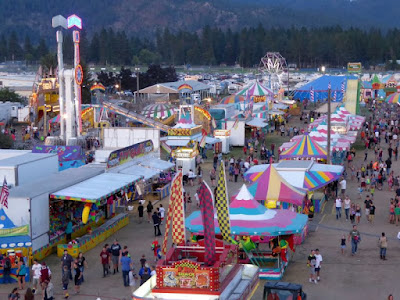 ...where we saw every conceivable foodstuff "deep fried." 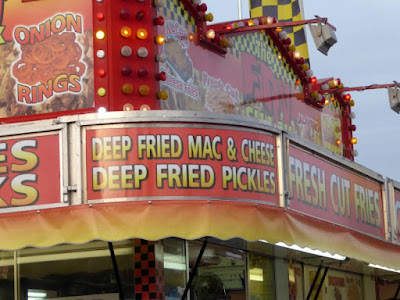 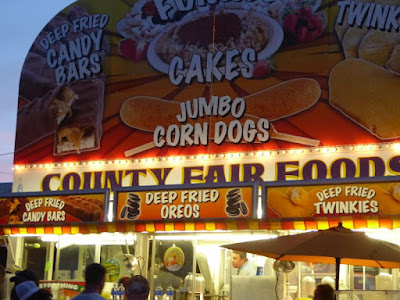 Anyway, suffice it to say by the time we got home, the plum butter was burned beyond redemption. Oops. 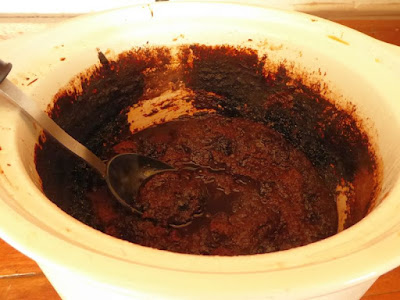 We didn't get back to the neighbor's plum tree until last Wednesday, by which time 95% of the plums had already been picked, given away, dropped to the ground and squished, or attacked by yellow jackets. We collected the least-mushy fruit we could find. The nice thing about making fruit butter is you can use past-its-prime fruit. 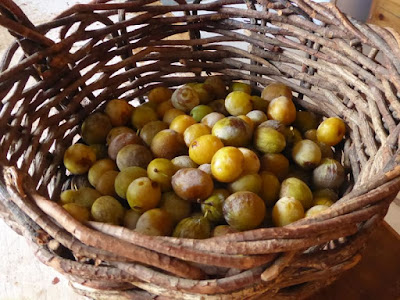 Once more I went through the process of pitting the fruit and running it through the food strainer, then putting the pulp in the crock pot. 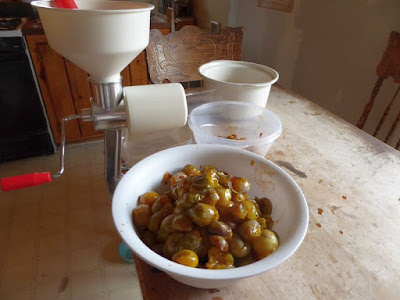 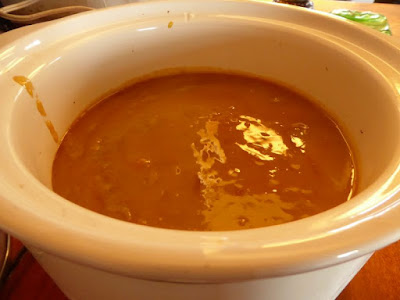 Once again I let it simmer overnight, leaving the lid cracked open so steam could release. I let it simmer through the late morning, at which time it seemed thick enough. 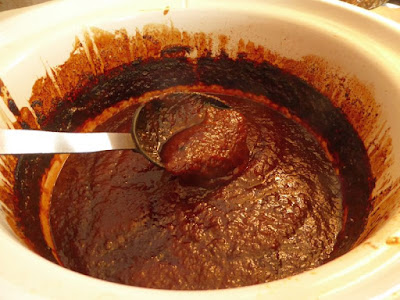 It was fairly sweet, but I went ahead and added a quarter-cup of honey and a squirt of vanilla. 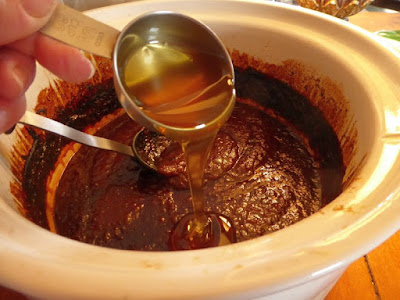 Then I filled half-pint jars with the hot butter. 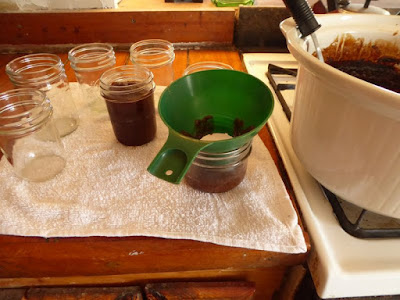 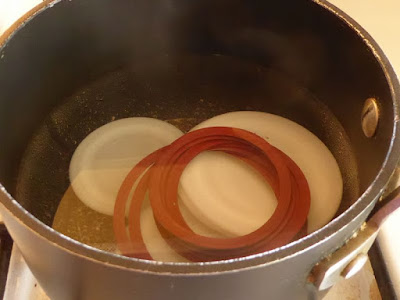 Fruit butter needs to be processed in sterilized jars for ten minutes (jars need to be sterilized whenever anything processes for ten minutes). Since I hate sterilizing jars, I chose to process the butter for 20 minutes to make up for the lack of sterilization. 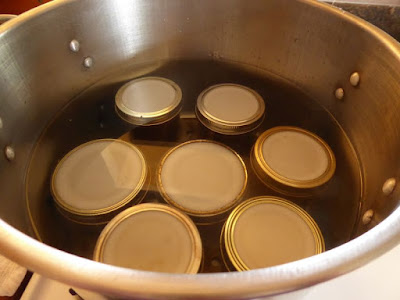 Fruit butters are a spiffy way to use up mushy fruit and convert it into something delicious rather than consigning it to the compost pile. And using a crock pot means you don't have to babysit the stuff for the looooong time it takes to cook down. 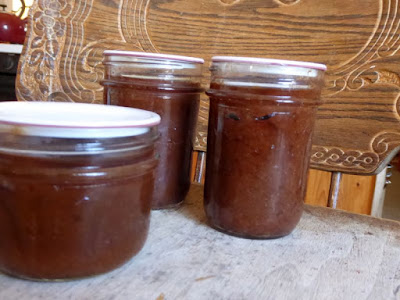 Just don't go to the fair in the meantime.
Posted by Patrice Lewis at 1:18 PM