We moved the cattle to the wooded side of our property on Saturday (I'll post pictures shortly). Yesterday morning from the window, I saw this view: 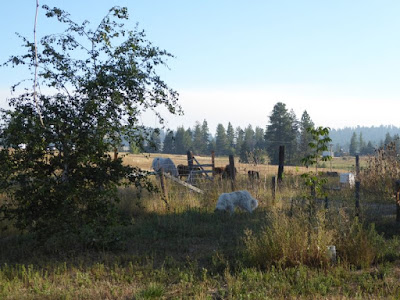 The morning shadows were still long so the photo isn't very clear, but you can see Brit (our horse) and a number of cattle grazing. The air is a bit smokey because local farmers are burning off crop residues this time of year. In the foreground on the left is an aspen, and on the right is the young walnut tree we planted in May.

Now consider this: Yesterday morning we got a call from Older Daughter, whom many of you know is working as a nanny in New Jersey. It was her day off, so she was calling from a café in New York City, where she was enjoying a cup of tea and a bagel. The reason she called? Because the contrast between what she was seeing and what she knew we were seeing was so huge. 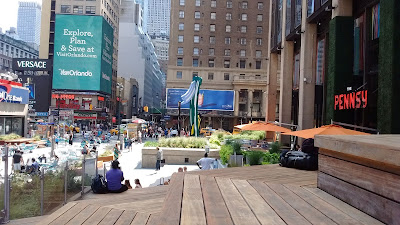 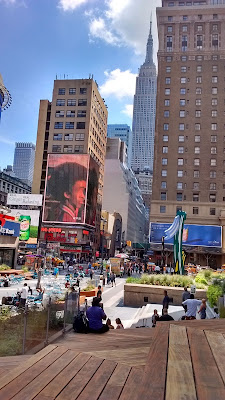 We asked her to take some photos. When she said the view was nothing special, we reminded her of the obvious: what was ordinary to her was unbelievably exotic to us. When she sent the pictures, she wrote, "Just down the road to the right is Penn Station, I was waiting for the hourly train back. Next time I think I'll make a trip specifically to go to the Natural History Museum."

We always told the girls the city life is fun and exciting when you're young. Both Don and I lived in cities when we were single, and later in the early days of our marriage. There's always stuff to do, see, and experience -- even if it's sitting in a café with tea and a bagel, watching the pulse of the city.

I think you'll agree the respective views we both saw yesterday are about as far away from each other as it's possible to get.

We're glad Older Daughter is experiencing a taste of urban life while she's young. And maybe there's someone in New York City who thinks a view of cows is exotic.
Posted by Patrice Lewis at 9:39 AM