A few days ago I made a passing reference to my bread machine, prompting some questions from interested readers.

I'm no good at breadmaking. Early in our marriage, I tried and tried and tried to make bread ... and didn't have much luck. Long story short, around 1996 or so I broke down and purchased a bread machine, specifically a Regal Kitchen Pro Model no. K6743. At the time, it was one of the top-rated machines. 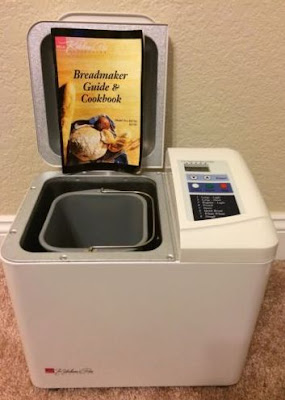 (I took this photo off an eBay listing, because my bread machine isn't nearly this clean and shiny.)

This marvelous invention has churned out literally thousands of loaves of bread over the last 20 years. Don's a sandwich guy, so on average I make two or three loaves a week. 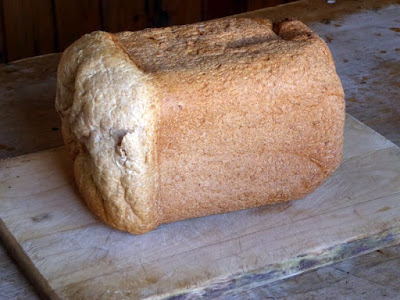 For awhile, bread machines were the "thing" to have, but for some inexplicable reason many people never used them once they had them. As a result, you can often pick up pristine hardly-used machines in thrift stores, often with the instruction books intact. Gold!

I'm sure today's modern bread machines are far better than the one I currently use, but I certainly have no room to complain about my particular model; it still works flawlessly. A lot of newer machines produce more "loaf-shaped" loaves as well, but we're so used to the taller vertical bucket that we never give it much thought.

For literally the entire lives of our girls, they've eaten homemade bread. In fact, here's a true story: One time when Younger Daughter was just a baby, I got behind on making bread and we ran out, so Don purchased a couple of loaves at the grocery store. When he came home, Older Daughter (who was about three years old) watched him unpack the items. Suddenly she came flying into the bedroom where I was changing Younger Daughter's diaper. "Mommy, mommy!" she yelled with great excitement. "The bread! It’s sliced!"

The girls have dabbled in the "great unknown" of commercial white bread at various times, but they're grown to dislike the pasty consistency and bland flavor and now appreciate a good wheat bread.

Over the years, I've made different types, but our daily standby is wheat. It's not whole wheat, since the recipe calls for both unbleached white flour and oatmeal, but it's tasty and hearty and makes excellent sandwiches.

One reader asked what yeast we use. I buy bulk Saf Instant yeast and store it in a quart jar in the fridge. 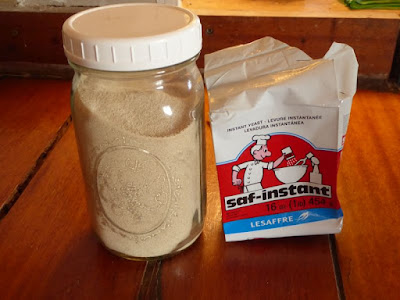 At first I was embarrassed to be "caught" using a bread machine, but gradually I came to realize I should be no more embarrassed than if I were "caught" using a washing machine or a similarly useful invention. The fact of the matter is, I would not make homemade bread nearly as fast as Don could eat it without the handiness and ease of this gizmo.

So that's the skinny on our bread machine.
Posted by Patrice Lewis at 6:19 AM