On this past weekend's WND column entitled "Is Feminism Killing Women?", I hadn't caught up on the comments for a few days and was astonished to see there were over 100.

One commenter named Robert has taken it upon himself to criticize every column I write, particularly addressing the regressive, knuckledragging methods we used to raise our daughters (how dare we homeschool!). I don't mind this in the least, because it generates additional comments, and lovely people step in to my defense.

However Robert does raise one good point: I've neglected to keep readers updated on our daughters' progress.

Here is Robert's comment (referencing my aversion to feminism): What gets to me is that PL's home-schooled daughters were spoon fed a steady diet of this pabulum. Last I knew, neither was college bound and the eldest was working as a hotel maid.

So, without further ado, here's an update on the kids:

Older Daughter, as many of you know, did indeed work as a "hotel maid" for a couple of years. It was actually an upscale motel, not a hotel, and she was the best durned housekeeper the motel owners ever had. She was 16 and 17 at the time. I don't know what else Robert expected a teenager to do to earn money -- CEO of a huge corporation, perhaps? -- but the job gave Older Daughter the opportunity to cultivate her work ethic and save her pennies. As a result, she was able to garner a glowing letter of recommendation from the motel owners and emerge with a substantial savings account.

She took that work ethic and letter of recommendation with her to nanny school last summer, and graduated top of her class. 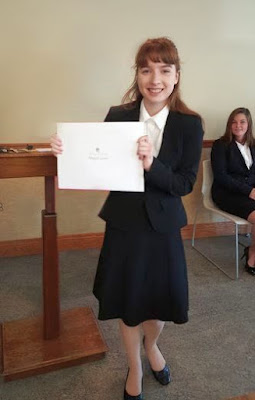 With yet more glowing credentials, she landed a job as a live-in nanny to four boys with a family in New Jersey, starting last November. She enjoys the job and the family thinks the world of her. Because she's a live-in, she has very few expenses and is banking about 80% of her salary -- a salary, I'll add, that exceeds the pay of many first-year teachers. Her savings account at the moment is a hair's breath away from five figures, and she's been on the job less than six months. Not a bad position for a 20 year old.

Younger Daughter is taking preliminary classes at the nearest college toward her goal of becoming a radiographer. She's acing her exams -- on her last two tests, she scored 100% on one and 94% on the other. To earn money, she's doing yard work for an elderly neighbor as well as picking up other part time work as available. This summer her former violin teacher, who also happens to be CEO of the local hospital, has promised her a job at the hospital where she can work directly with the radiography department. Younger Daughter is 17 at the moment, though she turns 18 in just a few days.

Like Older Daughter, our youngest is cultivating a work ethic, saving her pennies, and earning the esteem of college professors and hospital CEO's. Both our daughters are moral, honest, and hard-working young women.

I dunno, I think our girls are doing pretty well, considering they've been "spoon fed a steady diet of this pabulum" their whole lives.

But maybe that's just a proud mama talking.
Posted by Patrice Lewis at 9:11 AM