Fight to the death

Two days ago we went out to feed the bees, something we've been doing about every five days. But when we opened up the first hive, we were alarmed to see yellow jackets -- hundreds, perhaps thousands, of yellow jackets -- and very few bees. 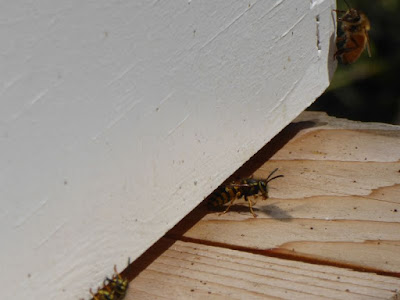 Alarmed, we put the lid back on the hive and retreated to the house, where we did hasty internet searches for what to do. Don slammed into the shop and made two screened wasp guards for the hive openings. Then we re-donned our bee suits and prepared to do battle.

We re-opened the first hive and began removing frames and found the hive had been utterly decimated. There was clearly no queen, and in fact there were so few bees -- but thousands of wasps -- it was if we'd stepped on a wasp nest. The yellow jackets were swarming around us, buzzing and furious.

And everywhere we looked, we saw the poor bees locked in mortal combat with the enemy. 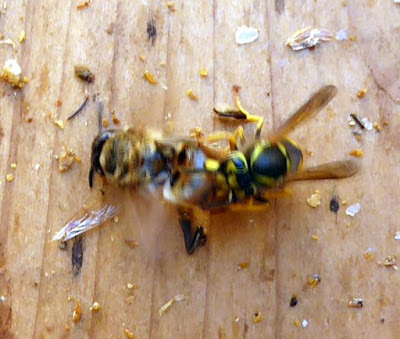 We were being absolutely swarmed by yellow jackets, so we ended up just picking up the hive and dumping it about fifty feet away in an effort to remove the worst offenders and possibly save the second hive. 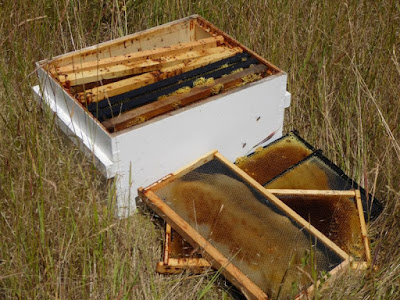 What follows may be absolutely the wrong thing to do, but we found very little information during our hasty internet search on how to save a hive that was already under active attack by yellow jackets.

We opened the second hive and found it was still active. It was also inundated by wasps, but not as badly as the first hive. However it wasn't as if we could go through each frame and pick out the wasps. Not only were they everywhere, but they were flying and landing and more were coming in. Additionally all the now-displaced wasps from the dead hive were swarming all over us and the second hive.

So we re-closed the lid and Don installed the wasp guard across the hive opening. This reduces the size of the opening and gives the bees (in theory) a fighting chance to defend their hive. 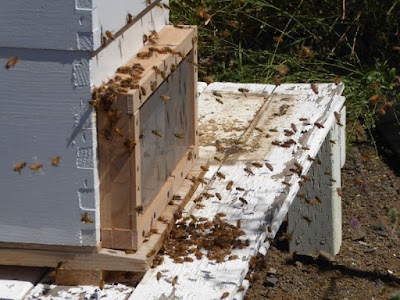 We saw a lot of wasps coming out of the hive. 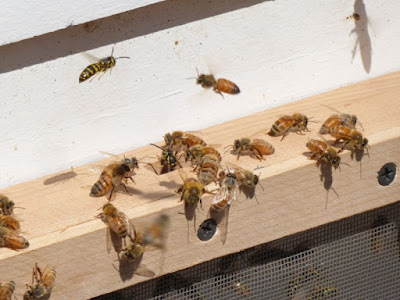 The next thing we did was prepare new wasp traps... 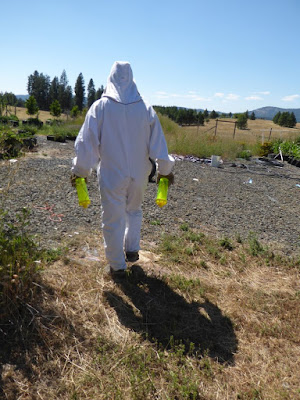 ...which we hung right next to the hive. 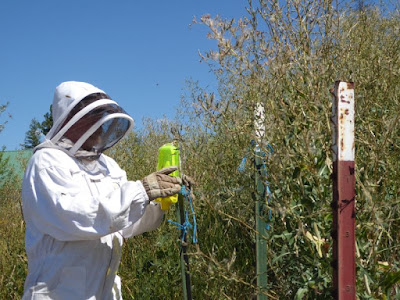 It took about ten seconds for the first wasp to make its way in. 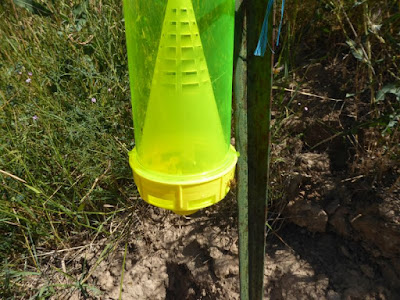 We also had two traps we had hung a few days before further away from the hives, so we relocated those closer. 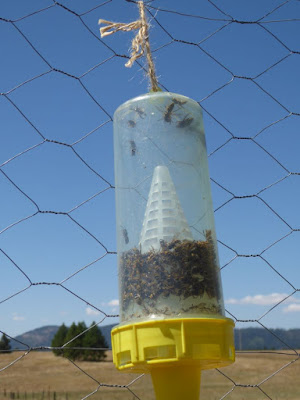 By this point we'd been around the swarming insects for an hour in the heat, watching our poor bees fighting for their lives. We decided to leave the hive alone until after sundown and came into the house curiously exhausted and very discouraged.

We did more internet research and placed calls to two beekeepers (no one was home) but didn't find any more information about how to save a hive that's already been attacked.

I did find a memorable description of yellow jackets from one frustrated beekeeper whose hive had also been attacked: "Yellow jackets are nasty, mean-spirited wasps who build their nests from wood-pulp, not wax. Each colony starts the year anew from a single queen, with no sense of contact or history of their previous generations. They eat bugs and other meat that they can lay their greedy little mandibles on, hovering around garbage cans and other foul refuse. They can sting again and again, and do so with malice and relish."

We still needed to feed the bees, so after sunset we re-donned our bee suits, took the syrup, and opened the hive.

Already agitated, the bees swarmed angrily around us. We moved some frames around and inserted two feeders, and were pleased to see the hive appeared strong. We filled both feeders to the brim.

There were hundreds of bees gathered on the platform outside the warp guard, so I attempted to sweep them (using the bee brush) onto a dustpan and put them into the hive. This attempt brought out so many furious bees that we had a veritable cloud around our heads. (Thank God for bee suits!) At this point, figuring we were doing more harm than good, we closed the hive, retreated toward the house, carefully inspected each other for any stray bees, and stripped off our suits.

The next day the bees were still agitated. I wasn't wearing a bee suit when I took these pix so I couldn't get up close to see what was happening.

At first glance it seemed things had calmed and the bees were doing better. 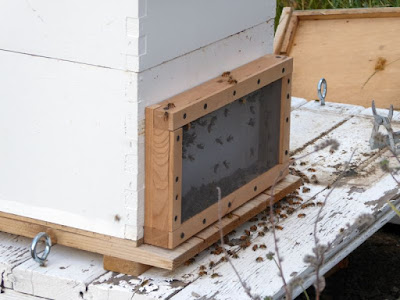 But zooming the camera in revealed wasps casually going in and out of the wasp guard. 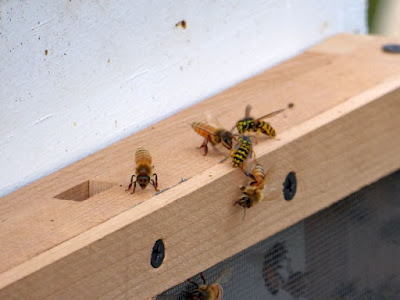 As I said, I couldn't get close because I wasn't suited up, so I don't know what's happening. Don and I will open the hive and feed on Sunday and hopefully get a better idea.

But I'm discouraged and wonder (a) what we did wrong, (b)what we might have done differently or better during this attempt to save the hive, and (c) if there's anything we can do from here out that might improve the chances our remaining hive will make it -- because right now it doesn't look good.
Posted by Patrice Lewis at 6:40 AM