All hail the queen

Some of you may be wondering how our one remaining beehive is doing after the huge and vicious Battle of the Bees last week. 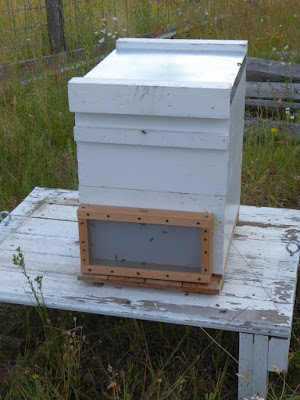 The yellow jackets wiped out one hive, though to be fair it was looking weak anyway. I think the queen had died and we hadn't realized it yet (sign of amateurs, obviously). Because there were so many wasps within the hive, we simply picked it up and dumped it about twenty feet away from the remaining hive. 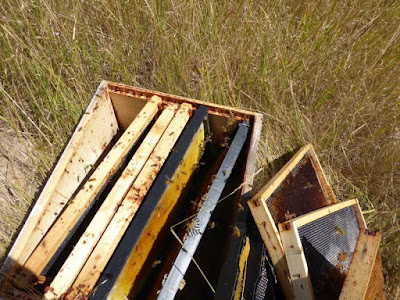 Days later, the wasps were still so thick on these frames that one night, after dark, Don suited up and took several entire frames -- lined wing-to-wing with wasps, he told me -- and bagged them up, tied off the bags very tightly, and put them in a spot where they would be thoroughly baked the next day. It worked, and got rid of several thousand yellow jackets. Most of the rest of the wasps have dispersed from the frames by this point.

Meanwhile, also working at night and well suited up, we closed the remaining hive, strapped it onto the tines of the tractor, and moved it several hundred feet away to a new location nearer the house (where we could keep a closer eye on it). 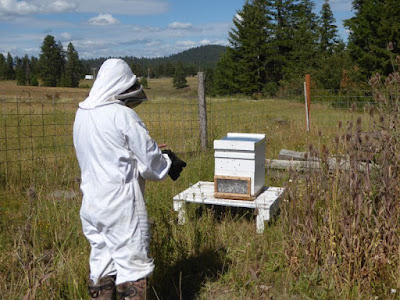 For the first couple days in this new location, the bees and wasps were still battling it out... 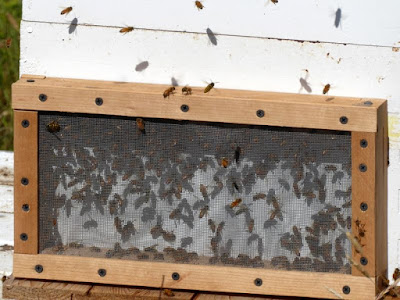 ...but this time the bees had the advantage. 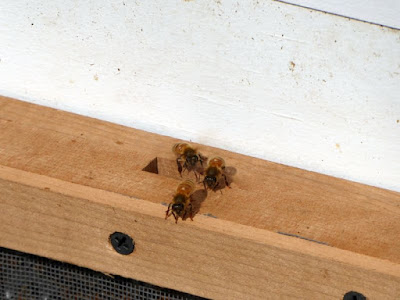 We baited traps and hung them all over the place, including on the hive itself, but for some reason they're not attracting many wasps. 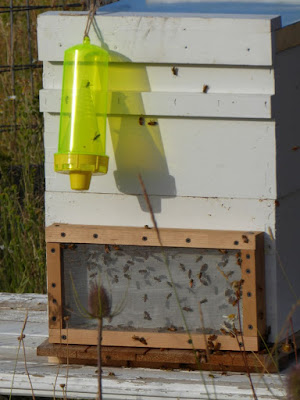 We've opened the hive twice, prepared to top off the feeders with syrup, and it simply hasn't been necessary. The bees are apparently foraging enough that they don't need the syrup. Before, when they were getting mobbed by the wasps, the feeders were being drained in two days and the bottoms of the feeders had hundreds of dead wasps. Hundreds. But now? Nothing. Evidently it was the yellow jackets who were sucking down most of the syrup.

The next logical question, of course, is whether or not the queen was still alive. So yesterday morning I suited up, determined to dismantle the hive if necessary in search of the queen. I've only seen a queen once before -- last year, when a professional beekeeper came out and showed me the ins and outs of our hives -- but this time I was attempting it on my own. I even took off my glasses before zipping up my bee veil -- I see close up very, very well without glasses -- to better inspect the frames.

I opened the hives, removed the still-full feeders, and one by one took out the frames in the super and looked them over closely. There was a surprising amount of honey, I was pleased to note, but the brood (and therefore the queen) was likely to be in the lower box. So when I finished inspecting the frames in the super, I pulled it off and started carefully removing frames from the lower box.

And I found her! I was thrilled! Here she is, lower center, surrounded by an attentive group of bees. All hail the queen! 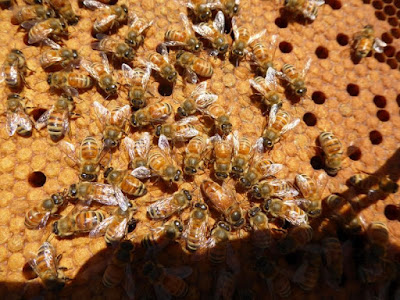 Notice, too, the nice frame of brood, ready to replenish the numbers of the hive.

So I reassembled everything and buttoned up the hive again. At this point we are cautiously optimistic that the hive will make it. We'll be eagle-eyed for any more onslaughts of yellow jackets, of course, and we'll be careful how we set up the hive over the winter. But for now, I repeat, all hail the queen.
Posted by Patrice Lewis at 8:24 PM