Another adult in the house

Younger Daughter turned 18 last week! We now have another official adult in the house.

It was a loopy week for our daughter. Her birthday fell on the day of the Northwest Preparedness Expo, so we were away from home. And for the first half of the expo, she was actually in a coffee house, studying for finals. (She's been taking some preliminary coursework for her chosen field of radiography, and I'm pleased to report she scored A's in both classes -- in fact, on one of her finals she got 100%.)

Between traveling and studying and exams, we didn't really do much to celebrate her entrance into adulthood. But when asked what she would like for her 18th birthday, she replied, "I want to go to Browser's and go wild."

Browser's is a tiny hole-in-the-wall second-hand bookstore in Coeur d'Alene. We found this little gem shortly after moving to Idaho in 2003, and it has remained, hands down, our favorite bookstore in the region. 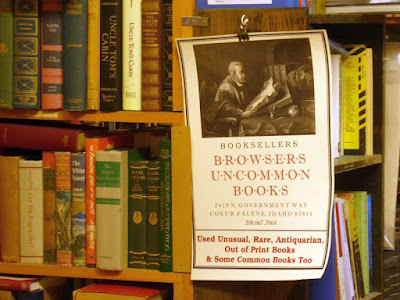 The guy who runs it is an aging hippy. He's gentle and charming and friendly and absolutely LOVES books. His store is also well-balanced, meaning it covers a wide variety of subjects. When the girls were younger, we found a lot of our classics here -- the store has a superb collection of non-textbook material for homeschoolers.

So last Wednesday, the day of her last final, I drove Younger Daughter into town, dropped her at college for her exam (while I went grocery shopping), then picked her and dropped her at Browser's. 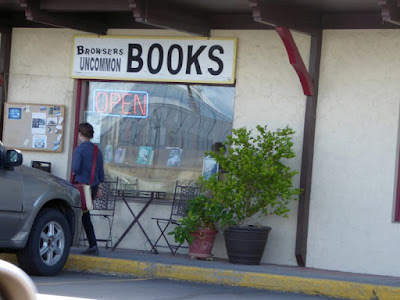 I left her there, undisturbed, for as long as she wanted (we had cell phones to communicate) and told her she didn't have a budget. This way she could poke around and take her time to choose which books she wanted.

I completed the rest of my errands and met her back at the store. I tell ya, just walking into the place makes me want to take the entire inventory home. It's everything a used bookstore should be -- a comforting combination of highly-organized and pleasantly chaotic. 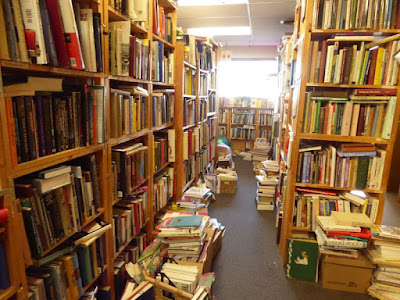 The store doesn't open until noon each day. My understanding is the owner spends his mornings scouring various places for books -- yard sales, estate sales, that kind of thing -- before bringing them back to the store for cataloging and shelving. As a result, the floor is often piled with new finds. 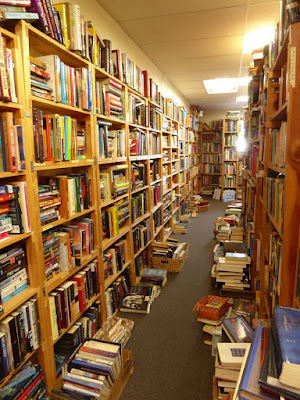 You've never seen a more content kid (well, adult) as Younger Daughter piled her birthday selections on a chair until we were ready to check out. (Ahem. I added a few for myself. What can I say, it's hard to resist.)

Afterwards, we loaded the books into the backseat of the car and she took one for the road. But she kept glancing back at the pile and grinning. "I just want to hug them," she said. 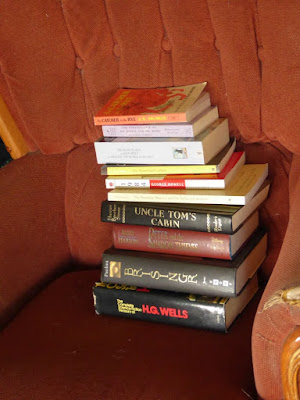 I can think of no finer way to launch our youngest into adulthood than feeding her mind. And if you're ever in Coeur d'Alene, go to Browser's. You won't regret it.
Posted by Patrice Lewis at 6:30 AM