Holy cow (no pun intended), we've got calves popping out all over.

Late Saturday night, around 10 pm, Victoria had her calf in the pasture. I tried to get a flash photo without much luck. 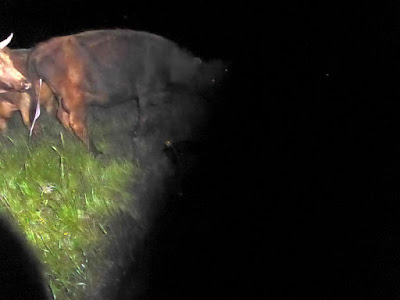 Sunday morning we went to fetch the calf to the barn. It's a boy, so we needed to have him close to castrate. 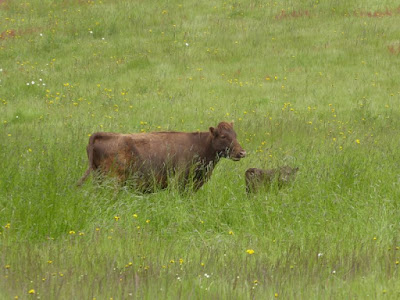 Out came Don with the faithful calf cage on the tractor. 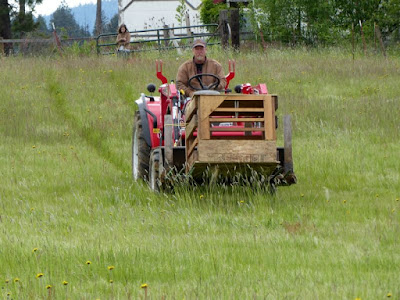 The calf cage has made life much easier for us. Here's Victoria and her baby in the barn... 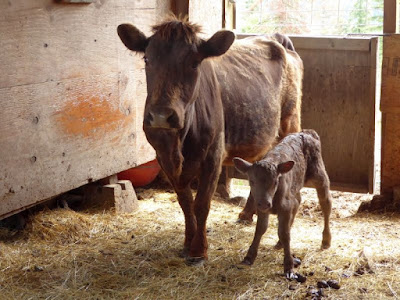 ...which adjoins the corral... 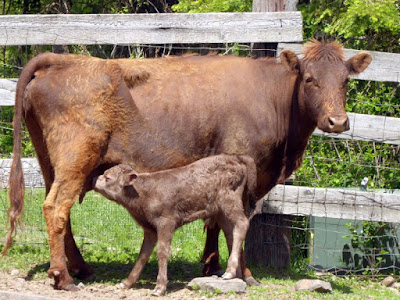 ...where Lucy and her baby are still residing until the baby is old enough to castrate. 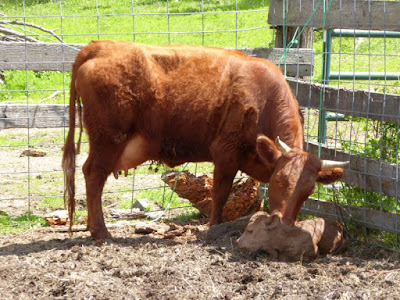 This meant the two calves got to play. Very cute. Meanwhile Matilda's calf, I'm pleased to report, found the faucet after only two days, relieving me of twice-a-day milking and bottle-feeding the calf. 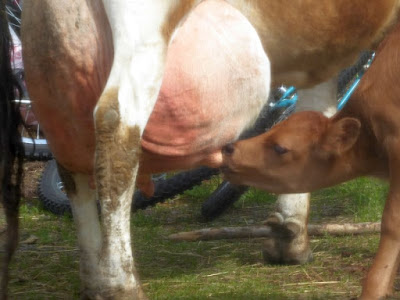 We've kept Matilda in the driveway area until such time as we could castrate. 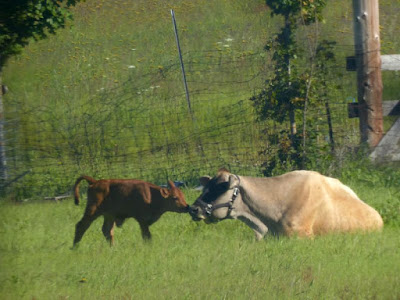 Then Monday morning, shortly after Younger Daughter came stumbling out of bed rubbing her eyes, she looked out the window and said casually, "Looks like another cow in labor." There's a country kid for ya.

Sure enough, Sparky was having her baby. She was at the "two hoof" stage. Birth is usually within half an hour at this point. 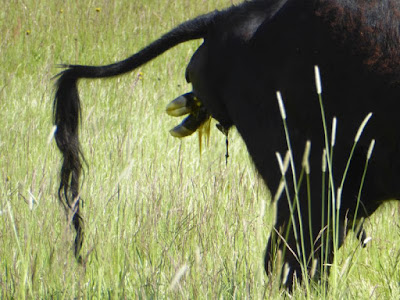 No privacy for a cow. Everyone wandered over to offer moral support. 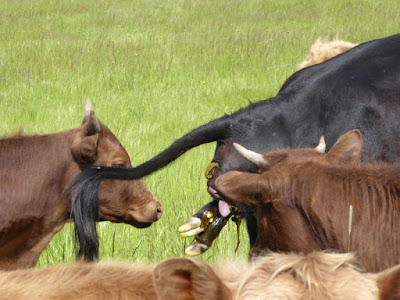 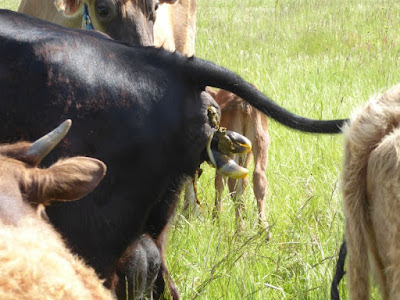 Finally, after a lot of pushing, straining, and groaning... 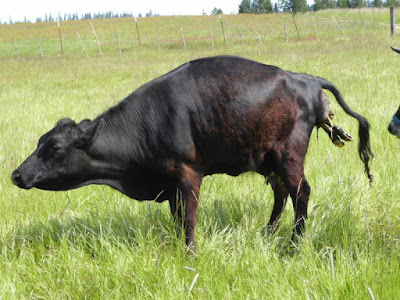 ...she delivered the calf. 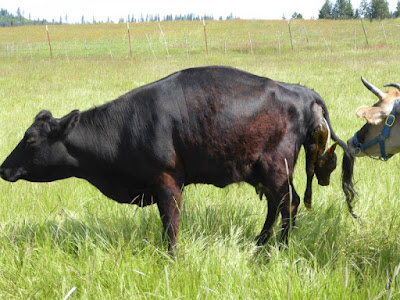 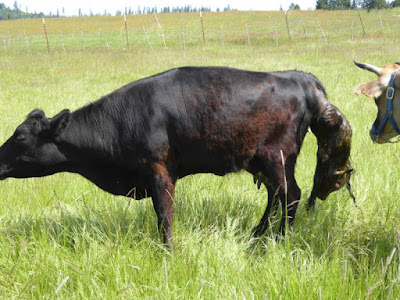 As well as all the amniotic fluid. 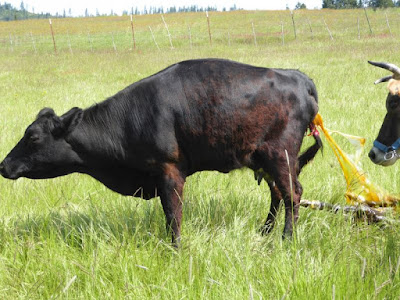 Immediately Sparky started licking the calf. Licking accomplishes three things: It cleans the calf, it stimulates circulation, and it familiarizes the mother with the calf's unique scent. (Trust me on this. With multiple calves gamboling through a field, I've seen a mother sniff one calf and move on to another it since it didn't smell like hers.)

Lots of curiosity about the newcomer. 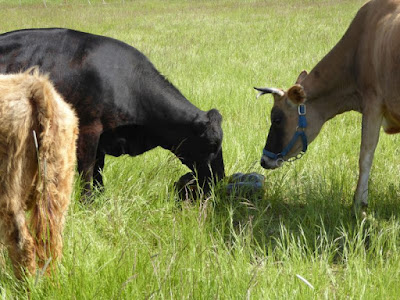 It's a little heifer, a rich chestnut brown. 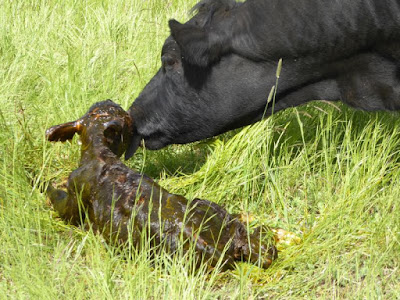 After fifteen minutes or so, her first shaky attempt to stand. 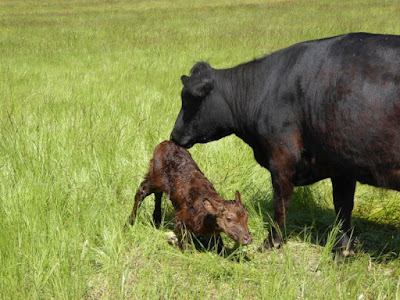 We gave Sparky and her baby a few hours to rest, then out came the calf cage once again. The heifer won't need castrating, of course, but we'll dehorn her. 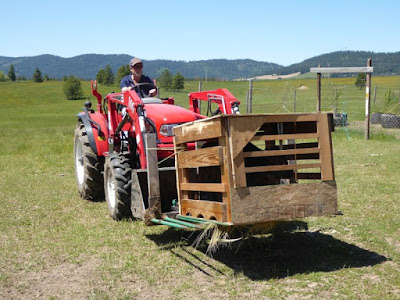 Here's Sparky and the baby in the barn. The calf is a good strong nurser. 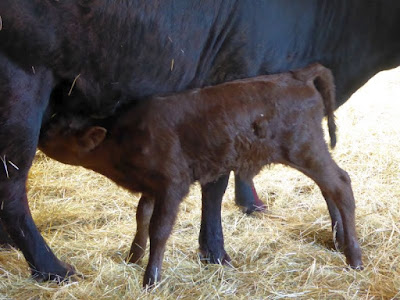 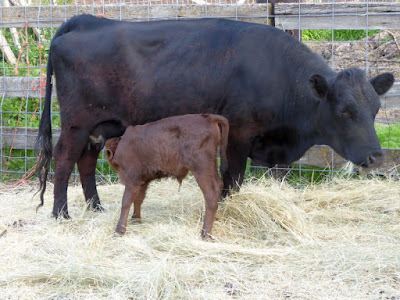 This makes six calves so far -- four bull calves and two heifers. We've steered the bull calves and dehorned one of the heifers (we'll have to wait about five days for Sparky's calf).

You'll notice, however, with the exception of Pixie (Polly's calf) I haven't given any names to the calves. That's because I thought I'd run a calf-naming competition among all of you, dear readers. We're waiting on one, possibly two mores calves, and when the full cadre has arrived, I'll post pictures and genders and invite reader participation.

We've had so many calves popping out that frankly we're dry on names; but it will be fun to hear all of your clever suggestions.
Posted by Patrice Lewis at 9:51 PM