Our bees didn't make it through the winter. 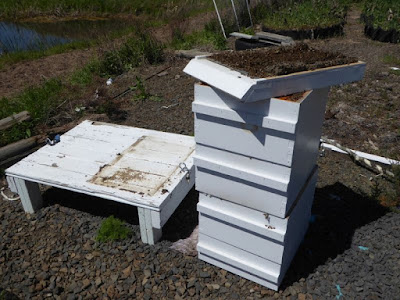 Last spring, if you recall, we entered the exciting world of beekeeping. Novices that we are, we experienced a lot of problems (including one hive which lost two queens in a row, causing us to combine the weak hive with the strong hive to make one large hive). It didn't help that we chose to start beekeeping during one of the driest summers on record, with very few flowers to keep our ladies alive and buzzing. We fed them all summer and fall with sugar syrup.

So the bees entered winter with limited stores anyway, and the final nail in the coffin was when we wrapped the hive in foam insulation with a foam cap to keep them protected from the weather. 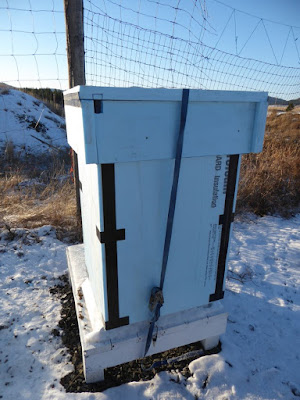 Wrong thing to do. As it turned out, the foam (especially with the cap) caused condensation inside the hive; and condensation is a bigger killer than cold. Sadly, it was a case of "live and learn."

It was discouraging to disassemble the hive a few weeks ago and view our bees, dead and moldy (condensation!). 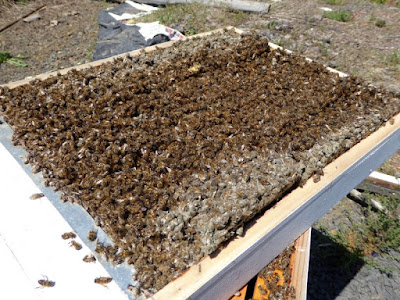 But we had two incoming "nucs" (so called because they're "nucleus colonies," miniature hives already set up with a queen, frames, brood, etc.) and needed to get things prepped before they arrived. Nucs (pronounced "nukes") are pricier than package bees, but they have the advantage of strength. They come with frames of brood already in place, so the population of the hive explodes shortly after arrival. Otherwise the package bees would have to wait for the worker bees to build comb, the queen to lay eggs, the workers to care for the brood, etc. before the hive's population could increase.

Last year we set the hive up just in the garden, but since we expanded the garden space this year to enclose our baby orchard as well as the pond, we decided the give the bees a more permanent setup. 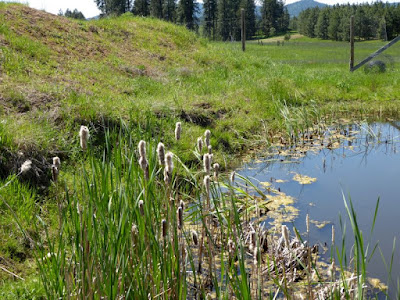 We put them in the lee of the clay/dirt pile from digging the pond, to offer some protection from the wind. The pond also gives them unlimited fresh water. 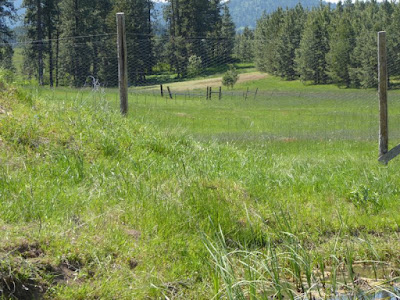 Don leveled a small section at the far end of the dirt pile. 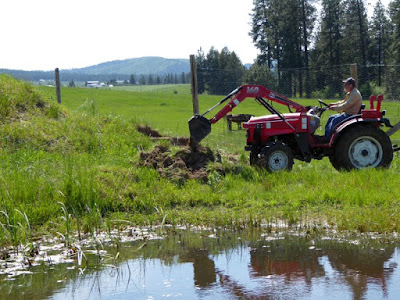 Then we put a section of tarp over the dirt, and anchored it with gravel. 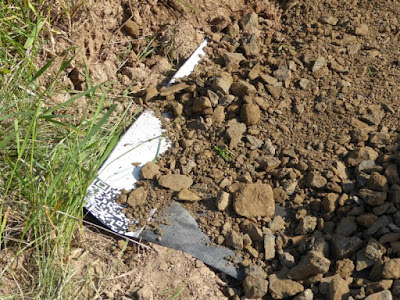 Don also put in T-posts to allow us to make a removable retaining wall to cut the wind in winter. 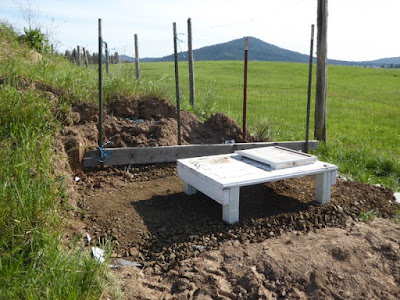 Then it was time to remove the frames from the hive and get things cleaned up. The frames with honey we put aside for extraction (more on that in a future blog post). 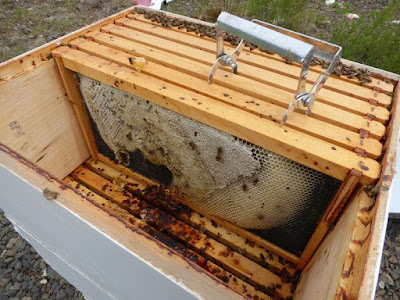 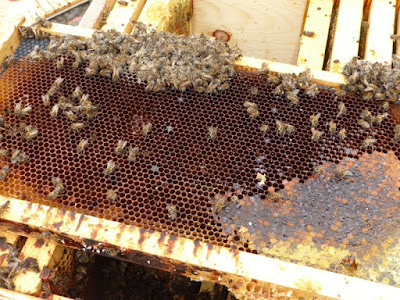 Poor little dead bees. I hated to see them clustered and moldy like this. 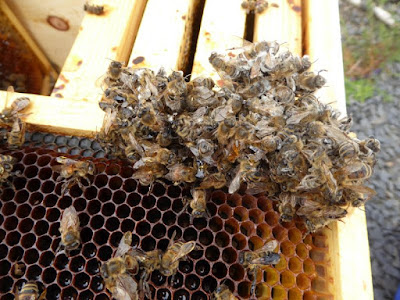 We got things cleaned up, the hive boxes moved, and clean frames ready for the incoming nucs. 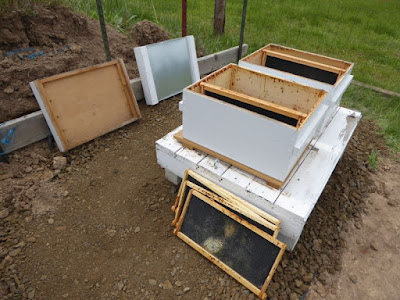 We got the call about ten days ago the nucs were ready to pick up. The beekeeper selling them had dozens stacked aside, waiting for others to pick theirs up. 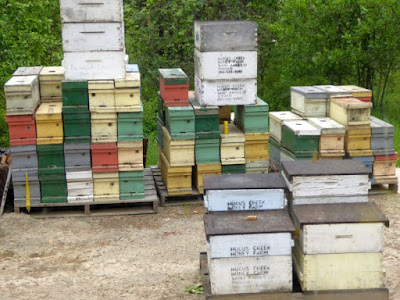 Here are our two nucs, tucked in the back of the truck for the trip home. Each nuc has about 10,000 bees and a queen, plus five frames and a lot of brood. 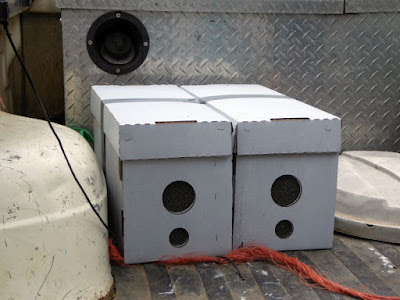 Once home, we paused to mix up a batch of fresh syrup, then suited up and got ready to hive the nucs. We had already cleaned the black plastic feeders, which we filled with syrup and inserted into the hive box before opening the nucs. 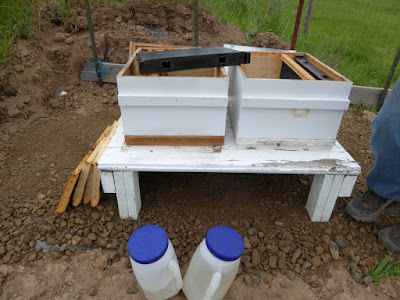 One interesting thing the beekeeper told us: We were prepared to insert clean, empty frames to supplement the frames that came with the nuc... 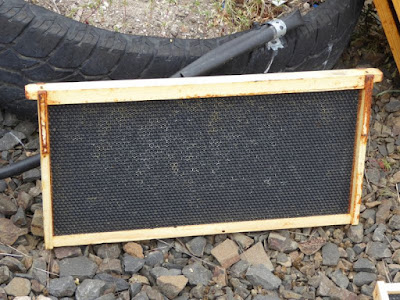 ...but the beekeeper said if we had any frames with existing comb, it was better to use those since it would save the new bees some work. Existing comb would provide abundant places for the queen to lay without having to wait for the bees to draw out fresh comb. It's the ultimate in recycling; I love it. 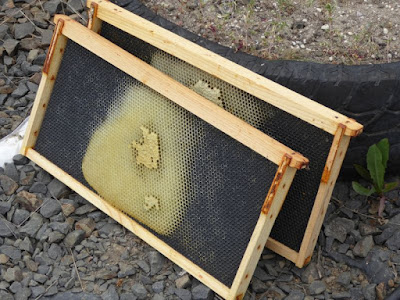 So with Don (suited just in case) and Younger Daughter (not suited, sitting farther away) perched on top the dirt mound to watch, I opened the nuc boxes and prepared to transfer the bees to their new home. 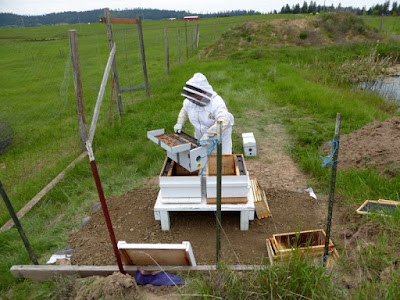 Transferring nucs is super easy. All I had to do was lift the frames carefully from the nuc box into the hive. 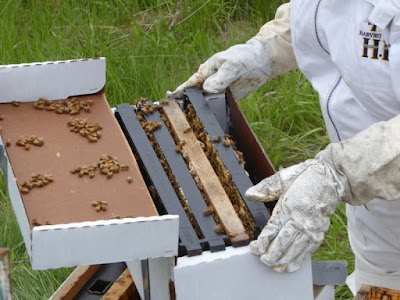 You can see how active the bees are, with comb already drawn out and capped brood. 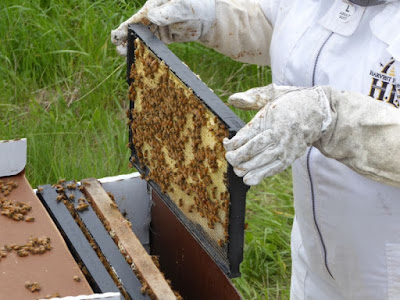 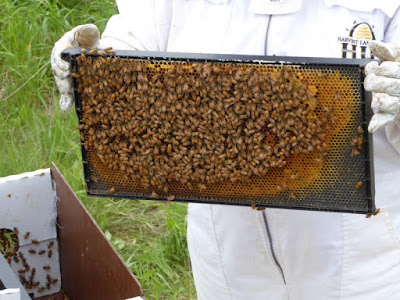 With one hive transferred and buttoned up, I started transferring the second nuc. 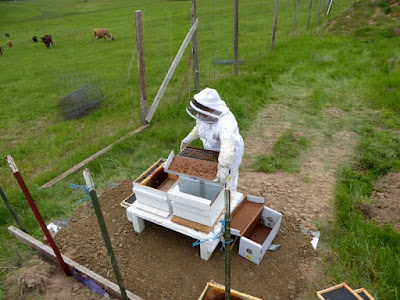 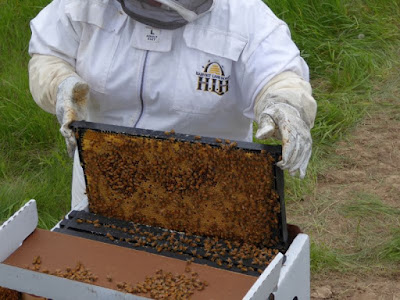 I made sure to tip out any bees left over in the nuc box, then put the open boxes next to the hives so strays could find their way to their new home. 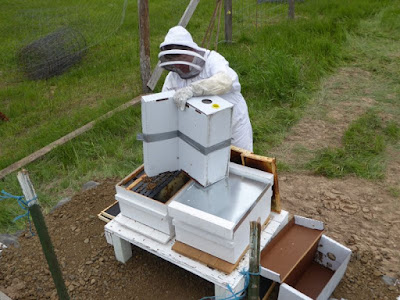 On went the lids, and we left the bees to settle in. 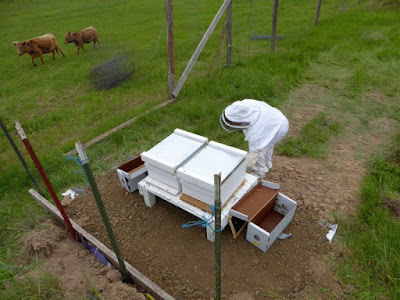 Throughout this process I slowly accumulated an audience of fascinated bovines. 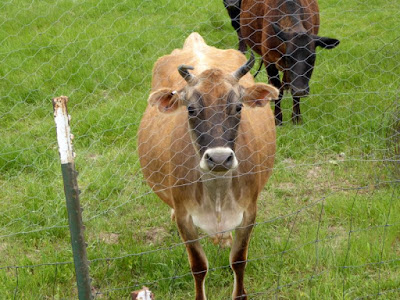 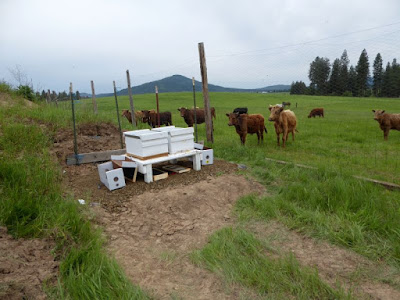 Cows and bees don't mix, so it's essential to keep the beasties away from the hives.

We opened the hive a few days later to top off the syrup and were pleased to see lots of healthy activity. In the last few days we've had a spate of ugly weather -- cold, howling wind, pouring sideways-slanted rain -- so there hasn't been a lot of outside activity under these conditions.

One more thing we just did: ordered wildflower seeds off Amazon.

This particular mixture will sow about 3500 square feet and contains flower seeds which bees particularly love and which are native to the Pacific Northwest region. They also won't need to be watered. We plan to sow them in the orchard, since the ground is already plowed up and it would be the perfect time to plant. The flowers will mature in late summer and early fall, just when the bees will need the extra boost. I'll be sure to blog about this as the wildflower project develops. 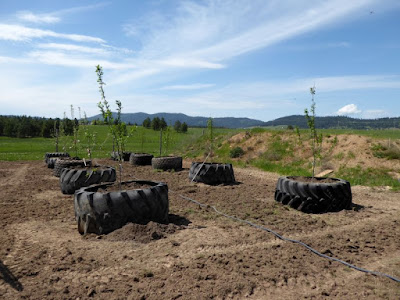 So there we go. We'll try the bees once more, and hopefully not have the issues we had last year.
Posted by Patrice Lewis at 9:20 AM