First escape of the year

Ah spring, when a cow's fancy turns lightly to thoughts of grass -- which (as you know) is always greener on the other side of the fence.

Yesterday afternoon I noted little Curly was out. He apparently had managed to push the bottom portion of a section of cattle panel away and slipped through, and was happily cropping the grass by the edge of the driveway. (You can see the pushed-aside panel behind him.) 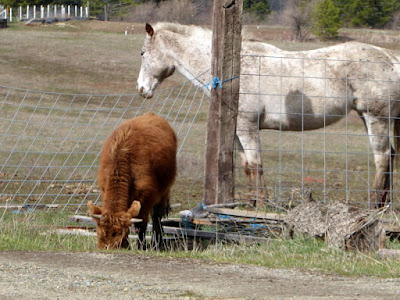 This wasn't an urgent situation, so after mentioning the First Escape of the Year to Don (who agreed it wasn't urgent), I straightened up and re-tied the cattle panel, then walked down to close the driveway gate.

This is when I noticed Shadow/Sparky (I can't tell the difference between these two ladies, they're identical), who had also pushed under the fence. She was further down the driveway, meaning she had been the ringleader for The Great Escape and Curly was merely following her example. 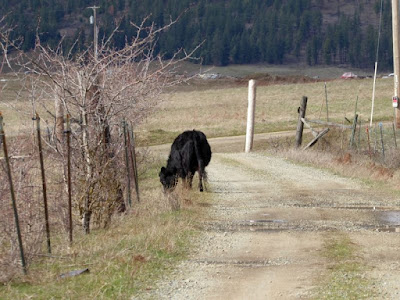 Needless to say, the rest of the herd was very interested in this development. 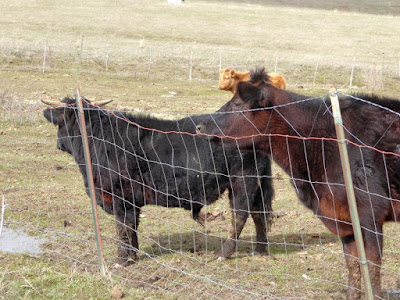 Later we rounded up both the recalcitrant critters and put them back in the woods, with the peanut gallery in attendance. 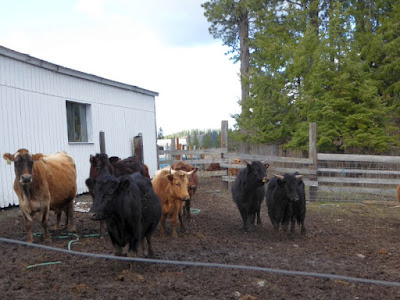 Shortly thereafter, I caught Dusty looking mournfully through a gate. "Hey, I want to escape too!" 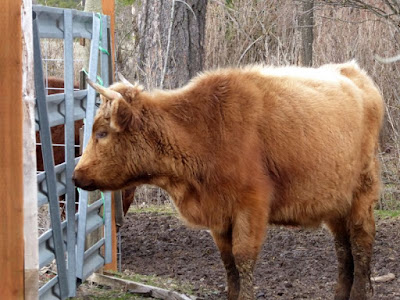 Fear not, dear, in a few weeks the pasture will be green and lush, and you'll be in paradise. Hang in there.
Posted by Patrice Lewis at 8:12 AM